In the late 1960's, the steampunk super robot that would become known as Autonomous Prime escaped from a laboratory bunker run by a team of renegade scientists. For a few years afterward, he went on patrol to protect the people of small towns on the Arizona/Mexico border. When it became apparent that his services were not necessary(or really wanted, for that matter), he retreated from the public eye for over three decades. In September of 2005, he arrived in Paragon City to get some refresher courses on effective crimefighting. In mid-October, he was granted a new hero license and chose to stay because of the epic battles that occur regularly. He often claims to have a fragment of the robot angel Metatron inside him, and has powers that seem to confirm this, including the ability to use a golden super mode called the Omega Savior Form. With an ego the size of a house and a sense of justice to match, Autonomous Prime has no qualms about dispensing socially constructive violence to those that prey on the innocent and defy the law.

Autonomous Prime became a member of the Eternals on July 15, 2007, during their 3rd year anniversary party. Some say that he really only joined them because of the group's name, though he has been a fairly productive member so far.

Autonomous Prime holds an interesting view of the world, to say the least. He seems to be a rather big fan of the "Super Robot" genre popularized by Japanese animation, comics, TV shows, movies and video games. As such, he frequently speaks of the power of courage, friendship, and a really good battle yell. He also really enjoys showing off, and tries to be involved in as many epic adventures as he can to display his power, even if it's little more than a barroom brawl in the Pocket D.

Complementing armor made of an impact-resistant alloy, Autonomous Prime has a geo-armor system which, in addition to amassing simple stones to deflect physical blows, has numerous functions to defend against a variety of assaults.

He can throw blazing punches, wield a fire sword, and spew flames. This may stem from the influence of the robot angel Metatron, due to a fragment of his soul within Prime's shell.

Autonomous Prime can fly. Since he has no visible means of aerial propulsion, this could also be due to Metatron's spirit inside him(but it's equally likely that it's courtesy of just how awesome he is). Though aerial battles are rather cool, he doesn't usually fight in the air for extended periods, due to the limitations of the CASPAR boots linked to the MAGI armor system. 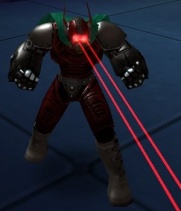 In addition to being able to temporarily increase his energy efficiency through concentration, Autonomous Prime can fire lasers from his EYES. As is often the case with this ability, they can cut OR weld, depending on what the plot requires. Also, he can do that thing where you hurl a bunch of ki at your opponents.

Autonomous Prime possesses advanced logic protocols. They allow him to not only recognize when someone is speaking metaphorically, but to separate information from other entities into two categories: "obvious nonsense", and "things that could be true". It is by no means a perfect system, but it surpasses the capacity displayed by most mass-production type robots(AKA cannon fodder), and in rare cases, that of limited-production models with the potential to determine their own fates. 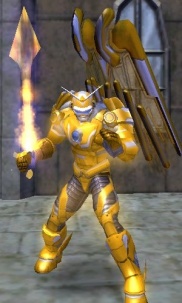 Awesome with a capital Awe.

Under special circumstances, Autonomous Prime can temporarily change into a golden warrior that exudes Awesome Energy. The ways in which his strength increases varies depending on the conditions that allow and even compel him to use the Omega Savior Form.

At first glance, it looks like nothing more than a replica of a Heat Hawk from the animated series Mobile Suit Gundam. However, it has a devastating effect when used against ghosts and other undead beings. In addition, while it cannot benefit from effects that directly increase the damage one deals with each strike, it is also immune to effects that would lower the damage output of all other attacks. Supposedly, Metatron himself bestowed this axe upon Prime as a gift for his 38th birthday.

Aside from the movement problem raised by the CASPAR boot system, he can get somewhat upset when people get involved in situations that can't readily be solved by Courage and Determination.