The Eternals formed in Paragon City, RI on July 3, 2004, by Sheeva, Psych Ward, and Blitzkrieg. 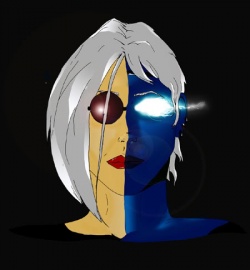 A young Eternal named Eden Spark awoke in a twisted, nightmarish future where the world is oppressed by an elite, superpowered force named the Imperials. She encountered a small, ragtag group of freedom fighters, who was left of the Eternals. She later learned that the leader of the Imperials was none other than Eden herself. In a powerplay to return her to the present, the Eternals confronted the Imperials buying her time. Many lives were loss, but she returned with dedication to alter the future. Eden saw warning signs, but did not know how to stop it. She grew desperate as time was running out, and the Shadow Wars were just beginning.

In a game of power and manipulation, Annabelle Croix murdered the mayor, forcing the government to revoke Crime Fighting Act of 1937 and forcing heroes to leave the city. In the midst of chaos, Annabelle led an army of super-powered clones into Paragon City. The Eternals took charge in leading the fight against them with many of the heroes who stayed behind. Battles broke out across different areas of the city while the heroes looked for weaknesses to destroy them. As the Eternals and others triumphed overall, many lives were lost especially those with the Eternals. To make matters worse, their leader Psych Ward decided to leave the Eternals and Paragon City forever.

As the battles played out all over the city, another plot revealed itself. Eden Spark confronted the villain Revenant and her future. He made valid points that the world needed to be policed by a select group of heroes, and to build a Utopia for its populace, just as she had seen. The choice was hers to make, and she chose to take her life. To ensure Revanent's future would never happen without Eden, Checkmate murdered the wounded villain. When the Infinites' leader Dapper John revealed his plan to shape the future in his favor, Checkmate murdered John as well, claiming, "You never quite understood why I do what I do, old chap. The world must have balance. I can have it in no other way."

A year had passed, and the city rebuilt from the aftermath of the Shadow Wars. The Eternals had disappeared from the public eye, but they were not gone. Settling into their new base the Aeternus, orbiting in Earth's orbit, the Eternals agreed to work with the government in order to rebuild their image. With Psych Ward gone, Sheeva missing, and Chaume dead, Ronin stepped up and led the Eternals in a search to find their missing comrades.In their personal mission, they uncovered a deadly plot. Malta had collected files and whereabouts to every meta human on Earth, and planned on wiping them out. Ronin vowed to find the Malta targets and offer them a place among the Eternals before Malta could eliminate them, thus fueled a war between the two.

With the death of Bryan Long, Mr Mirage began the Eternals Academy in Croatoa. He vowed to never let another young hero die due to inexperience. With that vow, he hired on heroes such as Eternals veterans Fleur de Lys and Sympathy. Others such as Tempestorm and Nimbus quickly joined his cause. The Academy flourished for two years, and its students got the education and training they needed to become the world's next big heroes.

Ronin recruited a group of vigilantes that were taking the fight to the Malta against the advisement of the supergroup's government liasons, Captain Infinity and Infinity Girl. When Ronin was kidnapped by a Malta cell in Peregrine Island, this new gang of recruits went after her. After her rescue, the team detonated the building, murdering a hundred Malta agents. Furious, Captain Infinity demanded Ronin to kick the team from the Eternals. Desperate to repair the Eternals' image, she agreed. However, Ronin recognized the importance of having those to push the law if needed, and secretly reformed the team as the new Eternal Knights.

The Infinites struck the heart of M.A.G.I. kidnapping Azuria. Mr Mirage led a team alongside his love interest, CIA Agent Jocelyn Powers to retrieve her. The team uncovered the Infinites were after the location of the Well of the Furies. In a race for the Well, the Infinites fled with the map to Greece. The Eternals managed to retrieve the map, but it was not a victory. Agent Powers shot Mirage in an act of rage and then herself. To save Mirage's life, the team descended into the Fountain of Zeus and retrieved the Well after confronting the three Furies and a battle with the Infinites. Mirage's life was saved, but he slid into a coma. 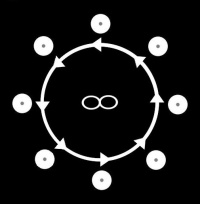 Mr Mirage awoke from his coma with a trail of murder, launching M.A.G.I. into a full investigation and manhunt. The Eternals stood aside, not knowing who to trust, even when M.A.G.I. Inquisitors showed them photos of Mirage with Ghost Widow. Reporter Samantha Wilder traveled to the Eternals Academy seeking answers. When she arrived, several powerful hooded mages attacked the school massacring faculty and students. Samantha fled as Mirage arrived, witnessing his power as he leveled the Academy.

Ronin formed a task force to find Mr Mirage and bring him to justice for his crimes. They tracked him down inside an ancient temple on an island in the south Atlantic Ocean. During the confrontation, Mr Mirage explained the mages were after the Well of the Furies and that the school was merely collateral damage in their destruction. After clearing his name, he went on to reveal a higher path for the Eternals:

"The Eternals have existed throughout history many times before the latest reincarnation. The Eternals' interjections shaped our very existence. Each occurrence through the ages, the Eternals averted the destruction of the World. Now, we Eternals must gather our forces in order to save Primal Earth and the Multiverse from the Coming Storm."

Mr Mirage had traveled to Rogue Isles to find Sheeva. He had learned at the temple that she is the last of the original bloodline for the Eternals. She also was the only Eternal who existed on every Earth within the Multiverse. The temple acted as a vessel as she converged the Multiverse into it. This act brought forth Eternals from multiple universes to Primal Earth. As each dimension folded onto Sheeva, her existence in each diminished into her Primal existence.

The Eternals are now preparing for the Coming Storm. While they work diligently to protect Primal Earth and the Multiverse, others seek to destroy it. A new foe has surfaced and now threatens everything the Eternals have vowed to protect.

The following 13 pages are in this category, out of 13 total.