Avaricio "Av" Zaldun lives up to his name: his sole defining trait is greed. Obsessed with wealth and gold in particular, Zaldun will do anything to obtain even small amounts. Though mostly unintelligent, allying himself with various shady characters throughout his career has allowed Zaldun to acquire small fortunes... though he also tends to lose them quickly. In practice, he is Rook the Vaulted's arch-nemesis, if only because he refuses to go away. However, they have a shared history that Zaldun is largely unaware of.

Born in France to Basque parents, Zaldun (pronounced 'sawl-doon' despite the 'z') spent most of his youth in England, becoming involved with street gangs at an early age. However, the spoils were poor, and hungry for greater wealth, Zaldun traveled Europe seeking treasure and easy job opportunities. Eventually, he found a kingdom that looked promising, and seeing little competition, he decided to become a gangster.

Soon enough, he realized that the King's men were practically gangsters themselves, and Zaldun had no success. His willingness to do dirty work for quick money attracted the attention of Ennio Di Gallo, a member of the Royal Army who had attained the rank of Knight. Di Gallo recruited him into his battalion, and within months, Zaldun became his second in command. Di Gallo, a man of great self-importance, was often called the "Knight of Pride," and along with his blood-brother Cormorán de la Torre (the "Knight of Wrath") jokingly referred to Zaldun comrade as the "Knight of Greed," even though he had yet to attain the formal title. 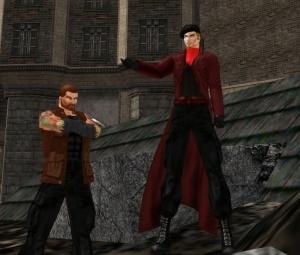 Di Gallo's self-importance became so great that he decided he would make a better ruler than the tyrannical King Karalius. Now calling himself "Alfiere," Di Gallo took Zaldun and several of his most loyal men and started a rebellion, which eventually grew into a civil war. For years, Alfiere and the self-titled Captain Zaldun led this campaign, attracting like-minded people: those seeking power and wealth for themselves. Occasionally, they would be joined by idealists such as "Eagle Eye" Evelyn O'Connell, who often grew disillusioned and left. Largely, however, Alfiere made no secret of his thirst for power, and likewise, Zaldun was quite open about his desire for wealth.

As the rebellion's military leader, Zaldun led various brutal campaigns across the kingdom. Idealists among the rebels heard rumors of Zaldun's crimes, but curiously, his campaigns tended to have large amounts of collateral damage, and more importantly, riches whose owners no longer needed. Alfiere assured his men that although he was aware that Zaldun employed less than ethical tactics, they were a necessary evil, and insisted that the rumors were grossly exaggerated. Zaldun's tactics, while initially successful, eventually became counterproductive. Zaldun's men were growing more loyal to him than to Alfiere, mostly because of the perks of the job. Things were exacerbated when, disappointed by the length of the war and the lack of progress, Alfiere took leave of the country to muster support elsewhere, leaving Zaldun in full command. Upon his return, he found that Zaldun had depleted most of their resources and had essentially driven the rebel army into the ground. Arriving with new funding and resources, Alfiere's return was met with great enthusiasm. With Alfiere's continued backing, Zaldun was able to avoid any backlash from his men, and in fact, continued to enjoy taking whatever they wanted from both the Royal Army and innocent civilians- material or otherwise.

What Zaldun never realized was that, from the beginning, Alfiere meant for him to be a sacrificial scapegoat. Alfiere would have preferred for his blood-brother Cormorán to lead the army (as he was a much more skilled tactician), but he was more useful using his position as governor to act as a double-agent. In Zaldun, Alfiere saw a greedy thug who could be easily manipulated. Zaldun's methods would ensure swift victory (Alfiere quickly realized this was not to be the case), and once in power, Alfiere would discover "new evidence" of Zaldun's atrocities and have him executed. Zaldun remained and still remains blissfully ignorant of this, believing that Alfiere valued his intelligence and skill. 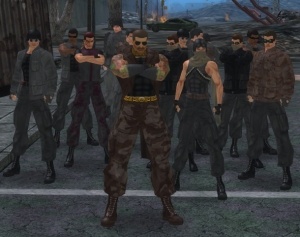 Captain Zaldun during the later stages of the war

Eventually, though, Zaldun would be the one to initiate betrayal. Shortly after the King's assassination, the chief advisor (the prince was not yet old enough to take the throne) decided to use that pit of greed against the rebels. Approaching Zaldun and several others, the government promised them enormous compensation if they agreed to turn Alfiere over to them and end the war. Zaldun's friendship with Alfiere was largely one of convenience, so when a better offer came along, he was quick to sell out. Alfiere was soon captured (along with several lieutenants who had not been swayed by the King's men), and sentenced to death.

A few loyal supporters remained, and after some persuasion, Zaldun agreed to help rescue Alfiere. Despite this apparent show of remorse, Zaldun's motivation was once again greed- Alfiere had hidden valuable treasures from the King, believed to be worth far more than what Zaldun had squirreled away, and which Alfiere had promised to give to him once he came to power (the dangling carrot, so to speak). Zaldun and the others stormed the execution grounds, causing a riot. The King's men quickly fought back; fortunately, Alfiere managed to escape in the confusion. Zaldun, however, did not.

Realizing that Alfiere knew of his betrayal, Zaldun had no delusions that his old friend would come for him, and cooperated with the government's interrogation sessions. Despite the information he willingly gave, Zaldun was still imprisoned for seven years. At one point, the guards removed his right arm as punishment for killing a cellmate, the last straw in a streak of violent behavior.

Eventually, the royal government was overthrown by an invading democratic nation, and Zaldun was freed along with several other prisoners. Showing no gratitude to his liberators, Zaldun quickly fled before his own war crimes could be revealed, and immediately sought out his stashed treasure. Some of it had been looted, but he had enough to buy himself a new arm, which he immediately covered in gold. Now free, Zaldun began to track down Alfiere, and was surprised that he left almost no trace following his escape from execution. Doing some more work, Zaldun managed to track him to America, but once there, the trail went cold. As it turned out, Alfiere had not been seen in nearly five years- but curiously, someone named Rook the Vaulted had appeared around the same time, living in an apartment previously owned by Alfiere, with Alfiere's alleged daughter at his side.

Zaldun realized that if Rook had killed Alfiere and taken everything he had, he likely knew where his promised treasure was hidden. Seeking the mysterious Rook, Zaldun has come across Bad Dream, who was also curious to find some answers. Zaldun has agreed to work for Dream, and together they both hope to uncover the mystery of Rook's identity, and Alfiere's disappearance.

Since joining Black Tie, Zaldun has come into conflict with Psi-Tox, who at various points beat and humiliated him, forcing him to acknowledge her superiority and even beg for his life. He sought a chance for revenge when an amnesiac Psi-Tox appeared, claiming to be Lauren Andrews, an Arachnos widow sent by the organization to work as Zaldun's assistant in an attempt to appease him after her threatened to blackmail an important member. However, "Laurie" has proven to be an asset to Zaldun's mercenary operation, and the two have developed a close partnership. To Zaldun's surprise, however, the real Psi-Tox appeared with alleged proof that Lauren is her clone. Zaldun doesn't honestly care, and just knows that having Laurie around is good for business.

After a long absence, Bad Dream returned to his organization with a renewed purpose. He negotiated a truce with many of Black Tie's rival organizations in the Rogue Isles... including the Shadow Spiders to which Rook the Vaulted belongs. While unable to pursue Rook's treasure, Zaldun has found consolation in his new job: providing funding for Black Tie through his various robberies. Bad Dream has wisely used Zaldun's greed to his advantage by allowing him to keep twenty percent of what he brings in- the more he contributes to Black Tie, the more he gets to keep for himself.

Since his release, Zaldun has collected quite a few cybernetic parts. His gold-plated right arm is attached to implants on his shoulders that act as support for its tremendous weight, and contains hidden dart-launchers and gas sprayers that allow him to poison his victims. In addition, he has a cybernetic eye and mechanical enhancements on his Achilles tendons, all of which were necessary after suffering injury due to his own stupidity.

Other Notes and Trivia