This is the continued character history for Ava Adore. The items below are things that happened in game and are generally considered to be common knowledge, however if you are unsure please contact me in game as @Ran Kailie or email to Ava Adore.

Never one to hold any particular love for the costumed capes and tights more abundant in the city since the end of the first war, Ava was weary of registration with Hero Corps. She resisted the push for creation of a flashy heroic identity much to the disappointment of Hero Corps, looking to turn the young Rikti War survivor with the dark past into another poster child for their company. Ava stuck with plain and comfortable clothing, and in rebellion chose the name of a song as her moniker. She held no hopes of a private life beyond her meta human activities, she lost that hope when the Rikti bombs tore apart her life. In exchange for her attitude, and lack of cooperation Hero Corps gave her the worst jobs and the lowest pay they could manage.

Determined to try and get her life back under control Ava endured the humiliation of the first few weeks of training. She forced herself to meditate and to return to careful control of her berserker through calming techniques. No better then the people she had faced in the halfway houses the Hero Corps trainers derided her for her appearance, convinced she was nothing but a waste of time. As Ava began to suppress her berserker she began to lose many of her abilities, including most of her impressive strength, but her telepathic, psionic abilities began to improve vastly.

However the trainers were convinced she couldn't possibly be the King's Row Terror they'd read about in the news. The terror that ripped apart whole gangs and left dozens brutalized, how could such a small girl have managed it. Her control over kinetic energy was formidable and her strength was still above that of a standard human, but the trainers dismissed her as nothing more then an exaggeration by the news media. It took four weeks of grueling training before she was able to pass the final tests for registration. Her victory was barely won however, her trainers classified her as a defensive only leaving her restricted in her abilities.

She began work, taking whatever work Hero Corps gave her, wallowing in sewers, chasing down Vahzilok zombies, and summarily completing every single one of the worst jobs they could throw at her. Determination drove her, often spending days awake practicing her psionic skills, and honing her telepathic and empathic skills, and learning to use her other abilities, gained through her forced fusing with a rat.

It was chance that lead her to meet Midnight Paw one night in Pocket D. Ava found herself here often in her off hours, still without a true home, and needing the crowd to practice honing her empathic and telepathic skills. Pocket D wasn't somewhere she enjoyed but at least it was warm and she knew no one there could lay a hand on her. Her conversation with Paw lead to an invite to see the headquarters for an organization she helped run.

Hours later Paw and several others have managed to convince Ava to join with their group, the Anthropomorphic Superheroes of Paragon City American (ASPCA). Paw saw what no one else did, Ava's complete hatred for her appearance, no matter how useful, and her lack of acceptance of herself. ASPCA provided Ava with the foundation to integrate back into society. They taught her to cope with a society that couldn't quite accept her appearance and her difference. She now had a roof over her head, space to expand her knowledge and work with her own intellectual endeavors, and the first group of people she found herself lending any amount of trust to since the war.

Slowly she became more social, but unable to become friendly, especially with strangers, still often assaulted with insults and other obnoxious slurs, she kept mostly to herself, even during work. It was luck perhaps that she would meet Brendan Aft one night at Pocket D while practicing her empathic and telepathic control. It is safe to say that since that day you haven't been able to find one of them without the other being far off, but they were practically attached physically for the first few months. A strong friendship that neither of them immediately identified as anything more, Ava found herself caring more for Brendan then she had anyone in a very long time. She found herself giving him advice on the situation he was currently in with his friend Bridget Queen (Neo Trick Shot), who was currently in the middle of three men including him.

Brendan and Ava both were quite naive in regards to love, and relationships, Ava more so then Brendan given her lack of real contact with people in over 5 years, but even she could recognize a bad situation for him emotionally off the bat. It was this first introduction to Bridget that would initially color her opinion of her, that she was so willing to manipulate the emotional strings of someone she claimed to care about and love. For Ava, who very much saw the world at this time in stark contrasts of black and white, she couldn't see that it was tearing Bridget up just as much as it was Brendan or the other men involved.

During this time Ava also found herself becoming closer to Bonedancer Ragdoll, the enigmatic adopted daughter of Bridget Queen. She was at first hesitant of Ava and her friendship with Brendan, her self proclaimed hero, but they really hit it off, Ava pretty much becoming more of her big sister. Eventually the situation with Bridget would be settled, and she would end up with Devin (SincereAgape).

It was obvious to most people that Brendan and Ava's relationship should have been more then the friendship it was, however, but neither of them saw it, or acknowledged it. Mindre the blunt and dimuitive T'Sharii huntress however would see to it that would change, and pointed it out to them both in her normal fashion. The pink elephant in the room was now acknowledged and neither of them could willingly ignore it, nor did they want to. Taking baby steps they became a couple, slowly building up their relationship but never forgetting their were friends first. 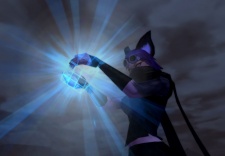 It was during a sanctioned contract job, ordered to retrieve specific records from a Crey Industries database for a contact, that Ava would come across information that would prove to be the first in a series of shocking, life altering revelations. Much to her dismay she found information about her mother, and many of her projects, specifically the projects related to her temper and berserker nature and the project in Woodvale that had been in the lab that had caused her mutation.

Blindly she began to systematically raid Crey facilities to access computer systems stealing any information she could find. She would find information pertaining to her, retained by Crey, and about her family. Her world began to crumble, it was a set of specifications she obtained from Crey however that gave her pause. The specifications were for a experimental genetic suppressor, a device that could hold a profile to change DNA strands from active to dormant in a subject. Determination drove her to bring it to life, applying every bit of information she knew, or had learned over the months with ASPCA.

She didn't have much to lose, almost everything she had known in the world had just gone up in smoke before her eyes, and her black and white walls had crumbled around her leaving her to take those first tentative steps into the shades of gray. She wanted, above anything though to be normal, to have something that had been taken from her back, and she succeeded.

Upon completion the device enabled her to be physically normal for the first time in five years, and she struggled to marry her self hate, and suicidal drive for vengeance with her inner desire to be normal, wanted and at peace. Without Brendan its possible that this could have been the last thing to send her over to precarious edge and completely into the darkness, but with his help, and understanding and unwavering acceptance of her no matter what she remained firmly rooted in the gray. After five years, beliefs, feelings and ideas that Ava held on to with conviction were torn down and discarded.

Inner Battle: The Will to Live

Ava also found herself strongly desiring to live, and to thrive, she'd found happiness with Brendan, but many things she'd previously accepted as fate were now standing directly in the path of her enjoying that happiness. She was ill, very ill to be precise, severe radiation poisoning, of a type most people would not managed to survive and live with. But Ava's enhanced metabolism and immune system managed to keep her body restored ahead of the constant cellular decay. However it would only be a matter of time before the rate of decay became higher then her body could regenerate. She had 10 years more, tops based on her own study of her body's cellular decay, she now had something to live for and she wouldn't be able to live to enjoy it.

A battle had begun inside her, over her feelings, her illness, she started to push everyone around her away, to cut herself back off. She loved Brendan but she couldn't let him become so attached only to watch her wither away and die. It had taken her so long to get back to this and now it was being taken away from her again. It would take a crisis with Brigit Queen (Bonedancer Ragdoll), to knock Ava out of her self pity slump.

To this day Ava doesn't really know what happened with Brigit, only that something was wrong and she was convinced she had to leave, to save everyone else. It meant she would have to sacrifice herself for the greater good. Haunted Ava saw herself reflected in Brigit, she knew Brigit was older then her young body let on, but she was being forced to give up everything she had worked so hard and finally received for everyone else.

It was Ava that Brigit came to before she went, she told her to tell everyone else goodbye, Ava pleaded with her, asked her to think about her mother, about Brendan. But the pleading would do not good, Brigit was convinced this was her only course of action. Ava failed to talk her out of it, and Brigit has been missing since.

Brendan tumbled into his own form of despair, and as much as he wouldn't talk about it Ava promised herself to never be the reason he was in that sort of pain if it was within her power to fix. She became a woman obsessed, working day and night during any free hour she could get to find a cure for herself. Any other time she had was spent with Brendan, helping him through the loss of Brigit who had been like his little sister. Ava had a mission and she swore to herself that she wouldn't fail again.