Once, in another dimension, there existed a proud young prince, groomed to succeed his family's mighty empire. However, the plotting of his family's rivals saw the youth fall into the hands of the Rularuu Slave Lord Chularn. He attempted to escape many times, winning only steadily harsher punishments, until one disastrous confrontation left him all but dead.

Drifting in the void between dimensions, the Prince was revived by a sinister spirit there dwelling. Though it was at the price of his true name, the Prince had finally won his freedom, able to return to his people and his family... or so he believed.

Upon discovering his pact with the spirit, an ancient enemy of his people, the empire declared the Prince an exile. Hunted by his own people, the Prince fled back to the Shadow Shard, escaping through the only portal he could find, and finding himself in a new world...

Avowal is a Dual Blades/Willpower Stalker created by Fox Lee because she really liked how the "samurai" belts looked on a guy with a bare top half, and because cannonballing Avatar: The Last Airbender made her remember that exiled princes give her a huge femboner. She is slightly embarrassed to admit that he is totally inspired by Prince Zuko. But only slightly.

(This character is a remake/redesign/replacement of the former character of the same name.)

"What does tomorrow want from me
What does it matter what I see
If it can't be my design
Tell me where do we draw the line?"

- Poets Of The Fall, Where Do We Draw The Line

Avowal is defined mostly by pride - some of it justified, a lot of it arrogance - and stubbornness. These traits were bred into him right from the start; heir to a hotly-contested throne in a proudly warlike nation, he was conditioned from the beginning to be both strong and ruthless, and to think of himself as being above others in the natural order of things. These embers were only stoked by his long imprisonment, and though they led him to folly more often than not, they are also what gave him the tenacity to survive.

More often than not, his lot is one of frustration. Despite his truly impressive skill and strength, he constantly finds he is never good enough; no matter how far he advances, there is always a bigger fish. Every time he escapes one form of imprisonment, he finds himself trapped again, whether it's by force or necessity. This is only emphasised by his oddly lawful nature; in spite of himself, Avowal has an enduring sense of honour, one he is hard-pressed to defy. Much of his rage is eventually directed within, becoming more a hatred for his own "weakness" than a hatred of his enemies.

Avowal is far from being truly "Heroic", but is also not all that "Villainous" - his true nature is more self-serving than malicious. His life is defined by a single goal; to gain strength enough to be free. He is not without conscience, but this yearning is - at least for now[1] - strong enough that he will do most anything in pursuit of it.

Avowal hails originally from an alternate dimension which, like the "main dimension" of the game, contains a permanent gateway to the Shadow Shard. Though he was a Prince in his native world, he was captured at a young age by underlings of Chularn the Slave Lord, overseer of the Shard's Factory Cubes. Such a fate was not unheard of in Avowal's world, but attacks by actual Rularuu raiding parties were exceptionally rare; he suspects still that his family's treacherous political rivals were the true reason he fell into the Slave Lord's hands.

Though he was driven more by arrogance and anger than heroism, the prince gained a reputation for boldness and defiance amongst the slaves, and attempted to stir the thoughts of rebellion amongst them whenever he had the chance. His various attempts at escape earned little more than harsh punishment, but his pride would not be quenched. Ultimately, it led him to a final, audacious, disastrous attempt to slay Chularn. Thanks to his remarkable skill with blades and stealth, the young prince did manage to strike down his wardens and put his plan into action, but his abilities proved predictably inadequate in dealing with the Slave Lord.

Utterly defeated, the prince was left for dead, his body tossed into the void between dimensions. Indeed, he would have died there, had not a sinister spirit lurking in that ethereal plane approached him with a bargain. His life was saved, in exchange for a "favour" to be redeemed at a later date; a foolish bargain, to be sure, but with his life at stake it seemed the young prince had nothing to lose.

When he returned home, however, he was immediatedly arrested by his own family's forces. The spirit with whom he had bargained was an ancient enemy of his family's empire, and his dealing with it earned him a sentence of exile regardless of his status. Still in shock, he fled back to the Shadow Shard, seeking a dimensional gate to anywhere but home... and stumbled into Firebase Zulu. Desperate to escape the Shard before he was captured again, he attempted to fight his way through to their portals, leading to his defeat and imprisonment in the hands of Paragon City authorities. When he was finally liberated by Arachnos during a broad-scale prison break, Avowal had little choice but to go along with their wishes.

Avowal's time working for Arachnos came to an abrupt end when he had the misfortune to run afoul Riot Gear. Although they lacked the authority of Lord Recluse, they also promised a much more immediate threat as long as he stood in their way. Failing Arachnos meant he had to turn somewhere for help, however, and thus was forced into his most recent bargain. It may seem the least arduous of his many prisons, but then again, few people keep score as meticulously as D-38. 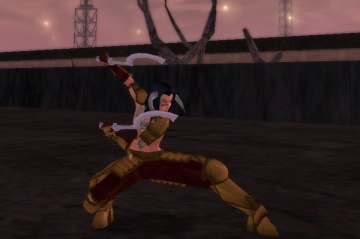 Due to his family situation, the prince was trained for combat from a very young age, and was fortunate enough to learn under his land's most accomplished swordmaster. He took his training very seriously, and did his best to maintain it even when he was deprived of both master and sword. His fighting style is fluid, dynamic, and quite beautiful; his form emphasises speed and flow over strength. In accordance, he is extremely agile and light on his feet, naturally inclined to stealth and silence.

The prince can also use some minor magical spells, mostly protective or utilitarian in nature. He is at best a novice magician, however, and relies on these talents only as a last resort.

The prince carries with him two exotic swords, most similar to the Egyptian khopesh in this dimension, which are empowered by the magic of the pact spirit. In addition to these, he carries a number of magical charms and trinkets that supplement his abilities, and wears light, largely ceremonial armour reminiscent of traditional Japanese stylings.

The Prince is a man of many weaknesses, most of them emotional. He is arrogant, hot-tempered, broody, selfish, and bitter. He always thinks the worst of people (though to be fair, he's usually justified in this) and can't bring himself to trust anybody, even when that would be in his best interests. His pride and anger make him act rashly more often than not, and he rarely fully considers the consequences before acting.

He's also a bit on the fragile side, physically - he's quick and agile, but not tough. Thanks to his extradimensional origins, he's also quite prone to catching mundane illnesses, due mainly to a lack of exposure during his formative years.