She has collaborated with Dr. Aeon in the past, and continues to do so - the two scientists maintain a cordial and relatively amicable working relationship, with Azari often consulting the more experienced genius for advice. She also works for Arachnos science under the general authority of Dr. Aeon.

Azari is friendly and outgoing, and tends to joke a great deal about nearly anything, often somewhat inappropriately, as she doesn't tend to deal with sensitive topics very well, for the most part. She's also an incorrigible flirt, rather pervy, and reasonably affectionate even toward new acquaintances.

She can also be rather unstable - while the above describes her usual behavior, she can become more unhinged at times, going into full-blown 'mad scientist' mode. Her unstable personality seems to be at least slightly tied to her shapeshifting ability, as it only became pronounced after she became a shapeshifter, and it remains more stable as she spends more time in a single form. 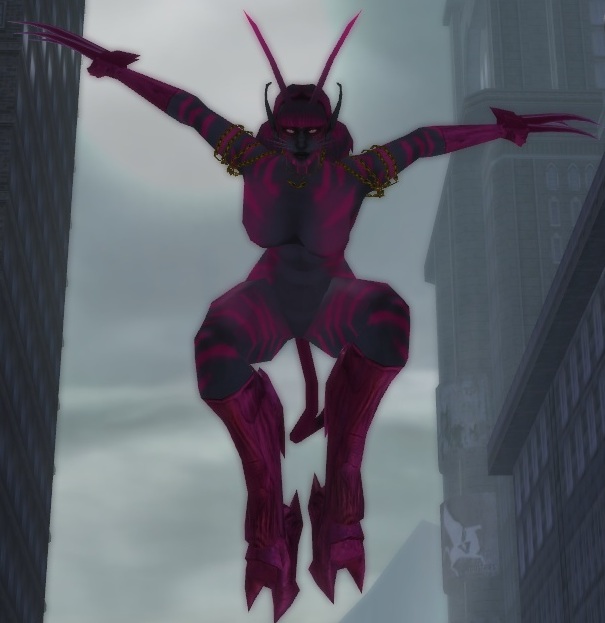 Azari's powers are primarily a result of her own experimentation. They are currently quite stable, and she has full control over her shapeshifting, allowing her to mimic nearly any imaginable shape, from an inanimate object to a person. She favors chimeric forms, combining various vastly different features.

Her powers are inherently unstable - without any assistance, she's unable to maintain a form for very long, and requires constant concentration in order to hold any shape at all. Her 'natural' form is a viscous puddle of opaque liquid with a shimmering surface. The chains she always wears provide a stabilization system in order to maintain her form, allowing her to concentrate only briefly in order to set her form, then remain stable until she chooses to change. She can sink these chains into herself in order to hide them when mimicking others.

She is very good at copying body shape and composition, as well as mannerisms, movement, and vocal intonations, to the point where visually and audibly, she is indistinguishable from whoever she is mimicking, and can even pass cursory scientific investigation such as body-scans and the like. Typically only physical samples, or some sort of magical testing will reveal her as an impostor physically. However, she has no similar ability to copy personality or knowledge, and typically cannot maintain a convincing act for very long, so her personality and behavior tends to be an obvious giveaway to anyone who knows the subject well.

Much of this is known to the right people. However, please ask before using anything that's not clearly common knowledge if you want to interact as though you know something about her.

Christine Kalen was born in Paragon City. Her parents were ordinary citizens in pretty much every way - her mother worked at a jewelry store as a sales clerk, her father was an accountant for a local Ford dealership. As a child, she showed a tremendous aptitude for learning, leading her parents to place her in one 'gifted' program after another for particularly bright children. She took to it even from an early age, and her interactions with other children were strongly colored by her clear mental superiority. She quickly developed a tendency to stick to herself and read. Growing up in the early days of the computer age, she was using a PC XT by the time she was three years old, and writing her own programs by the age of six. She still swears by IBM Model M keyboards.

Christine's intelligence led her from one gifted program to another, leading to her getting an equivalent high school graduation by the time she was 13, and getting a scholarship to Paragon University. Despite her intelligence, by this point a very mercurial personality was already showing - she often switched her interest from one project to another, one subject to another, but tended to manage to keep them straight in her head, often running several completely unrelated projects simultaneously. She showed a particular interest in various fields of biology, and in studying mutants and metahumans of various types. After getting her first four degrees, she got a research and teaching position at the university.

She was 17 when she got a research and teaching position, teaching a small class of advanced students, most of which were considerably older than her. Her work was sound enough to receive a reasonable amount of cooperation from various hero organizations and metahumans, allowing her to study a wide variety of subjects with various powers. She grew a particular interest in the barely-human examples of metahumans, and became convinced that it was possible to allow normal humans to change their shape at will to allow them to become stronger and more capable - the comparative weakness of normal humans, particularly if they did not 'waste' a great deal of time on 'useless' physical exercise was something she became particularly irritated at.

Her early experiments were hardly extreme in the slightest. She was careful, documented her procedures carefully, observed strict safety precautions, and in general was a model example of a scientist experimenting in 'questionable' fields, but observing strict ethical guidelines to make sure her work was for the betterment of humanity, and didn't result in abuses. During this period of time she also surprisingly became much more social, friendly, outgoing, and generally able to interact with wider numbers of people. For five years her research proceeded quite well, and she made a number of breakthroughs, some of which formed the basis for new developments in medical science that could stimulate the regeneration of human tissue and organs.

It is thus far unknown what, if anything, triggered her change of attitude around the age of 22, but it was rather sudden when she began bypassing safety procedures and conducting more extreme tests. She wasn't particularly open about them, and her sterling reputation kept any suspicion of wrongdoing away from her for quite some time. Her work advanced by leaps and bounds when she threw caution, safety, and ethics to the wind. It seemed that every month she was publishing a new paper with more radical results. These caught the eyes of some people in the less-than-respected scientific community, including Dr. Aeon. They collaborated by correspondence briefly, and it was not long after that Christine tested a still-unknown serum on carefully chosen but seemingly random students on campus. All of them developed extreme mutations - three died, as their organs mutated into incompatible forms. Another twelve were crippled in the process, their varying mutations being extremely non-beneficial. Dozens received benign, superficial mutations that provided no significant advantage, but a handful came out of the experiment improved in a variety of ways. Since she wasn't suspected, Christine was able to participate closely in their 'treatment' during which she gathered vast amounts of important data. It was her continuing experiments on the various subjects at this stage that led to her involvement being discovered.

When Christine's involvement in the mutations was discovered, she was quickly taken into custody by PPD forces. However, this was apparently fully expected - before she even reached the police station, an Arachnos flyer attacked the police car carrying her, rescuing her from police custody and escaping with her. Simultaneously, her laboratory was attacked by Arachnos troops, who cleared out all her experiments, data, and files. Parts of her files that the PPD managed to copy before the attack showed her involvement with Dr. Aeon, who appeared to have encouraged her and helped her plan the experiment, as well as her extraction if she was caught. Christine herself was taken to Aeon City, and Dr. Aeon supplied her with a lab and all the proper equipment she needed to continue her experiments. She transitioned quite easily into a position at Aeon University.

Her research proceeded at breakneck speed under Arachnos supervision now. With no limits on what she was allowed to do, no need to cover up her questionable experiments, and the data she gathered during her field test at Paragon University, it wasn't long before she began producing useful human enhancements. Arachnos supplied test subjects, and her experiments went from a 15% rate of useful success to well over 60%. None of the transformations were tremendous in their scope or ability, but they did seem to be steadily improving. At the same time, she was perfecting one to use on herself, designing it to be perfectly compatible with her. It took her several years to perfect it. It was nearly a year after the Second Rikti War that she finally tested it on herself. The serum worked - to a point. She was able to shapeshift to nearly any form she chose, but there was extreme instability. She wound up being unable to hold any form for more than an hour or so.

Luckily for her, a recently joined Arachnos agent caught an interest in her research after reading a paper of hers. When she discovered Christine's condition, Akelha Sunslayer took an interest and involved herself. Neither Christine nor any of Arachnos' other top scientific minds found a solution, but Akelha engineered a technomagical device that would assist Azari in stabilizing her condition. Once stabilized, her shapeshifting has proven to be extremely powerful, giving her the ability to increase and decrease her mass and change forms at will. Throwing herself fully into this, Christine changed her name to Azari Chimera, and now only occasionally takes forms that look human, typically choosing instead to take a chimeric combination of various appearances. Since then, Azari and Akelha worked together in attempting to duplicate their success, but with no luck - Azari's formula is too specialized for her own individual genetic makeup, and typically has fatal effects on others. It would take years of research to specialize the formula for each individual in order to duplicate.