Banana Bongo is a remarkable specimen of mentally disturbed space chimp having chosen a life of crime rather than the glitter of Hollywood. No one really knows what justifies his actions but statistics show that ape-related crimes tend to be motivated in most cases by the search for bananas.

The Origins of Banana Bongo

The legendary canon man from Zanzibar, the chimpanzee extraordinaire Banana Bongo toured Africa throughout the 1950's, performing the most daring stunts for the amazement of the crowd. Things went well for years as Bongo grew bolder and subsequently richer with every stunt,surrounding himself with the most exquisite fruits and the most luscious babes. Then something went horribly wrong.

For the grand finale of his show, a number never performed before, Bongo was to be propelled to the Moon and then come back somehow. Only Bongo didn't come back and everyone left him for dead until a few years ago. Exposed through extensive lengths of time to the void of space, Banana Bongo returned with cosmic powers as well as a mildly decent intellect; only to find all his assets sold and the babes gone.

Half crazed by the experience, he proclaimed himself the Emperor of space where he teleported his luxury palace (killing the new occupants in the process) and declared war on the world's superpowers for their foolish invasion of his land.

An Incredibly Boring Debate in the Scientific World 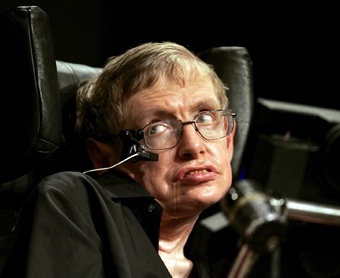 The source of Banana Bongo's powers has been widely discussed during the last decade without anyone offering a satisfying answer. Chimpanzees are known for their superhuman strength, which would of course qualify Bongo as a natural villain but wouldn't quite explain the cosmic abilities of the ape.

Astrophysicists have been divided on the matter of the acquisition of such powers, some arguing that the sheer act of traveling through space unprotected cannot grant anyone superpowers, and that he must therefore have always had them and concealed them for some reason. Those scientists recommend, as a consequence, the extermination of all chimpanzees for preventive matters. Others claim that the radiations of space must have altered the genome of Banana Bongo, hence making him a mutant. Some random tribes of Africa and Utah maintain that he is some sort of god of doom and that people should leave him alone and mind their own business.

The recent acquisition, by a laboratory, of samples of the criminal's feces has led the theoretical physicist Stephen Hawking to think that, in his cosmic travel, Banana Bongo might have been sucked into a Black Hole. Nothing yet allows scientists to confirm this theory, as it raises the other question of Bongo's escape from the phenomenon, which can itself only be explained by the God-of-Doom theory that everyone rejects because we are civilized people.

The normal consensus regarding the powers of Banana Bongo is to classify them as of scientific nature, since nobody exactly understands what they are anyway. 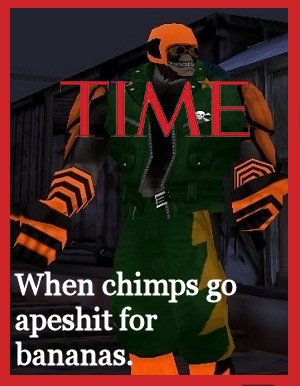 Banana Bongo suffers various troubles of a neurotic nature. He experiences frequent fits of paranoia as well as brutal bursts of anger, sometimes without any obvious exterior cause.

Bongo believes himself to be under constant watch from the CIA, FBI, KGB, Scotland Yard and generally most intelligence agencies in the world. As a self-defense mechanism against these threats he naturally tends to rely on his mastery of disguise to fit within the crowd of ordinary citizens, with a very relative efficiency. Banana Bongo could, without trouble, blend in most urban environments, had it been without his random and unforgiving explosions of rage.

His paranoia helping, Bongo cannot remain in a public place without feeling observed and resents strongly the staring eyes of strangers. He found himself, on many occasions, yelling and beating mercilessly people (even villains of high rank) for a misplaced word or often just because they happened to be there. His fury appears unstoppable and on occasions fueled on itself. As an example, nothing angers the ape more than being ignored, thus starting occasional maelstroms of verbal and physical violence in the Pocket D (without anyone noticing).

Considered remarkably ugly even within his own specie, Banana Bongo relies on violence to mate. The rest of the time it's banana peal and onanism and then go to sleep. 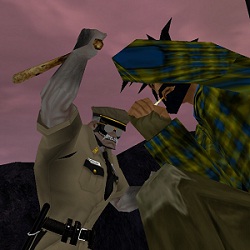 Bongo's aliases are far too numerous to be listed. There has been many accounts of citizens being puzzled by the sight of an uncommonly hairy policeman, pirate, reporter, prostitute or minister in the Rogue Isles; some of them are believed to be linked to the chimpanzee's actions.

On rare occasions those accounts have been supported by photographs. It has been suggested that the infamous Sharkhead Police Department abuse pictures, which as everyone remembers sparked the violent Sharkhead riots of last year, could have been originated by Banana Bongo. 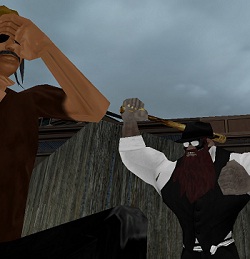 Banana Bongo makes enemies all the time, even when he sleeps, even when he doesn't know it. His never ending assaults toward society associated to his sense of drama earned him a pretty long list of antagonists. Crossing the eyes of the powerful primate is enough to make it a personal business and, in his mind, even the walls have eyes. Banana Bongo hates everyone and everything, but particularly the things and people he knows.

It is hard to establish a list of Bongo's nemesis, since most of them consider him an empty threat and the others have already been dealt with. Police records on the villain should be released soon and may allow an estimation of their number. 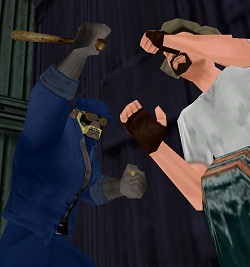 Bongo might partner up with anyone who can tolerate to be insulted and beaten up senselessly. That doesn't make many people. Should he ever need help in the completion of his crimes, Banana Bongo would rather be torn to pieces, come back, be torn again and ultimately prevail.

Surprisingly, many eyewitnesses have recently testified seeing him pair up with the infamous Ded Lev, a former Spetsnaz whose ties to the cosmic chimp can be traced back as far as the time they both spent in Zanzibar. Bongo and Lev's relationship seems to be an awkward mix of appreciation and supreme contempt. Some experts argue that the only reason why they get along is that Banana Bongo has remained unable to kill his partner despite several attempts and that Dead Lev on his side has never quite been able to defeat the ape's battle spirit even by beating him to a pulp.

The Search for Bananas

The notorious evildoer known as Banana Bongo actually doesn't care much for bananas. The delicious fruits constitute of course the essential of his diet, but bananas are nothing more to him than what donuts are to a police force. Nothing in fact justifies the chimpanzee's nickname, except perhaps the rampant racism of modern newsrooms. 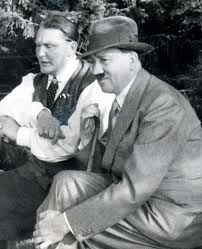 Again it was what everyone thought until recently. Evidence was uncovered that among the many possible motivations for his crimes, Banana Bongo might have undertaken a hunt for the greatly prized pink bananas and more particularly for the Fuhrer's own personal stash of the unusual fruits. Studies have made it likely that Adolf Hitler himself, the most notorious vegetarian, might have been fueled by the mysterious power of pink bananas. A conversation recorded between him and one of his Nazi pals contains the following:

In the course of last year, Banana Bongo has attempted to track down the members of the Bananen Korps, a squadron of the most vicious SS who ever lived and who remained faithful to Hitler's will even through all those years. Despite a few promising leads, the cunning Germans have managed to elude Bongo's fury and to remain hidden from the world's sight, protecting what can only be fathomed as an incredible Nazi pink banana treasure.