Blackslash could be said to be an amalgamation of Rorschach, Batman Beyond, and Rachel Summers.

She wasn't exactly planned that way, but her primary costume is a Batman Beyond inspired alternate costume originally made for Night-Girl on a whim, and was interesting enough to be given to another character who was without a decent costume-- a Rorschach homage named Black Zodiac. In trying to come up with why, exactly, she would have a costume that looked like a derivative of Night-Girl's, she was changed to be NG's daughter from the future (or she claimed to be, anyway). She was then renamed, given Claws and Super Reflexes, and revised to be from a Days of Future Past style alternative future for the Liberty League in which Nemesis reigns and only a few true heroes remain.

She was a fallen hero, as her last remnants of sanity were finally destroyed when she realized that her actions in this timeline have prevented her own birth.

Blackslash died in the events described in the story Mother, Mother.

Blackslash was a sociopath. She spoke as minimally as possible, and had only been seen to make one joke in observable history, toward the end of her tenure with this time's Liberty League. Unfortunately, that brief improvement in her social skills was shattered when she discovered that she would not be born in this timeline.

Overly serious, she took everything literally, and devoted every waking moment to her work. Blackslash was never known to engage in any sort of leisure activity-- dancing, games, reading for pleasure, movies, none of these things interested her. All of the time she didn't spend on eating, sleeping, or fighting/infiltration, she spent researching this timeline and comparing it to her own.

Blackslash had no powers. She did, however, possess a spiritual bond with Night-Girl that allowed them both to find each other over great distances.

Blackslash appeared to have had training in some unknown form of martial arts that she adapted to use with her claws. 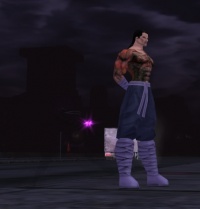 After her fall from heroism, Arachnos trained Blackslash extensively in the art of infiltration and assassination. She was capable of bypassing 99% of the world's technological means of detection, and even some superhuman and alien means.

The first was designed and given to her by Black Scorpion's mechanics at Arachnos, and is very robotic looking. This suit was likely retrieved by him after her death.

The second suit was thinner and flexible, which she claimed was designed by her godfather, the Weevil, in the future. This is supported by the fact that, after her psychotic break, the Weevil was able to remotely disable the suit before she was able to cause any dramatic damage in Paragon City. She apparently found a way to repair this suit on her own, as she began wearing it again about a year after her flight to the Rogue Isles. This suit was buried with her, at her funeral. 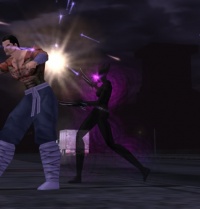 Her razor-sharp claws were made of an incredibly durable type of dual-phase steel, the exact composition of which is unknown to anyone but Black Scorpion's mechanics and possibly the Weevil.

Her claws in Black Scorpion's version of the suit were external to the suit itself. She was capable of concealing these and carrying them with her at all times.

Blackslash possessed a belt capable of negating her own gravity and providing a modest airspeed. She wore this even in plainclothes.

She was prone to wild speculation and bizarre theories, and was easily thrown off track or manipulated by mundane information. Almost all of her theories related to Nemesis, and his plans for world domination.

Supposedly tortured and experimented upon by Nemesis in her youth, Blackslash's face and body were covered with scars, and her scalp was damaged to the point that she could no longer grow hair upon her head.

Blackslash was virtually incapable of passing as a normal human being in social settings. She spoke rarely, and when she did, it was often in one or two word responses. She seemed to avoid referring to herself in any manner (avoiding "I" or "me"), as if she was beneath reference.

Blackslash claimed to have been born in an alternate timeline on October 31st, 2005 to Night-Girl and another unidentified hero.

This history is outlined in more detail in her journal, and by the timeline of her alternate future, commonly referred to as Nemesis Reigns. (these will be added/extended later)

Blackslash died on November 26th, 2007. The Liberty League held a funeral for her the next day.