RIP. As with all my toons, Betty was retired when I quit near the beginning of September. Anyone who wishes to use this name and space, please feel free.

Betty is your typical country girl. Polite, sweet, innocent... and more than used to being around high tech machinery, gene splicing, and cloning. While her father may have been a super scientist, she herself only understands the basics of most scientific or technological devices, generally prefering to have worked with the animals, rather than the equipment.

She is a bit naive to some ways of the world, and while never having attended public schooling, is certainly not a "country bumpkin". Many aspects of the hero and villain world, namely other's origins, confuse her. She simply can not understand why a dark /elf/ is so angry when she should be cobbling shoes merrily, like in the books, for example!

While being very open to most people, she is also quite shy, prefering not to be gathered in a big group. She feels far more comfortable around others like her, nowadays. Animal like humans, or things that do not look human at all! Still, even around these types, she grows a bit frusterated that she is constantly the subject of everyone's attention. As if a cow-girl is so much more bizzare than a fairy princess cyborg with an exposed brain! It should also be noted that those who come up to her and immediatly begin poking, proding, and touching her, thinking she enjoys it simply because she is a cow-girl, will see she can quickly become aggitated and cold.

Betty posesses enhanced strength and durabilty. She has been known to tear large chunks of concrete out of the ground and hurl them with ease, when it is needed, as well as be on the recieving end of a 15 foot beast's punch and only grow angry. As the newfound leader of many a temporary herd, she has grown far more confident in her posistion, able to inspire her herd to great things, increasing their own durability and strength, as well.

The powerful looking woman is a rather odd sight, she will admit, despite her annoyance of the attention it causes her. Even though, she is quite proud of herself, and has no qualms about her new look. Head to toe, she is covered in a smooth layer of fur, large bull horns sticking from the sides of her head, and upon her rump rests a long swaying tail. While almost completely nude, her fur covers all of her naughty bits, ensuring there won't be any looky loo's. The only semblence of clothing she wears now, are a pair of heavy leather buckled gloves, tall leather, buckled boots(Which house many pockets filled with items such as cell phones, electronic tablets, and the like.), and a red leather collar, of which, upon being asked, she makes certain it is known that it does not signify any ownership, and she simply wears it because she likes it. Beneath her boots, she now owns a pair of strong hooves, which she prefers to keep hidden in the footwear.

The serum has effected her in much more private ways, as well, from fusing with her DNA. Her breasts fill with milk multiple times a day, and must be tended to. The act of her milking, though, causes her a great deal of pleasure, and coincidentally, is the only way she can begin to grow arroused any more, which she does quite quickly once it begins. Because of this, she tends to deal with the act on her own in private, though she has been known to trust a few others, as well, none of them normal humans. The serum's intent to increase the cows' breeding seems to have had an adverse reaction to her, though, leaving her utterly barren. She has recently learned to alter the effects as well, granting her the ability to produce chocolate milk direct from the source, despite how many find this rather silly.

While the serum has left her barren, the breeding aspect of it "has" left her with another slight querk. Bisexual, Betty was, even before the accident, quite "smitten" with animals, as well as her sister, and anyone else she may have fancied. After being transformed, though, while she no longer grows arroused untill she is milked, her love for animals, and everything else, has grown, unable to refuse whatever it may be that she has let milk her. 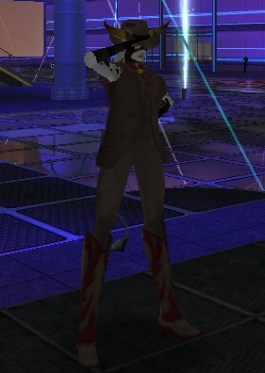 Betty had grown up on a large farm in a rural area, with her sister of one year younger, and her father. Now, mind you, this wasn't those farms you see in those silly oil paintings or some such nonsense. No no, this was a 'real' farm. With large, high tech machinery laying about, barns filled with technical whosit-whatsits. Now this was because her father, the owner of the farm, was a scientific genius. You know! Like those brilliant mad scientist farmers like in the comics! Yup, that was her pappy!

Young Betty grew up around the multitude of animals. Cows, horses, pigs, chickens, ducks, sheep, with a moo moo here and a moo-sorry. She became adept at tending to them and mostly running the non-mechanized aspects of the farm. Her sister helped her as well, though still she was always thought of as the hard worker. Behind closed doors, the two also tended to the animals in much more "private" ways, as well as each other.

Upon her 17th birthday she noticed her father had been starting to act rather odd, as of late. A few weeks later, late at night, she decided to check on him while he was out in one of the tech-barns, wanting to make sure he was ok. The door was locked, much to her surprise, and the sound of silence, save for soft bubbling, that met her knocking began to worry her. Retrieving a ladder, she rushed back and set it against the window on the second story. Upon reaching the top, she was met with an unpleasant fall. Rather than the normal walkway that had been inside, she plummeted right down in to a large vat of white liquid.

By the end of the month, the liquid, which turned out to be her father's newest serum to increase their cows' milk production, breeding, and health, had effected her quite obviously. She had grown extremely strong, as well as a bit faster, not to mention the fact that she was now something that resembled a furry fan's wet dream. Coincidentally, during that same month, her sister had met with an equally unfortunate accident. It seemed that somehow, their new miracle pills for their sheep and goats had somehow slipped their way in to her sister's breakfast, and quickly she resembled Betty, all but with a different animalistic look. 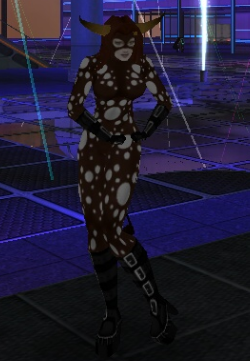 How now.
As the month ended, the scientific community had heard of the accidents, and their father had been quickly arrested and their farm reposessed. Much to the sisters' horror, they themselves were about to be "reposessed", though they managed to escape, fighting off the armed guards. After a few days, they had made their way to Paragon, where after much disagreement, they parted ways. Carry, who believed that there had been something sinister going on, and that their "accidents" had been anything but, had stayed in Paragon, attempting to help those with her new powers, despite being bitter and certainly not very cheerful. Betty, the sweet and innocent one, had gone to the Rogue Isles, hoping to find a way, or get enough money, to free their father, in any way she could. Confused and mislead, the tragic "villain" now leads a life of crime, possibly never to be redeemed.
Retrieved from "https://virtueverse.net/wiki/Bovinia"
Categories: Character | Female | Science | Brute | Villain | Fallen Hero | Anthropomorphic | Bisexual | Public Identity | Teenager | Outlaw