Cailie Marie Edwards, born to Henry and Marie Edwards, both Longbow agents. At the age of 16, she left her home in Paragon City for the Rogue Isles, lured by the freedom awaiting her. She made a living robbing Arachnos blind of anything she could possibly use in her research, or sell for money. With the help of an abandoned factory that she converted into a passable lab, she spends most of her time researching and fabricating new technologies, which she has no intention of selling or putting into the general public's hands. She will work on projects to help friends, however.

The Williams School for Girls

From the Desk Of Headmistress Williams

Mr. and Mrs. Edwards, It has come to our attention that your daughter, Cailie, is somewhat of a "problem child." As you know, here at the Williams School for Girls, we have educated Paragon City's finest debutantes for 75 years. In the mandatory screening interview, Ms. Edwards presented as a quiet, respectful young girl. We are now, however, CERTAIN that either Ms. Edwards was heavily sedated, or that you have sent us her un-house-trained twin by mistake. Ms. Edwards sees herself as above the rules of the Academy, flagrantly violating our curfew, as well as our dress code. We are certain that Ms. Edwards MUST own skirts, as you were required to purchase them (Knee-length, school crest embroidered) for her, however, she is only seen gallivanting around in shorts as a BOY would. Ms. Edwards refuses to socialize with the other girls, preferring to lock herself in her dormitory, and "tinker" as she calls it. While it is admirable that you daughter is so taken with academic pursuits, this may be a time to gently remind her that the fairer sex should not be engaged in such manual tasks. Her fingernails are often dirty, and her cheeks smudged during inspection. I am sure that she has told you, though, about the countless demerits she has received for this. As a side note, we have confiscated Mr. Edwards' soldering iron from the young Ms. Cailie due to the cafeteria incident, and he may pick it up at my office at his earliest convenience.

As you know, we have a "three strike" rule here at the Williams School for Girls, and I might stress that it is only due to my close personal relationship with Mrs. Edwards that your daughter has been allowed to stay thus far. Rather than allowing her to be expelled from such a prestigious school (such a black mark has NEVER besmirched someone's record), we would highly advise removing her from our care and perhaps placing her in a public school. Please send correspondence within three (3) business days, or, better yet, surprise us all and spirit her away from here.

As a side note, the annual Williams School for Girls fundraiser etiquette ball will be held October 20th. Please mark your calendars.

From the Diary of Cailie Edwards

Expelled from another school today. I swear the chemistry lab fire wasn't my fault! I don't even know anything about, chemistry! So I may have those stolen materials from shop class, and melted down some of the plates in the weight room for raw materials, but it's not like anybody uses them anyway! I bet Mr. King just wanted me out of his class. He never did like me. Dad's going to be pissed...this is like the third school in two years.

I'm learning from the accidents though, you know? Slowly but surely. Project 22 got finished the other day. My first real live robot! Sure, he's a little lacking in the personality department, and I haven't quite gotten all the bugs out, but he's my FIRST!!!

Project 22 is dead. Long live Project 22. Mom found out that I was powering him using a small fission reactor, and flipped out on me. Between that and the school thing, I'm grounded for a while. What I really need is a lab. And freedom. Someplace that I can get the materials I need without being hassled. Boy, I bet I could really get some work done then, with no one to bother me, or tell me to go to sleep, and no time wasted studying things I learned YEARS ago.

Lt. Marie Edwards: No thank you, sir. May I ask why I've been brought here?

[REDACTED]: I'll be frank with you, Lieutenant. Command is worried about your daughter.

Lt. Marie Edwards: My daughter, sir? With all due respect, what does she-?

[REDACTED]: Command is aware of your daughter's...defection, shall we say, to the Rogue Isles.

Lt. Marie Edwards: Defection is hardly the word I would use to describe it.

[REDACTED]: How you would describe it is irrelevant, Lieutenant Edwards. What command needs to know is if they should be worried. [REDACTED] is in the other room interrogating your husband, Captain Henry Edwards on the same matters.

Lt. Marie Edwards: And if she's a threat?

[REDACTED]: We will have to take care of that threat. You and your husband will be put before a tribunal to determine if you're fit for duty.

Lt. Marie Edwards: I assure you, my daughter running away to the Rogue Isles has no impact on my capabilities as a Lieutenant, sir.

[REDACTED]: Answer the question, Lieutenant. Is she a threat?

Arachnos Inventory Report for Shipment 23801 from Port Oakes to Grandville

Bartender: What'll it be, Frank?

Man (rubbing his head): What gets you drunk the quickest, Mac?

Bartender: So what's the occaision? Woman leave you?

Man: I fucked up, Mac. Da family's gonna KILL me for this.

Man (continues, unabated): It was a GIRL, Mac. A LITTLE GIRL.

Man: I don't know, Mac...she just, she fuckin' came CRASHING down in the compound in one a those arachnos flyin' things, and she just...her and her robots, they just hopped in the car, blew through the fuckin' gate, without a word!

Bartender: The Family, they didn't kill her for that?

Man: Naw, Mac, they chased her, yeah, but apparently she drove da fuckin' limo off a cliff! Da boys came back empty handed.

Bartender (pours four more shots, on the house for the man.)

(A crash at the door, angry man in a suit enters, grabs Frank by the collar, drags him out, still drinking a shot.) 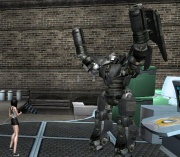 Cailie dancing with the largest of her robots, Fido.
Cailie's robots were one of her first projects upon arriving in the isles. Free from the restrictions of living at home, and with the newfound ability to simply take whatever she needed, she set upon building a small army of fearsome death-bots. While Cailie prefers rather to acquire what she needs stealthily when she breaks in, her loyal robots provide a certain measure of style when the shit hits the fan. She hardly sees them as simple tools to achieve an end, however. For her first several years in the Isles, her robots were the only form of contact she had, and she sees them all as family. Despite her apparent callousness, Cailie can often be found after a fight tenderly wiping her robots down, humming a tune. The robots, in turn, take after her, and express a love of dancing with their creator, and of pizza--despite the lack of a digestive system.

Sam is one of Cailie's closest friends. They met as she was tending bar in Pocket D, telling stories to the disinterested patrons who simply wanted to drink their whiskey in peace. She took it upon herself to play matchmaker between him and Luna I'theri, insisting that Sam ask her out, giving him date ideas, and even supplying him with flowers. Sam, in exchange, has introduced Cailie to almost all of those that she calls friends. While she doesn't know the full extent of Sam's life story, she trusts him with her life, and will gladly fight alongside him.

By a rather strange turn of events, this 72 year old zombie (20 at the time she died), has become Cailie's roommate. The sarcastic wit shared by the pair lead to Cailie's research (and eventual implementation) of an artificial heart for Jenny, designed to prevent her from decaying overly much. Cailie sees Jenny as a mother figure for the advice she can impart, but also as a friend to go out drinking with--never mind the fact that whiskey spills out of Jenny as fast as she can pour it in.

Cailie's fiancee, the pair met when Cailie was engaged in one of her many researching sprees in the middle of Pocket D. Ferra can be a shy, and quiet girl, but her personality meshes well with Cailie's boisterous tomboyishness. Their first "date" took place clearing out a Council base, and Cailie has looked up to her lover's heroics ever since, even inspiring her to don her leathers and act as a vigilante by night.

((This section free for edits!))

-From the desk of Samuel Cooper-

Hmmm, what to say about Cailie... She's clumsy and often acts before thinking. In fact, it's a wonder she even survives on her own sometimes. She's also a tad bit shy, and it's a chore introducing her to new people. However, she's also determined, intelligent, and sharp-witted. She always knows how to improve any given situation and has a morality that I have come to deeply respect. It's been a pleasure knowing her, and I hope this friendship lasts for quite some time.

-The following was overheard from Av Zaldun-

Cailie? She's a good kid. She's got some weird friends, but heh, she lets a greedy old bastard like me hang around, so who am I to judge? But she's got regrets. I tell her there's no point to that, you know? What's done is done. Don't think she listens much, but eh, what business is it of mine? She made a sexy set of new arms for me, so I got nothing to complain about! 'Cept maybe that she hasn't shown me any, heh, pictures of herself.