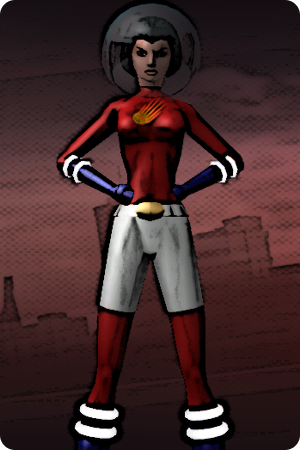 A Captain in the Force d'Action Astronautique (FAA) stationed on the exploratory generation ship Esnault-Pelterie, Madeleine Comète and the rest of her regiment was tasked with protecting the science teams on board during their 100+ year journey.

The ship was pulled off-course due to some miscalculations regarding a small black hole, and while overseeing rocket augmentation on the hull to correct course, she was accidentally blown clear of the ship.

She remembers spinning end-over-end, losing sight of the ship, and then darkness. When she awoke, she was somehow back on earth -- either in the past or in an alternate timeline, she couldn't be sure.

She's chosen to stay in the US to avoid possibly meeting her ancestors in Chamonix and Albertville, France.

There is mounting evidence that Madeleine is now in an alternate universe instead of "merely" being lost in time.

In her universe, Madeleine is the great-granddaughter of the famous Admiral Jean-Jacques Comète who founded the FAA; she proudly wears her namesake emblem on her FAA uniform.

Like most new FAA recruits, she joined the FAA in CCXXII at age 12 and she worked her way up to the rank of Capitaine by the time she was 15 (which is a fast, but not unheard of progression through the ranks of the FAA).

One of the first people she met in Paragon City was the reclusive founder of the Victoria Landsfeld Foundation, Jenny Herder. Jenny helped Madeleine find some lodging and directed her to seek out the Guardians of Tomorrow. As Madeline said: "Having a support group would be a sensible thing for me to seek out". She knows, or at least suspects, that Jenny is an android.

There are similarities between Madeleine's universe of origin and the one she is inhabiting now, for example, the French and English languages seem to have evolved along a similar path.

There are also several differences and discrepancies:

In Madeleine's universe, Kheldians revealed themselves to humans on 4 Nivôse of the Year CLXIV (approximately December 25th, 1955) when the Earth was on the brink of nuclear Armageddon. They ushered peace and solved most of the world's problems (overpopulation, starvation, crime, etc.) and are revered as 'The High Ones'.

"They saved us from ourselves, and gave us the stars"

Kheldians interacts with humans, but only with those deemed "worthy"

Nictus are unknown in Madeleine's universe. The very concept of a Corrupted Kheldian was met with revulsion.

Madeleine has a cheerful personality; she is respectful of people in a position of leadership, and she is used to following orders.

Madeleine deeply ingrained respect for authority and hierarchy extends to the Guardians she has met. She will address each one as "sir" or "ma'am" and will obey their directives without hesitation. She would never say anything disparaging about him or any other Guardians and feels extremely bad if something she says can be seen as disapproval or criticism.

Even if in her universe law enforcement officers have warships, Madeleine adheres to the Force d'Action Astronautique's strict 'no lethality' policy. Her first encounter with Longbow's heavy-handed methods left her with a bad impression; she compared them to a group or faction from her universe known to her as "la 4ieme Légion" (the 4th Legion) as being 'by any means necessary' and a bit "mental"

Despite the difference in upbringing with her fellow Guardians, she does not feel like she has been abused, or restricted, but she has the gnawing feeling that's what the rest of the Guardians sees her as.

She secretly worries that the FAA doesn't have the intention (or the ability) to effect a rescue.

Madeleine's education and training were purely practical, with no consideration for recreational activities. When asked what she did for "R&R" ("rest and recuperation"), she answered meditation, study, use of the stimu-baths (a combination hot tub/massage table specific to her universe), and sleep.

"Sleep is a necessity. Only take what you need, lest it takes you from your duties"...."

This left no place for art and self-expression: she mentioned an "Artist Caste" who were specifically assigned those activities. She also mentioned she had not been "trained for discourse and arguments".

"Fascism" is an unknown concept for her, as is "monastic" or "King Arthur". All the "stories" Madeleine was told were in the form of cautionary tales.

Her native tongue is French, and she speaks English fluently, which would indicate that those languages are the same (or at least very similar) in both universes.

Madeleine describes herself as a "level 2 techno-telekinesist": she says implants in her brain boost her natural meta-abilities. She also says it is a standard procedure in the Force d'Action Astronautique. Those implants allow her to create several local gravity effects, both for offensive and defensive purposes, and she can speed up or slow down a person's metabolism.

Madeleine's enviro-suit or "skinsuit" offers some protection against projectile weapons. Its fabric can also be reconfigured at will for other uses: for example, she was able to make it into a one-piece swimsuit.

With her helmet on, the suit allows her to survive in most environments, including a hard vacuum. Her helmet enhances her senses beyond what she would normally perceive and it incorporates an odour filter (useful in Paragon City's sewers)