Set in the style of a Wild West gang, the Dead Eye Gang is not your typical villain group. Dedicated to the idea that every member should profit from the gang's criminal enterprises, and have a little fun while doing so, this group means to stand apart as a select team of thugs, thieves, mercenaries, and of course, outlaws. Further information and a chance to apply for membership outside of the game can be found at the Gang's official forum website here. 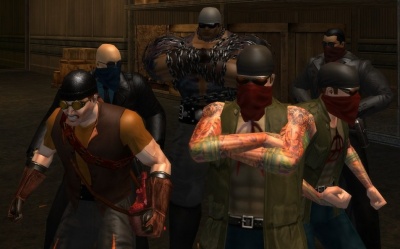 Having planned to do so for years, the notorious bandit expanded the ranks of the gang by making membership open to the public. Jake sought those individuals best suited to the life of an outlaw, such as thugs, thieves, mercenaries, street punks, or anyone else meeting his approval. However, many months after recruiting his first band of misfits, gang membership and activity decreased, prompting Jake to issue a temporary hiatus and close shop for a while. Presently, the model for the new and improved gang is in the works.

Authority has always been delegated pretty simply in the Gang, the main rule being this: Do whatever Jake tells you. However, as per the style of the traditional group, the gunman has decided on adding a few titles and rewards to help encourage membership.

Jake is the boss. Anyone who has a hard time dealing with that will not last too long in the Gang, or anywhere else for that matter.

An honorific title for any outlaw whose exploits, abilities, or talents surpass all others, approaching even the level of magnificence personified in Dead Eye Jake. The rank is also reserved for members who exhibit long-standing loyalty to the gang. Few, if any, outlaws will ever be recognized as being legendary in their own time.

A step above your common outlaw, this title indicates those who are not just great at stealing and brawling, but are also excellent fighters and capable of leading others. These are the specialists Jake can count on to get the job done. Any Gunslinger in the Dead Eye Gang should be able to prove why they deserve such a name at any time.

The backbone of the group, this rank signifies the bare minimum of what every member should achieve. The life of an outlaw is doing whatever the hell you want, though Jake constantly requires three things from his men: follow orders, bring in the money, and earn a name for yourself.

New members admitted into the Gang who have not yet proved their worth are called Greenhorns for their lack of experience. Their primary goal in the Gang is, aside from following orders, to do whatever it takes to make it as a real outlaw.

Currently the Gang meets and stores supplies at their secret hideout somewhere in St. Martial.

There is no formal process for getting in the Gang. People who want to become members should try to contact a member to gain Jake's approval. A telephone or communicator (in-game messaging), the postal service (in-game e-mail), or direct delivery of an application (filling out an application on the forum) are all viable ways of corresponding with Jake and the Gang.

Due to the nature of the group and its aversion to authority, the Gang rarely allies itself with competing organizations. However, coalitions are possible if the terms are favorable.

The Last Bastion: When asked why a band of ruthless outlaws would want to align themselves with this Rogue Isle safe house, members of the gang might say "Its for the kids."

The following 7 pages are in this category, out of 7 total.