'Hope begins in the dark, the stubborn hope that if you just show up and try to do the right thing, the dawn will come. You wait and watch and work: You don't give up.'
Anne Lamott

The Last Bastion is a safe house run by retired or exiled heroes. They intend to create at least a small haven for the oppressed and those seeking to turn a new leaf in the Isles. 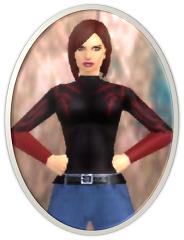 The Last Bastion is a relaxed group that encourages role play. The themed of the group is that of good people struggling to find a place in the Rogue Isles and help others as much as possible. Many characters either have lived in the Isles their whole lives or ended up there as a last resort after other places didn't work out, particularly Paragon City. We have a focus on protecting the peoples of the Isles from Arachnos and other villain groups. At this time we are actively recruiting. If you think you have a character or a concept that would work well with us and are interested, please contact any of our members.

When Delinquent Behavior left her previous team she started taking in friends that had left as well. At first the idea was to take in the lost children of the Isles and give them a place of safety and to educate them, to give those lost children a sense of safety, belonging and worth and maybe stop them from becoming the next generation of villains to populate the Rogue Isles. It wasn't long before they realized how much more they could do.

While still a place of sanctuary for those that need it, The Last Bastion has become more. The members of the group have started not only helping the children of the Isles and those that come looking for it but also those they hear about in trouble. Since the Isles seems to have no end of people in need there will always be work for them to do. With that in mind everyone is keeping an eye out for those that might need help or might be willing to help.

Many members of the Last Bastion have reasons to visit Paragon City. These offices were opened to help facilitate that and to keep the public business of the orphanage and school going. It's a smaller operation but one that is vital to the well being of the bigger job in the Rogue Isles.

Few can look into the the future and know what is coming. The members of the Last Bastion plan on doing all they can to improve the lives of the people of the Isles. None of them believe this is a quick or easy task but plan on trying to do it anyway.