Schwarze Dämmerung is a villain group dedicated to bringing about what is essentially the end of the world. Founded by Grandfather Bones after he discovered an ancient temple hidden deep beneath the earth, the villain group consists of a motley of very different types of villains, all working to sow chaos, mayhem, and corruption throughout the Rogue Isles and Paragon City. By corrupting good and sowing chaos, they seek to create a fanatic devotion in heroes to purging evil, so overwhelming that heroes will use their powers to destroy the world themselves, thus ripping a hole in reality that will pull the End of All Things into our reality and end the universe as we know it.

There are countless villains out there, demons from the depths of Hell, demon-worshipers, the death-obsessed, who believe that by destroying the world they will accomplish great things in the name of nameless Evil. What is Evil? Evil is the opposite of Good, a juxtaposition, the way that the Light wants the universe to be. If Evil destroys the world, we accomplish nothing. Evil has destroyed the universe countless times before: every time before. At the end of all universes, it is death and destruction which overtake the universe, and then it is recreated, a universe no different than the last.

We seek change. A new order, one ruled over by Darkness, with Light subsumed but not wholly gone. The Darkness, we must always remember, loves the Light, but the Light burns the Darkness and expels it. But Light and Darkness are not opposites, else they could not exist together. It is a fact that wherever there is Light, there is Shadow... there is Darkness. Light and Darkness coexist even now! They are not opposites. They do not juxtapose. Darkness does not conform to the foolish will of Light to make ideas opposed to one another.

No, to bring the End of All Things, it is not Evil which must destroy the world, but Good. Good must carry the hammer that tears this universe apart. Only then will the rule of contradiction be torn, and will Darkness enter the universe through the rip in reality. We must corrupt Good by doing Evil, but we must not seek the destruction of all things. Our endgame is far greater than those of the simple-minded "evildoers" of the world. The most powerful villains on this planet have never sought its destruction. Lord Recluse himself does not seek destruction. He seeks power, above all else. We ought to take him as our example. A wise villain is a thoughtful one, a patient one. We must see further than the demons which enter this world. We must seek beyond the insipid notion that destroying the world, that worshiping a foolish concept such as Evil, will do anything at all but further the aims of the Light.

The irony here is that to worship Evil is to do Good. We must do Evil that corrupts Good, driving Good to do Evil unto us in turn. Only then will we be close to accomplishing our goals, and that of the End of All Things: Darkness everlasting. 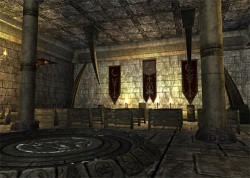 Let me introduce you to the End.

After founding the cult, Bones quickly started recruiting members. At first, many of them were insane, victims of their own powers and the Rogue Isles. As word of the Schwarze beliefs got out, others came to him. The temple itself has occasionally made recruitments, pulling people from they were doing into it's halls.

Schwarze Dammerung, meaning Black Dawn in German, is a Villain Group based on the Virtue server. We focus on the darker sides of villainy and fall into the MRP (Mature Roleplay) category.

The end goal is to bring about The End of All Things. The End, otherwise called The Darkness, isn't actually the end of the world, but the name they've given to their god, an entity that they claim has watched the creation and collapse of every universe that has ever existed. They believe the End will manifest as a change in the current order. When the change occurs, the world be bathed in darkness and the light will be consumed. Everything--every person, every object, every animal, every idea--everything will converge and become one.

They will bring The Dark to the world by bringing out the evil in humanity and stifling the good. Each villainous act is carefully constructed for this purpose. They are keenly away of the weaknesses in their foes and ready to pounce, bringing every person they meet a step closer to the Dark or snuffing them out entirely. They find it infinitely more satisfying to corrupt a hero than to kill them.

Power is important. They will do what they have to gain favor or prove their strength to those around them. Being seen as the alpha is not as important as having people quietly respect you. They realize that violence and brawn are not always the best weapons.

It's important to note that we are playing villains. We know that our characters are wrong, they're moral compass is skewed and they've gone down a path that few would follow. Furthermore, we know we can never win. We're sure NCSoft doesn't intend to change their world to suit our endgame, so there absolutely must be something our character's have missed. The Darkness is not all powerful, nor are any of it's followers.