So come along, everyone's invited

Fuck the bullshit whether from the hill or from the pulpit

Today, I put my money on the fall of every culprit

The truth prevails when all else fails

Drug dealers make the music, then guess who's back?

Your souls answer to greenbacks, hoes and crack... 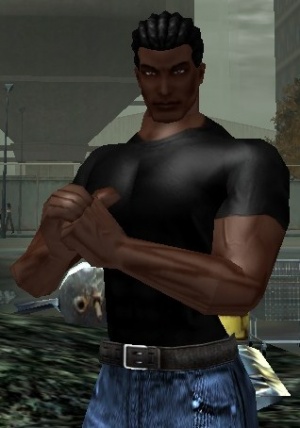 Dom's one power is the ability to take on the properties of solid, dense matter. With but a touch and a thought, he can become a literal man of steel, brick, stone, and even Impervium. Many a thug has looked on in disbelief as Dominic kneels in front of them, only to rise as a concrete warrior.

There are limitations to his power, some inexplicable. First and foremost, Dom can only use dense solids as a foundation. No wood, water, air, or plastic. In addition, he must have a plentiful amount of the material to transform completely. A handful of marble, for instance, would only allow Dominic's hands to become marble. Useful, to be sure, but limited in its application.

The most obvious benefit to Dom's power is that it lends him varying levels of invulnerability. In a second, Dom becomes impervious to harm from knives and bullets. Depending on the material, he can even resist explosives and energy weapons.

Not only does a metamorphosis lend him a degree of superhuman toughness, but Dom's other forms are entirely devoid of feeling. He feels neither pain nor pleasure in another form.

It seems natural that a man made of iron should command a superhuman level of strength, and it's true. Dominic's already imposing physique is augmented beyond the ken of his peers, allowing him to toss dumpsters aside, and break down doors with ease. (See Marvel System Strength Scale)

One interesting effect the metamorphoses have on Dom is a superhuman level of stamina. When in a different form, Dominic does not grow physically tired. His mental state, curiously enough, is still influenced by stress. In this sense, Dom does grow weary during extended conflicts.

The extent of effects that transfer between forms is unknown. Injuries sustained in normal form seem to be nullified while in another form. A broken arm, for example, won't matter after a transformation, but will remain broken.

The fringe benefits of being a metamorph depend on what material Dominic transforms into. Iron is magnetic, copper conducts electricity very well, and Impervium is the most durable substance known to man. All of these can either help or hinder Dominic, depending on the situation.

Growing up in Kings Row tends to toughen a child, and Dom was no exception. Knowing how to fight, fair or otherwise, makes Dom an even more terrifying prospect for the criminal elements of Paragon to take on.

I have a playlist that I think encapsulates Changehide's character, his history, and his exploits. It's structured to flow kind of like a movie soundtrack, if that makes any sense.

Check out the playlist here.