"Do you understand your orders?" the Arachnos solider asked Red.

The soldier was trying to sound emotionless and authoritative with his question. It was a trick all the grunts in Arachnos tried to mimic as they were constantly trying to sound the same.

He hated them all, but especially the brutish squads that patrolled the streets. They were all such copycats, such festering, fascist wanna-be’s. They lived to climb a social hierarchy, and sacrificed any concept of individuality along the way. It was the antithesis of how Chaos Red preferred to live.

File:Chaosred4.jpg
Red is recaptured by Arachnos

Chaos Red stared at his orders. It was a communiqué, written on a laptop somewhere, it was unsigned and had no letter head, but it had all the markings of an Arachnos order. It read very simply and without any wasted words:

Chaos Red, you will surrender your technological advances to this soldier in front of you immediately.

"Ah come on guy! You didn’t even say please!" Chaos Red scoffed, throwing the letter away.

"Do you understand your orders?" the Arachnos solder asked Red again.

Chaos Red shrugged and then squinted his eyes as narrowly as possible to show his disdain.

"Sir, I will ask you to comply with this executive order, or face retribution," the soldier threatened. The Wolf Spider then lifted a black energy mace over his head to illustrate his sincerity in carrying out that threat.

Red weighed the consequences. All he had to do was provide a small vial of his latest invention, an inky substance that could conduct the electrical energy from the surrounding atmosphere. Red was a genius with electricity and had a smattering of biochemistry as well. He was getting better at his discovery, and had managed to simulate having "super powers" by tattooing himself with his specialized ink.

He exploited his new found powers immediately and he had been running rampant all over Mercy Island, robbing businesses, mugging gangs and thugs for cash. Arachnos probably had enough of his shenanigans and his crime spree. They wanted him to hand his prized possession over. They’d probably sell the ink on the black market, or inject the stuff into diseased lackeys to learn how it worked.

Red grinned, arched his shoulder back and raised his chin in defiance. "I’ll be God-damned before I hand anything over to Lord Recluse and your freakish fascist clown show!" He let his saliva fly loose inside his mouth as he said this, and a small misty spray wetted the helmet of the Arachnos solider in front of him.

The soldier wiped the spit on his face slowly with a handkerchief. Then he stared deeply into Chaos Red’s eyes and let loose a wicked smile, "Good, we were hoping you’d say that."

The soldier then brought his energy mace down in a sharp, swift stroke. The soldier was fast and well-trained with his weapon, but Chaos Red was faster and arched his back to avoid the blow.

Red then activated the solar array packed inside his black leather jacket. The ink in his tattoos crackled in response to the surge of power. His crimson Mohawk hair bristled at the activation of the electricity inside his body. Crimson colored arcs of electricity now began to dance all over his Red’s body.

Chaos Red grinned in anticipation of the one to one fight. He was ready for the bastard, and he delighted at the opportunity to show an Arachnos solider what he was capable of in a fight.

Alas, the Arachnos rarely fight one on one. Like all fascists, the gang mentality prevails. As Red arched his back and activated his electrical powers, he was met with a small platoon of Arachnos soliders, who suddenly emerged from an alleyway directly behind him.

Each of them raised energy maces of their own, and pummeled him with swift, accurate strokes. It was not long before Chaos Red’s bones were broken and his blood began to spill onto the sidewalk and drip slowly into the gutter.

"Fish ‘em out of his own blood and urine," barked the soldier after it was over. "Take off that solar array jacket of his, and stuff him into a duffel bag. We’ll carry our prize back to our lieutenant like a sack of potatoes. We earned our pay tonight boys - the first round is on me."

The Arachnos soldiers cheered, the power of their regime had triumphed once again.

Prison is hell and an Arachnos prison cell is a special kind of hell, one usually reserved for upstart punks like Chaos Red.

Red was lying on a bed made of cold stainless steel, staring at a ceiling made of cold stainless steel. Bright lights flickered down from above, awful neon beams that seemed to illuminate every nook and cranny of his skin. It was so bright and so erratic with its constant flickering, it made his eyes burn to keep them open for any length of time. When he did close his eyes, shadows and ghostly silhouettes of the lights continued to flicker in his head.

Red smelled terrible, he was lying in his own urine and blood after he was beaten down by Arachnos thug and brought to prison. Since then, he has not been able to shower. He has a sink in his cell but it emits a water stream weaker than a bat can piss, and the water smells just as bad. His jacket has been removed, so he lacks the solar arrays required to activate his super powers.

To make matters worse sweat has begun to merge with his hair gel, and his Mohawk haircut has begun to sag. This is the worst indignity of all, because Red insists on having perfect hair for all occasions, even when the occasion is lying in a prison cell waiting to die.

Red stretched out his long muscular arms and took a whiff of his arm pits.

"Whew! Manly scent," he said trying to make himself laugh. "A little too much manly scent, oh Christ I’ve been in isolation for three lousy hours and I’m already talking to myself."

Then out of nowhere strange noises began to emit down the hall of his cell. 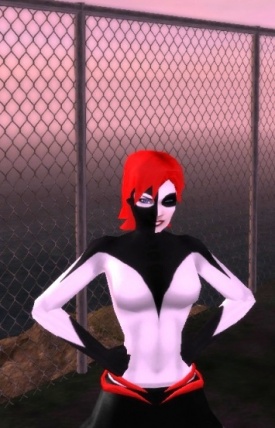 Loca was schizophreniz, psychotic, extremely homicidal and dangerous. Chaos Red adored her.
Loca was crazy. In fact, "crazy" isn’t even a strong enough word for it. The woman had two souls inside of her that hated each other and were feuding over an ancient war that started 500 years ago. She was utterly psychotic, schizophrenic, violent, homicidal, dangerous and a complete utter train wreck socially and sexually.

Loca’s extreme split-personality had also manifested super-powers of her own. She could attack opponents with her mind, she was literally able to crush their psyches through sheer will, or sometimes hypnotize them, or coerce them into unspeakable acts of horror for her own amusement.

Yeah she was one dangerous chick, and sometimes Red was unsure whether his strong feelings for her were genuine, or were just planted there by Loca for convenience. The fact of the matter was, Red didn’t care: the girl was hot.

She wore two-tone spandex, and a black leather mini skirt, and her hair was the color of tangerines and shined like silk. While her body did not possess an abundance of curves, it was taut, athletic, lean and flexible . Her eyelashes were thick and long and curled over eyes. Eyes, that could pierce any man’s heart in an instant. Her voice had a vague latin accent to it, and she could purr like a kitten when she decided to soften her words, and bat those lush eyelashes of hers.

She could be adorable, warm and loving in one instant, and then cruel, abusive and domineering the next. Her personality was a raging storm, with all the thunder, lightning and rain bursting out of her with each breath. It was like dating a tornado, and the sex was rather similar too.

Loca had apparently come to rescue Red, and from the sounds of it, was kicking ass in the process.

It was not long before Loca was standing in front of Red lying in his cell, smelling his armpits.

"You have some very peculiar habits, do you know that?" Loca mocked.

Red sighed, "Get me out here girl, I need to fix my hair."

"Shut up!" Loca snapped. "You’ll wait for me and you’ll like waiting for me." Then there was a pause, and then Loca added: "Don’t say that! I love that hair of his. Give me a break it’s the stupidest hair ever! Shut up! No, *you* shut up! You’re acting like a fool! We need him, so shut up and let me break him out. You idiot you haven’t even given him his jacket back! I am not an idiot, you’re the idiot."

This was the kind of typical and confusing dialog Loca spewed all the time. In fact, the verbal feud within Loca lasted several minutes until finally Red interfered: "Shut up both of you! And give me my jacket!"

With Red’s jacket back on, the electrical surge in Chaos Red’s tattoo ink was activated, and his hair bristled straight again as red arcs of lightning dancer around his shoulders and chest. It was not long before Red destroyed his cell, and escaped the prison with Loca’s help.

He was free, but he was also now a fugitive of Arachnos. Red knew just how severe a situation that was. Arachnos would search for him again, and the next time, his fate might be worse than just a cold prison cell...