Chase Valentine is the quintessential dashing rogue, a sauve and debonair hero who wins the hearts of ladies by the dozen. A larger-than-life swashbuckler who seems to have come straight from the pages of a Dumas pulp adventure - or possibly a rather tongue-in-cheek romance novel.

Either way, Chase is clearly a personality from another place and time... and another gender. She seems to be completely unaware of all this, though - she plays her role to the hilt, and seems to thoroughly enjoy every last moment. Occasionally, in moments of true duress, one might see the brief flicker of a more serious personality beneath Chase's jovial exterior. Such glimpses are usually over in a heartbeat, however, and by Chase are just as swiftly forgotten.

Chase Valentine is a Broadsword/Willpower Scrapper played by @Fox Lee. She's essentially a human Expy of a character from one of Fox's art/writing projects, who alternated between the persona of a stern, serious naval officer, and a devil-may-care rogue-with-a-heart-of-gold who cheated the authorities and won the heart of every lady. She started life as Dual Blades/Willpower, because the rapier/main-gauche combo was so perfectly cool.

At the same time, Fox was considering making a relative or partner for Saxon Valiant, a shield-wielding pseudo-knight with a shadowy background. Since Saxon used Against all Odds and Shield Charge to do ridiculous amounts of damage as a Tanker, Fox thought it would be fun to make a Scrapper counterpoint who used Broadsword's Parry to have huge defence. When she realised that Chase's real surname was the same as Saxon's, the concept was sealed and Chase was rebooted, minus one sword.

Never fear, cheri! Chase Valentine is always on the lady's side!

Just imagine every womanizing, devil-may-care, slightly full-of-himself main character you've ever seen in a period romance novel or adventure. That's Chase. The fact that she's female is completely irrelevant - or at least, goes completely unnoticed by everybody, including herself. Just show her a scheming villain and a fair lady in distress, and she's instantly in her element.

Is she nuts? Well, she's certainly a little bit unhinged. She's fully invested in her hero persona at all times, and seems for all the world to be genuine. The fact that she's still alive suggests that she does have a brain rendered in something more precise than crayon, somewhere beneath her perfectly stereotyped exterior. Her reason for keeping it hidden, however, is known only to herself.

Fair warning to roleplayers - if you're playing an attractive, feminine woman, chances are Chase wants to get into her panties. If she happens to be youthful and/or somewhat innocent, all the more so. Though Chase has serious commitment issues, she's notorious for romantic flings and one-night-stands. At the very least, she's likely to schmooze up to them with a pretty phrase and a rose.

There is some escaping her attention. Mannish women (such as herself) don't interest her. Likewise, characters who are pointedly sexual or "vampy" are probably safe. And villains are villains, even if they are pretty ladies. In essence, she goes for girls who are sweet and pure. With much exhuberance.

As might be appropriate for her character, Chase Valentine's background is (sexily) shrouded in mystery. The only one who knows anything much about her is Saxon Valiant, who identifies her as his brother, Dorian Von Graus Valiant. This means that she was raised in the same artifical "dark ages" scenario that led to his oddly backward mannerisms.

If pressed - by somebody he trusts - Saxon might reveal that he rarely saw Dorian during their childhood, as his "brother" was apprenticed to a shipmaker and entered the navy as soon as "he" was able. Though he met with Dorian only occasionally on "his" visits home, Saxon remembers his brother as a serious, responsible individual, with a great respect for the gravity of the law. One who has met Chase Valentine might be forgiven for thinking he's completely making it up.

The truth of the matter, known to nobody but Chase herself, is that she really was the Dorian her brother remembers, thanks to the conditioning of the shadowy organisation that raised the Valiants in their bizzare medieval simulacrum. When events finally led to her discovering the truth about her world - and that she had been used to kill countless innocent people - Dorian snapped. In her grief, she created the persona of Chase Valentine as a way to retreat from her previous life, and devote herself to heriosm to atone for her unknowing atrocities. Ever so rarely, a shade of this will show through, a brief moment of guilt and grief that quickly gives way to lighthearted charm once more.

When not out swashing buckles or deboning aires, Chase has been known to frequent the vigilante hangout Skid Row. The denizens there are her most frequent associates. Although she is undeniably a "good guy", she seems to have little respect for authority, and is not viewed favourably by HeroCorps, Longbow, or the PPD.

As Saxon's "brother", Chase also has vague affiliations with Calibre, but rarely calls upon such a connection. 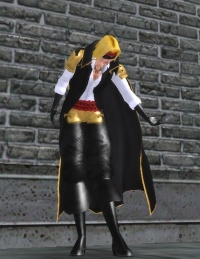 Chase Valentine does not seem to have any meta-human powers - just an absurd degree of skill with her sword, an irrepressible confidence and heroism, and perhaps a remarkable degree of luck. If anything about her is beyond human capacity, it would be her strength of will - it seems nothing can keep her morale down for long.

She does seem to be particularly resistant to psychics. It's not that entering her mind is difficult, but any psi who does so immediately finds themselves swept along with the rollicking narrative of Chase Valentine's persona. Trying to escape this and delve into her secrets seems to be all but impossible.

Chase Valentine always wields a particularly gaudy cutlass, superbly shiny and decorated with gleaming gold accents, which she seems to have named "Valiant". She also seems to have adapted at least enough modern technology to make use of various travel devices, probably "liberated" from more legitimate hero groups.

Despite her steely competence in combat, Chase's lighthearted approach to life seems as much of a refuge as a shield. Even in the darkest moments - even when it's dangerous to be so flippant - she seems genuinely unable to take anything seriously. She also has commitment issues - for obvious reasons, since loyalty is what made her a monster.