Cyberette is angerbunny's character on Virtue. She is a member of the RP super group The Reciprocators and the RP coalition The Shield of Paragon.

Margaret is something of a pendulum of emotive states. She can be very outspoken and involved in a conversation touching on any number of topics without missing a beat but her inability to fully accept compliments, particularly physical, finds her shying away immediately. She can be highly affectionate to those whom she trusts, and particularly open with select individuals. However, her guard is only a breath away, and she can be a vindictive wordsmith, lashing out defensively at the slightest provocation, however rarely in defense of herself and more to the aid of those whom she cares.

"According to Keirsey, the tranquil and reserved exterior of the INFP masks a passionate inner life. Healers care deeply about causes that interest them and they often pursue those causes with selfless devotion.

Occurring in only about one percent of the population, Healers can easily feel isolated. They value harmony and integrity in human relationships, seeking unity of mind, body, and spirit but often find these values to be out of step with the more concrete pursuits of the rest of the world. Feeling "different," they may wonder whether something is wrong with them. But those differences—an ethical nature, a devotion to ideals, a commitment to harmonious interaction—are in fact some of their greatest strengths."

"...Eventually, the individual learns (most often unconsciously) to see people as harmful and a source of negativity, suffering and ostracization. This leads to the development of "ideas of reference," in which the schizotypal individual believes that events are of special relevance to them or that benign events are somehow related to them (e.g., sees two people laughing and believes that the people are laughing at them). The individual may realize that their ideas of reference are irrational, but maintains them nonetheless. This exacerbates the individual's social anxiety, causing them to skew away from society and withdraw into their own world."

Scarring about the eyes and face; a result of a previously failed piezolectric transducer experiment worked into a crystal visor developed independently during her Term at Vectorcorp. She is also unnaturally tall, due to her implant-increased metabolic rate.

Not so much powers as enhancements by means of Subdermal implants and other personal and independently developed technologies that allow her to control sonic frequency and resonance to dramatic effect.

Of her abilities, she prides her ability to protect others and herself with an intense amount of sonic shielding. Billions of nano parabolic resonators within her own skin actually generate the noise through direct synaptic control, however the suits she wears amplifies the waves and re-directs them. Specific to her shielding, she has developed a way to cause multiple layers of sonic waves to actually collide and bounce off one another; making the shields perpetual and self-sufficient for a moderate time after their initial creation. She also finds no limit to the amount of enjoyment she gets pulsing her favorite songs through the shielding; Her suited body broadcasting a constant stream of all kinds of music and sound clips.

Far before she utilized resonant waves to act as a shield, she had developed the ability to focus intense waves of sound into suppressive weaponry. With varying degrees of control, she has learned a number of tricks that cause anything from disorienting and deafening strikes, to physical pressure enough to send her target flying. More often, however, she can be witnessed causing large groups of people to fall to slumber by means of a very precise frequency.

Through resonant pulses and rockets in her boots, she is able to attain stable flight.

Recently, Margaret has toyed with the reversal of her shielding abilities. Instead of protecting those within the fields, it crushes and impedes. This ability scares her to no end as she has witnessed the sheer pain that this can cause living things. She rarely uses it, Mostly by her own refusal.

As well, she has developed a suit which she calls a PPPA (Personal Portable Particle Accelerant) which allows for concentrated particle blasts at varying ranges.

Often pokes her nose into places it's not wanted.

Extreme insecurity about her face and outward appearance.

Is nowhere nearly as effective outside her suit as in, and endagers herself extremely if she utilizes any sonic or resonant ability for longer than a few minutes without it.

Increased metabolism causes her to eat copious amounts of food in one sitting and she must consume roughly 16000 calories, daily.

Voluptuary and Sybarite. Her insecurities about her face cause her to seek other attentions when she can. She bathes in her upset over her injuries, and seeks pleasure to fill the gap of what she considers to be less of what she would have, normally. She wears her heart on her sleeve, and craves acceptance while, ironically, never entertaining the thought that she has garnered any. For this reason, she has what can be construed as an addictive personality.

She is proud of her heritage and blood. She won't replace any part of her body that can be saved, and doesn't submit to cosmetic surgery as it wouldn't be 'her'.

Selfless to a fault, when it comes to danger.

Cyberette generally houses a wide array of directional microphones, emitters, and sensors within the helmets she develops for herself. Her visors are also loaded up with mutable huds and displays.

Directional resonators and emitters. Parabolic reflectors. Directional mics, and primary power supplies here as well. The PPPA, of course, is outfitted with a particle accelerator.

In order to keep her suit running for long hours in the field, Cyberette has implanted a subdermal bioelectric harvestation grid (SBHG). It constantly feeds on her body's own bioelectrics, and stores them in the suits she wears as well as a few strategically placed power cell implants within her. At times where she is not using any powered ability and her suit and backup energy storage units are fully charged, she can start glowing brightly and becomes extremely warm to the touch.

The SBHG has made this unit requisite for survival. With a few minor tweaks to the way she processes calories and sugars, this unit ensures that she doesn't end up putting herself into cardiac arrest even while engaging all her sonic abilities simultaneously.

Starting off as an intern at Vectorcorp in the summer of 2001, Jess Wrote a detailed Dissertation about the potential behind Electrogravitics and Antigravitics as applied by the use of Sonics and ultrasonics. It was highly idealistic, but theoretically sound. As such, It landed her a position as a Department Lead for an R&D team within Vectorcorp; the sole purpose of which was the production of working prototypes for mutable antigravitic drives under the development name of "Project Wavetable". Nearing completion, however, Investors pulled their funding for Vectorcorp's 'Wavetable' technology in favor of Portal Corporation's as of yet undisclosed project. She owns 1,067 different patents with regards to Wavetable technology, and as such was legally able to 'rescue' her life's work from the downfall of Vectorcorp.

The most important thing about the project is that it is now over. All members have disbanded and gone, for the most part, their separate ways. Originally funded by Vectorcorp, the purpose of the project was to create an extremely efficient anti-gravitic drives for use in future transport and military craft. It was scrapped, however, when funding was pulled in favor of PORTAL Corporation's secret efforts.

Margaret is not much of a known hero outside of The Citadel, these days. But She is perfectly content to come to the aid of her fellow 'Cips when the time arises. She currently has an apartment in Brickstown. But usually finds herself crashing out somewhere within the confines of The Citadel.

She is now a Tertiary Tier member of the Reciprocators and does what it is she can to further the team along and assist the other members.

Loves cooking and the food network.

watches at least a movie a day.

Always has a piece of chocolate, usually a Cacao bar, and Energy bars on her.

Comfort Food: White Calrose Rice. Although she loves Jasmine, too. 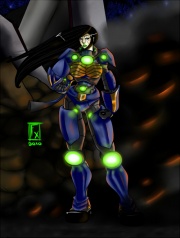 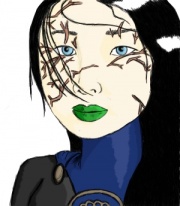