Just like The Electric Fairy, The Cyborg Systre was my first City of Villains character. I started playing her during the three day head start as I'd played in the CoV beta and purchased the pre-order. This time around, I had a much better idea of exactly what kind of character I was making, and as such she was much more well defined from the beginning. 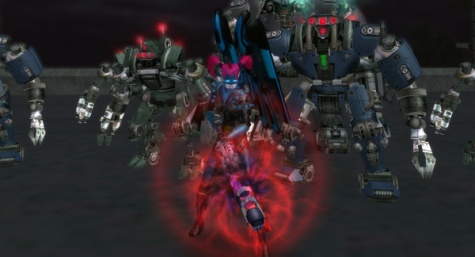 She carries with her a Nemesis Staff. In a pouch in her belt, she also has some Sands of Mu. On occasion, she's been seen with a Quantum Disruptor rifle; she gets a thrill out of hurting Warshades and Peacebringers with it.

The Cyborg Systre was originally part of a secret Crey project to create an elite group of agents for use in special covert missions, and possibly sale of their services to certain governments. She is the genetic clone of a faerie, a magickal creature the Crey managed to capture. Several modifications were made to augment her "natural" magickal abilities, as well as diminish her vulnerability to iron. But more visible than that were extensive cybernetic implants, further improving her senses and maintaining her ability to fly. Combined with the extensive training she received, this made her a formidable agent.

Perhaps too formidable, as Cyborg Systre discovered that she was to be replaced by a more docile version of herself and then deactivated. She escaped the training facility that same night she found this out, but not without first sabotaging Crey's plans to replace her. She reprogrammed her duplicate and then activated her prematurely, causing her dopplegangar to run amok and cause the partial destruction of the complex. In the ensuing chaos, The Cyborg Systre made her escape, armed only with her pulse laser rifle. On her way out, she stole some robot schematics, themselves stolen by Crey from the Malta. Her decision to take them was very spur of the moment. She thought it might prove useful.

She remained in hiding for quite some time, during which she observed her replacement agent turned rogue herself and became the hero Electric Fairy. At first she grew slightly jealous of her "inferior copy" gaining so much recognition and being lauded as a hero, but soon The Cyborg Systre realized that perhaps her sister clone could prove to be useful. She constructed several robots based on the plans she stole, as well as a device she planned to use on The Electric Fairy. She lured EF into a trap, who at the time was still unaware of CS's presence, and CS was able to take control of EF. She then conducted a full scale attack on the Council base on Striga Isle, commanding both her robot army and The Electric Fairy from a remote location. She did not enter the base itself until her robots and her sister had secured it.

Knowing what was at stake (it was unlikely that CS knew everything that was going on in that base, but once she did, she was certain to take advantage of it!), and wanting to save their friend, several of EF's allies came to her rescue once they were able to piece together what had happened. Unfortunately they had to go through The Electric Fairy first, before they could capture The Cyborg Systre and release CS's control over EF. But the heroes prevailed, and CS was arrested and sent to The Zig in Brickstown, pending her trial.

She hadn't been there for very long when Arachnos launched "Project Destiny"...