In Hawaiian mythology, it was believed that the deceased could be offered to the sea, returning to the living as sharks.[1] Perhaps, there is more to this story than folktales and superstition have led us to believe, for there exist beings of great power that can shift between the worlds of men and shark, at will. These beings live much of their life in the murky depths, where the sun glimmers through upon strange aquatic denizens. Occasionally, they pay visit to the world of man. Sometimes to perform a specific quest; other times to punish those that would harm the ocean. And, other times still - to feast upon mankind as their foolish prey, so eager to cross the will of the shark gods. One thing is certain: The weresharks are beings not to be trifled with on land or sea. The Deadliest Catch, as he has become known to be called, has become one of the most powerful weresharks in all of the world and he has made it his mission to wreak suffering upon mankind for their crimes against the creatures of the ocean.

Birth of a Predator

The Deadliest Catch, as he has come to be known in the Rogue Isles, is a wereshark: Also known among changing breeds and skin-walkers as Rokea. He was born off the coast of a small fishing village in Cape Verde to a blood-line of wereshark and great white sharks where he learned the ways of the deep and survival in the seas. At a very young age, he took interest in the activities of humans and began walking among them and learning their ways. He took the name Manta Mundongo, but quickly drew suspicion among the locals for his odd behaviors and cold demeanor. Before long, his true nature would be revealed.

The Truth of the Nature of Man

Over the next several months, Manta continued walking amongst the humans of Cape Verde, learning their ways. At night, he would take to the seas to feed. Many wondered about the strange boy’s private life.

Cape Verde, being a coastal area, was known for its fishing and commerce related to these activities. Unfortunately, shark fishing was [and still is to this day] an all-to-common practice. Illegal poaching is pandemic to the region. [2]

Manta had been just a strange, quiet child until the day he witnessed villagers "murdering" his sea-faring brethren for sport and profit. It is then that he made a decision that would change his life forever. From this point on, humans would no longer be something of a fascination to him; instead they had become his prey. The next night, Manta viciously murdered the poachers and gruesomely over-filled their guts with buckets of chum. The victims were found the following morning hanging by fish hooks at the docks, baking in the morning sun…

After the incident, Manta became feral and enraged. He began systematically eliminating new villagers, each night. The village-folk became panicked. No one knew what evil had befell their poor, wretched village. Bodies littered the coast and sharks, in turn, filled the waters. Soon, only a dozen or so villagers remained and they decided to abandon their cursed village. Manta’s revenge had been sated and the once prosperous fishing village was now a bloody, death-filled realm.

From there, Manta left, traveling with his brothers and sisters of the sea. He had lost interest in the upright, talking apes and decided to be with shark-kind for a time. For many years, he would swim with sharks the world over searching for other Rokea. Tales of a giant great white shark would proceed him as he would occasionally terrorize any locals who would would harm sea life. His journey would take him the world over, from the coast of Africa all the way to the Rogue Isles.

A Villain is Born

After years of wandering, it was a fateful encounter with the Arch-villain, Mako, that would shape Manta’s future. As Manta and his slew were passing through the Rogue Isles, he saw Mako fighting some Longbow on the docks of Grandville. Manta immediately jumped into action to assist a fellow shark-man. Mako was different than he was since he was not Rokea, but he found commonality between the arch-villain and he.

To the public, The Deadliest Catch is known only in tales and local superstition. Fishermen and dockworkers tell of a man-shark that rises from the depths to snatch away a human meal when the full moon gleans on the still waters of night. Indeed, The Deadliest Catch makes it a point to prey upon any who would harm the oceans or ocean wildlife, particularly, poachers and polluters who are often stalked and specifically targeted for night-time meals. The Deadliest Catch is particularly vicious if sharks are harmed and will stop at nothing to destroy any who would harm his brothers and sisters of the sea.

The Deadliest Catch recently encountered a clone of himself created by the 5th Column. This clone was going to be used as a weapon.

The Deadliest Catch has several different appearances depending on its current form. He can assume five forms: Homid, Glabrus, Gladius, Chasmus, and Squamus.

The Deadliest Catch’s form most used when performing various deeds of ill content in Mercy Island is the Gladius form, which is the hybrid form between man and shark. In this form, he is terrible to behold. Standing at 7’ tall and weighing around 500 lbs of solid muscle, The Deadliest Catch appears as a monstrous blue and white behemoth. His features are a cross between the most fearsome of shark and man, having the head and tale of a great white shark, with a heavily muscled build and fearsome claws. His eyes gleam red with feral ferocity when he enters a blood frenzy. His skin is that of razor-sharp, shark skin which will cause horrible wounds if brushed against. 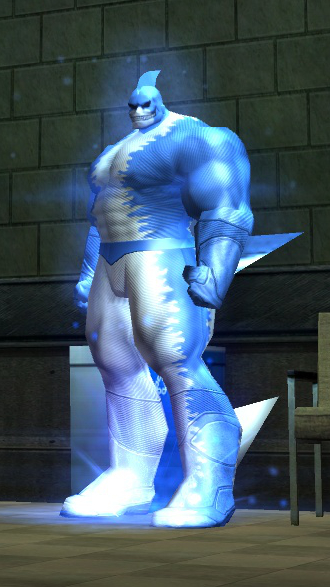 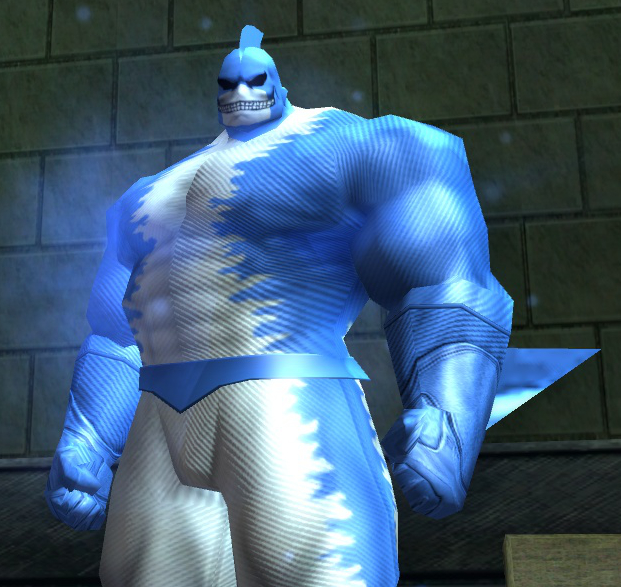 Primarily, the Deadliest Catch’s power is related to the abominable merger of man and shark. As such, he is able to assume several forms along the spectrum between human and shark. His powers will vary depending on his lycanthropic form, but his preferred attacking form in the streets of Mercy Island is his Gladius form.

This is the basic human form assumable by Rokea. In Manta's homid form, he appears as an unattractive, West-African male with a faux hawk.

This form is a humanoid/shark hybrid, having various shark features starting to manifest. Called "Round Back" by the Rokea, all hair is gone from the pale body and the dorsal fin begins to take shape, on a heavily muscled, larger build.

This is Manta's preferred form. Standing 8 feet tall, this is the nightmarish standing shark form. Called, "Standing Jaws" by the Rokea, this form has all the power and ferocity of a Great White Shark with the intellect and versatility of a human. In this form, The Deadliest Catch is an unstoppable, killing machine.

This form is that of a prehistoric shark, not unlike a great Megalodon from the Pliocene era. This is the form that invokes true fear in mankind, being the stuff of nightmares. Horror movies have been based off of this giant sea monster and this is the form that The Deadliest Catch assumes when he is prowling the seas for illegal poachers. Among the Rokea, Chasmus are called "Fighting Jaws".

This form is the basic shark form assumable by Rokea. Manta appears as a large, fearsome, blue and white Great White Shark in this form.

The Deadliest Catch is ferocious in combat - able to rip and shred with claws and teeth with blinding speed and savagery.

As his victims bleed, The Deadliest Catch becomes more powerful. Primal instincts from his shark bloodline provoke primitive feeding frenzy triggers, as he senses injury in his adversaries. The more his adversaries bleed, the more powerful he becomes, until he whips into a primal frenzy of claws and teeth. Once in this frenzy, The Deadliest Catch is even more dangerous - becoming faster, stronger, and ravenous. In some cases, The Deadliest Catch has been known to hungrily devour hapless victims as the taste of their blood becomes irresistible. This is particularly true when facing heroes that are fish-based, such as merfolk or other aquatic mutants or beings.

Being a lycanthrope, The Deadliest Catch regenerates at an astounding rate. As a result of his specific mutation, he has evolved further beyond other Rokea in this regard.

Infused by his lycanthropic power, The Deadliest Catch is able to move at astonishing speeds. This is further amplified when he is in a blood frenzy. This allows him to overwhelm opponents in combat and also move past them undetected, should he desire to do so. In the water, only elemental beings are a match for his speed and ferocity.

The Deadliest Catch is able to breath underwater with the normalcy of a shark or other aquatic animal. He can do this at will and regardless of his current form. 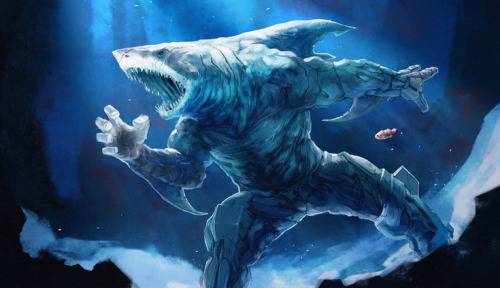 The Deadliest Catch’s presence causes fear and delirium in all normal folk and can also affect super humans and aliens as well. Only those of the strongest will can resist this fear, as The Deadliest Catch is a frightening beast to behold - particularly in his Gladius and Chasmus forms.

The Deadliest Catch is susceptible to fire and heat-based attacks, given his aquatic nature. Additionally, psionic attacks

Some of the inspiration for this character, of course, comes from the "Deadliest Catch" TV Show, indirectly. This character's name pays homage to the show, but also there is a bit of irony and comedy in the character name, as well, since humans are often his prey and this fish-man is the deadly one doing the hunting! So, there is some fun word play and irony with the character's name, which I find enjoyable. 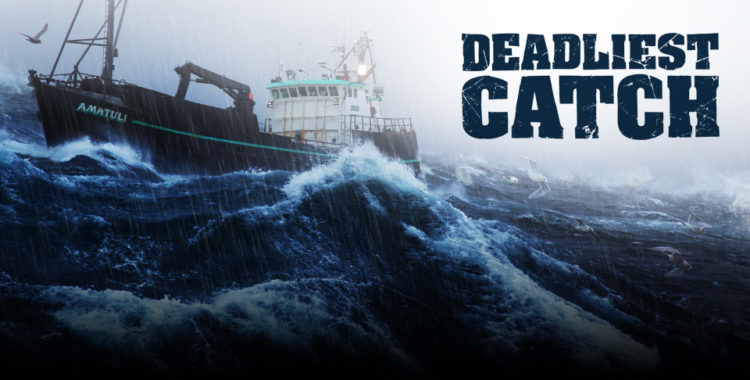 The primary influence for this character is the Rokea version of the weresharks created by Whitewolf Game Studio. I have always found Whitewolf changing breeds to be fascinating, and, of course, the weresharks were of particular interest. 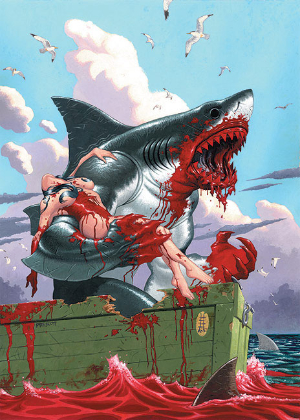 Of course, the movie, “Jaws”, just has to be an influence when creating a shark-based character, and this holds true with the Deadliest Catch. In a way, I almost rooted for Jaws as a teenager, so this character fulfills a bit of that darker side without being a complete psychopath! The prehistoric Megalodon was also a big influence on the character. I find this prehistoric animal to be both fascinating and frightening at the same time, which is what I was going for with this City of Villains character, as well.