"Please understand... this is for science."

Forsythe is one of the senior members of the private research cooperative known as the Evil Geniuses for a Better Tomorrow. The name of the group, as well as his rank ("Evil Overlord"), was chosen in deliberate irony.

Forsythe was once nominally under the patronage of Black Scorpion and a loyal servant of Arachnos. Privately, he has nothing but contempt for them and sees them only as a means to his own ends. To Forsythe, Scorpion himself represents all that is wrong with Arachnos: an arrogant thug, misusing technology he didn't create (and barely knows how to operate) to oppress and bully others and satisfy his crude, selfish desires.

In his own personal continuity, Forsythe replaced Westin Phipps as the manager of Grandville's Haven House from early 2007 to late 2009. Mr. Phipps went missing in April 2007, and most now believe that some terrible fate has befallen the outspoken community leader. (In fact, after learning of Phipps' true nature and that of Haven House, Forsythe deliberately befriended the man in order to betray and murder him.) Forsythe was betrayed in turn by Sublime Razor, who convinced him to turn Haven House over to her (in the guise of Francine Primm) by sabotaging and threatening the community center under her regular identity.

Forsythe's intent was to turn the lie of Haven House inside out, convincing Arachnos that it was still a tool of control and false hope while providing real help to the people in the Gutter. Sublime Razor found this situation as intolerable as Forsythe did Phipps' original deception, and undertook to set things "right." Forsythe's disloyalty has been exposed to Arachnos and he is now an outlaw, able to rely only on his own resources and those of the Evil Geniuses to avoid capture or worse.

Forsythe is a man of contradictions. On the one hand he is kind, polite, friendly and charming, even gentle. He is an idealist who dreams of a world without poverty or want, without ignorance or prejudice, without war, disease, famine or even death. A world where human consciousness is unshackled from mortal flesh and its animal urges, transferred into machines that will sustain it forever. On the other, he is a ruthless fanatic who is willing to sacrifice anything or anyone to make this vision a reality. He has killed hundreds of test subjects and executed "obstacles" without blinking an eye. Though not without regret... never without regret.

Forsythe knows that he is probably damned (at least in a figurative/secular sense), and may never be allowed to enter the Utopia he intends to create. He has too much blood on his hands. But like everything else he has done, he believes that it's necessary and justified by the Greater Good. That may be the only illusion he has left.

Forsythe is a normal human being, though a very intelligent and determined one. He has no metahuman abilities and only one cybernetic augmentation (a hip replacement).

Forsythe is never without his tools, from the simple (pliers, scalpel, soldering iron) to the complex (his battle drones). Some are partially or entirely of his own design.

Forsythe is usually accompanied by a force field generator, kept aloft by a small anti-grav module and propelled by cold gas thrusters, which is programmed to follow him closely. For times when this defense proves insufficient, he also carries a fully-stocked field medical kit, including a portable defibrillator, a tissue regenerator and a triage beacon.

A "souvenir" of one of Forsythe's previous workplaces, the Hazardous Environment suit has served him well in the Rogue Isles. The suit provides some protection against extreme temperatures (both hot and cold) and radiation, as well as small arms fire, corrosive or toxic substances, etc. It contains enough oxygen (supplemented by internal recycling) for half an hour of moderate activity with the helmet sealed. The onboard computer can diagnose damage to both the suit and the wearer, and automatically administer drugs to the latter. The helmet's visor serves as a HUD. 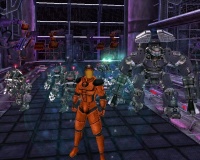 Forsythe's weapon of choice, when he must defend himself or take matters into his own hands, is a laser pulse rifle. The rifle has two power settings and fires pulses of coherent light that cause explosive surface heating of most targets.

These semi-autonomous units are Forsythe's assistants, guardians, and remorseless killers. He has not seen fit to endow them with more than rudimentary artificial intelligences, or even proper names. (The battle drones are designated Alpha, Beta, and Gamma, the two support units are Delta and Tau, and the heavy assault unit is Omega.) He directs them with voice commands and a control pad mounted on his left forearm. They are outfitted with an impressive array of weaponry, from rapid-fire pulse lasers to seeker drones, plasma cannons and mini-missiles. They are also equipped with non-lethal restraint systems (see below).

Forsythe prefers to avoid conflict when possible, and has invested in the purchase of a stealth suit for quiet intrusions. When activated, this high-tech bodysuit renders the wearer nearly invisible, as long as he doesn't move faster than the thermoptic camouflage can adapt. At Forsythe's age, this is rarely a problem.

Dr. Forsythe gets around the Rogue Isles by means of a personal teleport rig. His is a common but high-end consumer model, very reliable and easy to operate; it can teleport the wearer to a new location, or others to him.

To discourage pursuit and immobilize subjects for capture or termination, Forsythe has equipped his Protector drones to dispense caltrops and a fast-drying polymer spray. Using technology obtained from Black Scorpion's labs, he has modified the sprayers of his robots for higher output, allowing them to cover a wide area or completely cocoon and incapacitate a single target.

Dr. Forsythe holds several advanced degrees. His primary field is cybernetics and its related disciplines. He is also a medical doctor (though he lost his license many years ago) and a competent surgeon, specializing in neurology.

Forsythe is, as noted above, only an ordinary human. If an opponent can penetrate his bodyguard of robots and traps, he is relatively vulnerable. He is acutely aware of his advancing years and fair but slowly declining health, which makes him more desperate and determined to finish his work before the Reaper claims him.

Jeffrey Forsythe was born in 1947, at the height of the baby boom, in North Carolina. He was an intensely curious but polite and responsible child, often looking after his younger siblings. As a teenager, he was involved in the Civil Rights movement after the sit-ins in his hometown. He was one of the clean-cut and very serious young black men often seen in archival footage of that era. A follower of Martin Luther King, Forsythe was devastated when King was assassinated in 1968.

Forsythe's parents were able to send their studious eldest son to college, and with hard work and student loans, he put himself through medical school. After his residency at UNC-Chapel Hill, he was hired by the Veterans Administration and found himself treating the wounded and maimed of Vietnam. This experience deepened his disgust with the sorry state of the world, as well as introducing him to the new work being done with bionic prostheses.

In the 1980s, with his loans finally paid off and a few years of private practice under his belt, Forsythe went back to school - this time at CalTech, where he threw himself into cybernetics, robotics, and man-machine interfaces. He soon learned of the emerging transhumanism movement at nearby UCLA and became a member and avid supporter. Here was a school of thought that proposed to not merely treat the many ills of the world, but to eliminate their root causes, bringing freedom and prosperity to all.

Forsythe also found love in California: June Watson, a computer scientist and fellow transhumanist. They dated for several months (the phrase "Watson, come here, I need you!" became a private joke between them) before deciding to get married. Shortly after their engagement, however, Watson was diagnosed with pancreatic cancer that swiftly spread to her other organs. Forsythe consulted with his fiancee's doctors, but there was nothing anyone could do: her own body was killing her.

He kept his promise regardless, and Jeffrey and June Forsythe were married in her hospital room on the date they'd agreed on. She died three weeks later. He still wears his wedding ring.

Afterward, Forsythe became even more obsessed with the notion of non-biological existence and immortality. By "uploading" their minds to a computer, people could live forever in virtual reality; they would never get sick, and they would never die. Nor would they ever want for anything, or fight over territory or resources, or judge each other on trivial differences like the color of their skin but solely, as Dr. King had said, on the content of their character.

What few of his colleagues cared to discuss or acknowledge, however, were the immense technical problems involved in accurately recording the contents of a human brain and encoding that information into a computer program. To Forsythe, these were now very practical hurdles to be addressed and solved. Someone had to lay the foundations for Utopia, and that would be him. He had not been able to save his wife, but he would save as many as he could.

He turned to the government to fund his research, and they happily obliged, shuttling him from one top-secret facility to another during the 90s. He was willing to work on military projects if it meant access to the resources he needed; he told himself, for the first time but not the last, that the results would be worth it.

His work hit an inevitable snag when he exhausted the possibilities of animal test subjects; not even chimpanzees could give him all the data he needed to fine-tune the upload process. No, he needed human minds - encoded personalities that he could talk to and ask them what it was like, what they remembered, test their responses and assess the fidelity of the transfer. And since the process destroyed the brain as it "read" it, he couldn't ask for volunteers...

According to the evidence presented at trial, Dr. Jeffrey Forsythe abducted and killed no less than 27 homeless people, runaways, and other transients. All of the uploads were flawed, most of them hopelessly insane or damaged and barely sentient; he'd already deleted all but the latest when he was finally discovered, and that one was terminated by court order. He was sentenced to 27 consecutive life terms, without possibility of parole. (He remarked to the sentencing judge, "I'm afraid I don't have that long, Your Honor. But I'm working on it.")

After an escape attempt where he fashioned several surprisingly complex devices out of materials he'd acquired or had smuggled to him in prison, Forsythe was sent to the Zig in Paragon City... where Arachnos promptly broke him out. He has been at large in the Rogue Isles since October 2005.

Forsythe has learned that there are some organizations (notably Crey and the Malta Group) which already possess at least partially-successful memory upload and transfer technology. He would very much like to get his hands on schematics and/or working examples.