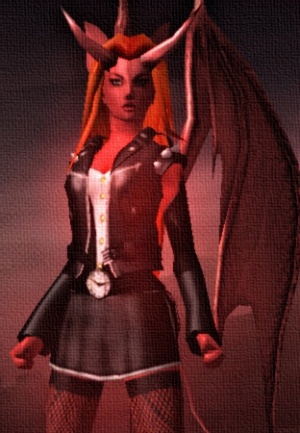 ”What’m I? I’m an ember demon, summoned to wreak havoc on the world of humans and serve the will of my master. D’you wanna cuddle?”
· Demonic Warrior ·
Ember Demon
Magical Artillery
Defender of a New Home
Player: @RE-Sullivan
Affiliations

Faeblaze is a demonic hero who seems to delight in everything -but- wanton destruction. Though she has shown herself to be completely capable of utterly obliterating just about anything she wishes, Faeblaze exhibits friendlier, more altruistic tendencies. She appears to be very curious about—well—everything, and is always overjoyed to help people. Nevertheless, some people have said that being saved by a demon is a bit unnerving.

Act I: The Summoning

Faeblaze was created by a sorcerer as a weapon. The sorcerer set forth to conjure an ember demon, with which he would rain down fiery destruction upon any who stood in his way. Then unnamed, the demon served him loyally, both as a weapon and as a companion. She played out her part, terrorizing St. Martial for her master. That, however, was short-lived—even the Rogue Isles has heroes.

The sorcerer and his demon were tracked down by a woman named Sheena Maverick. While not truly a costumed hero or vigilante, Sheena was a person with the power to do the right thing. Being versed in the magical arts, Sheena tore apart the sorcerer’s bond to his demon, setting the creature free. Without a master to serve and without orders to carry out, the demon reverted to a curious, child-like state. Sheena realized that this being was sentient, if not sapient. Out of curiosity and altruism, she took the creature under her wing, naming her Fae Maverick.

Fae showed herself to be capable of learning extremely quickly, and was able to pick up English easily. Sheena became attached to her, seeing her as a younger sister or even a child. Feeling that St. Martial was an environment far too dangerous for—essentially—a child, Sheena picked up and began the process of moving to Paragon City. Thanks to some sneaky Rogue Isles know-how and the commonness of supernatural creatures in Paragon, Sheena was able to move into New Thebes, in Talos Island.

Fae matured quickly, learning how to function in human society. Physically, she has not aged since her creation, and it is likely that she will always exist in her current body. Now with the mental processes of a young adult, Fae has taken it upon herself to use her incredible demonic abilities for the good of the city. Having grown up around heroes, Fae was easily inculcated with the costumed culture. She became Faeblaze, a noble demon warrior.

Fae has realized that her early life was full of dark acts. In recompense for this, she has devoted herself to penance for her sins. Being a full-time hero, Fae uses her influence and power to uplift those who find themselves down, and try to spread the idea that even those born from evil can champion the light. She is especially sensitive when it comes to other magical creatures; Fae is a staunch defender of the rights of other magical beings, and is quick to protect them if they become the target of discrimination.

Fae eventually discovered the Pact of Absolution, a group which seeks to absolve former villains, criminals, and evildoers of their sins through taking an oath of righteousness. Knowing her past and the horrible things she did as a weaponized demon, Fae quickly found herself a home with the group.

Fae is a female humanoid of average height. Her youthful, voluptuous build suggests that she was summoned to please her master in more ways than one. Her skin is an unearthly tint of red, and is uncannily soft and smooth. Her hair is coloured like fire, with hues of red weaving their way through hues of orange. Her eyes are an inhuman yellow, and glow with a mystical thrum. Her body radiates an intense heat, though Fae seems capable of stopping herself from burning things she touches.

Fae’s voice is youthful and bubbly. She speaks quickly, often jumbling words together.

Despite her destructive power and ostensible reason-for-being, Fae is a cheerful, curious girl—though often naive. To Fae, anybody who doesn’t pose an immediate threat is a friend. She is extremely affectionate, often seeking hugs and cuddles from those she surrounds herself with. One-on-one, however, Fae may let her guard down and let through to the surface a strange, internalized melancholy.

Faeblaze is seen as an energetic, enthusiastic hero, perhaps a little overzealous in her pursuit of adventure. Many citizens feel uneasy with her, considering her demonic origin. Nevertheless, Faeblaze has never harmed an innocent—which is impressive, given the raw power at her fingertips. She is exceedingly careful to only hurt the criminals and villains of the world.

Fae is a master at using magical fire to entrap and incinerate her foes. This ability comes naturally to her, being an ember demon. She has no single specialization in how she wields the element; she can control, blast, close quarters, empower herself, conjure raging storms of fire, and even summon lesser demons. While she may not be a master at any one of these areas, Fae is a very versatile combatant.

While Fae is not a melee combatant, she is still capable of holding off a foe. Her lack of physical strength and athleticism, however, afford her little offense in this area. Fae’s greatest physical ability is the use of her wings to sustain flight. Her wings never seem to tire, no matter how long she remains aloft. She can achieve surprising velocities with them, as well. 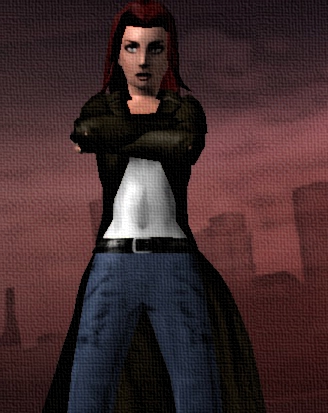 Sheena was a small-time mage in St. Martial, doing what she could to help people around her. When a rogue sorcerer started using his pet ember demon to terrorize the island, Sheena decided it was her time to step in and do something. Being only an apprentice of the arts, there wasn’t much Sheena could do to directly oppose the magician and his pet—instead, she set to researching a method to break apart the summoning bond between the two.

After the ordeal, Sheena noticed that the demon was strangely human in her actions after being freed from her slavery. She took the creature under her wing, naming her Fae Maverick and treating her like a baby sister. She ultimately moved to Talos Island to raise the girl, and the two remain extremely close. Sheena is the only person in whom Fae can place her complete trust.

The Pact of Absolution 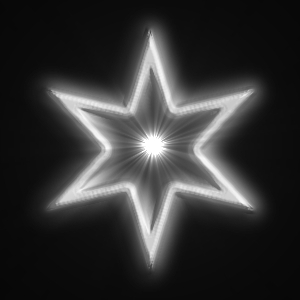 The logo of the Pact.

The Pact of Absolution is a group that seeks to help former evildoers redeem themselves through a new life of heroism. Fae has joined this group, hoping to atone for her sins—even if she wasn’t under her own control. Fae has found a number of new friends in the group, and she greets all newcomers with an excess of affection.