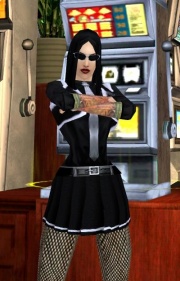 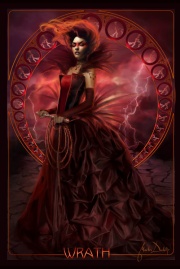 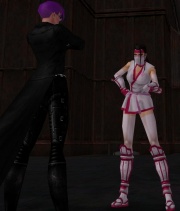 Jonin Princess, aka Lady Chihomi, is the alter-ego Chastity Blades has adopted for her undercover assignment in the Rogue Isles. She is using this secret identity to act as a double agent for Vanguard and Longbow. Her mission for Lady Grey is to investigate Arachnos efforts to penetrate the Vanguard, while Longbow wishes her to develop a network of informants, as well as to identify any other information of potential interest, such as research projects, operational plans, technical data, and intelligence on agents or affiliates.

To accomplish this dangerous assignment, Chastity called in some old markers in the underworld - notably that of Soke Matsumi Toshihiro, last jonin of the Obakewaban-ryu ninja clan, grandmaster of the mysterious and dangerous "Phantom Demon" taijutsu, and sole inheritor of the secret Trulkor scrolls brought clandestinely to Japan in the 13th century by Tibetan monks fleeing Mongol invaders. It wasn't easy to convince Soke Matsumi to share nearly all the secrets of his "Six Moons" technique with a kunoichi (and gaijin to boot!) but Chastity reminded him of his debt to her late ninpo roshi, Takamatsu Toshitsugu, and he relented.

Surgically altered to appear Japanese, and armed with her mastery of the "Six Moons" technique, her alter ego as Matsumi Chihomi, adopted daughter of the last jonin of the Phantom Demon clan was finally secure. Following clandestine insertion into the Zig she quickly established contacts among the prisoner network and began the process of establishing her reputation with the Arbiters as a reliable and effective mercenary-for-hire. 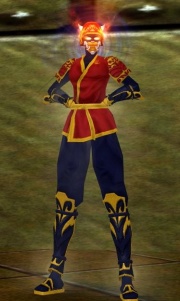 Lady Chihomi often goes by "Jo" to her English speaking associates. When she first came to the Isles opportunities for an unknown, unproven kunoichi were few, but she soon gained steady employment with the Crimson Dawn, a global cartel of female yakuza led by a matriarchal oyabun of great power who claims to be a goddess incarnate. For a time they remained her exclusive client and she even made friends there. Recently, however, the leader of the group disappeared and the group has since effectively disbanded, leaving Jo to take up contract work with the Stiletto Heeled Executioners, a villainous counterpart and nemesis to the Stiletto Heeled Enforcers. She was also invited to take up the faculty chair of Wrath in the Sigma Iota Nu.

Lady Chihomi is tall for a Japanese woman, standing over 5'9", with a slender but perfectly proportioned and lightly muscled build. She has very pale skin, large dark eyes, finely boned features, tattoos of celestial dragons on her forearms and a cascade of sable black hair that she often collects in a ponytail or wears in a bun secured with hairpins that double as weapons. She wears Western clothes when relaxing, but traditional costumes that often bear an Oni motif when on assignment.

When adopting the persona of Matsumi Chihomi, Chastity has two contrasting demeanors which she refers to as the "Geisha" and the "Shadow." In public as the "Geisha," she is bright, cultured, modest, cheerful, polite, courtly, demure, empathetic, reserved, and submissive, avoiding confrontation at all costs and presenting painful facts as gently and indirectly as possible. She will sing, dance, play games, laugh politely at jokes, lend a sincere ear, and otherwise be harmonious and stimulating company, making every effort to put those around her at ease and even accepting untoward advances with endless patience, all the while manipulating, observing and making notes of everything she thinks might be relevant to her dual mission.

In private and when confronting her enemies as the "Shadow," however, she is professional, highly competitive, contemptuous of men, sardonic, vengeful, and theatrical, seeming to revel in the role of a ruthless assassin while repaying any abuses she suffers with interest. She will often let a target know the reasons why they are being eliminated beforehand, usually in their own private living quarters. She makes little effort to hide her contempt for most other villains, whom she despises and sees as weaklings and cowards who only act powerful and bold by virtue of Arachnos sponsorship and protection. Jo claims she came to the Rogue Isles on the insistence of her Soke, who charged her with spreading the fame of her clan to the elite supercriminals of the world after receiving permission from the Emperor of Japan himself.

As Chihomi, Chastity is as lethal in hand-to-hand combat as ever, but exclusively uses Kenjutsu, Jujitsu, Aikijitsu and Ninjitsu techniques.

Unlike typical kunoichi who make extensive use of poisons, Chihomi prefers the quick kill strike and attacking vital areas of the body. If her opponent is skilled or powerful enough to fight back she will block or dodge incoming attacks and attempt quick counterstrikes, hoping to land a crippling blow with a well placed blade or nerve strike. If it looks like she is losing she will use her smoke bombs and mesmerizing movements to distract the opponent to make a hasty escape, only to return later to strike from the shadows.

Her ace in the hole is her mastery of the Oniwaban-ryu "Trulkor" taijitsu, an ultra obscure ninpo originally derived from Tibetan warrior-monk secrets that allows one to summon and command the ghosts and demons of the underworld to do one's bidding.

Chihomi has also trained a small number of students since arriving in the isles, and some of them have proven to be particularly adept. They are all fanatically loyal to her, having all been rescued from terrible fates.

When undergoing missions as the Jonin Princess, Chastity must forgo the use of her Mk.IV Tactical Chastity Belt and her Warshade abilities. Also, when forced to conduct operations against a hero organization, she will make every effort to give advance warning to her handlers, and refrain from using lethal force, but will strike to incapacitate and render unconscious. She is sufficiently skilled to usually make these strikes with enough precision to appear lethal, but a keen observer familiar with human anatomy might notice this. If questioned about it, she will usually say she never kills unless it is specified by the client.