Over 3000 years ago in a land ruled by gods and kings, one man fought the odds and rose from poverty and squalor to a position of power and honor. And just as quickly as his life had turned around did he see himself cursed to fall back to the depths he had crawled from. This man's name is Kamen Hotep. 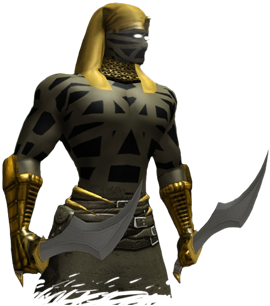 Once living the life of a bandit, a young Kamen Hotep only stole from those whose riches were plenty. This was not out of greed, but was his only choice to survive. Orphaned as a child and forced to live on the streets, Hotep felt he had no other choice than to fight and steal. It wasn't until he made an attempt to steal from his king's palace was he caught.

Trespassing and theft of such a magnitude was punishable by death, and the guards were ready to execute the young man. However fate had intervened, and King Ramses II himself appeared, calling the execution off. The king recognized the man's talents and offered him a deal. Hotep could either be executed for his crimes against his country, or instead serve Egypt and become a warrior in the king's army.

Years had gone by, with Kamen Hotep proudly serving in his country's military. He trained and fought constantly, adept in the ways of the blade. Winning countless battles, he eventually gained the trust of the king himself and was granted the honor of defending the palace. Time had gone by, peace set in, and Hotep was finally living a life he could be proud of.

What happened next, no one knows why. But the warrior sacrificed everything he had earned as he made an attempt on King Ramses II's life. Caught in the act, the king survived and Hotep was forced to flee the palace. Now once again a wanted criminal, he was pursued by his country's military. Only now, with a sizable bounty on his head, the once-warrior was chased by both Egyptian soldiers, hunters, and mercenaries alike. It seemed the only support he could count on was from the gods. 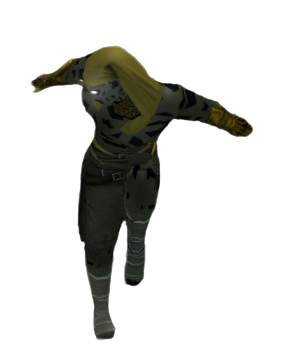 Forced into the deserts by his pursuers, it was by chance that Kamen Hotep discovered a long lost temple dedicated to the god Set. Taking refuge inside, he discovered a pair of gold-plated gauntlets. Although partially destroyed, the walls of the temple told part of a tale of how the Followers of Set managed to gain the god's favor and were granted a great reward. Scrawled along the walls, however, was a warning: "No living mortal may wield the power of the gods."

Quickly running out of options as his pursuers closed the gap, Kamen Hotep grabbed the gauntlets and slid them on his arms, hoping their power would aid him in fending off his pursuers. As the warriors and mercenaries entered the temple, they were met with the bandit's corpse, the curse of Set killing the man. King Ramses II ordered the temple sealed, and Kamen Hotep mummified inside with his gauntlets so no one may fall victim to the curse again.

In March of 2008, archaeologists discovered the ancient temple of Set, and the mummy inside. He was immediately shipped off to Cairo, Egypt, to be studied. Afterwards, he was shipped from museums all over the world to be put on display before finding himself at the Museum of Paragon City. It was there that the world would see the return of Kamen Hotep. 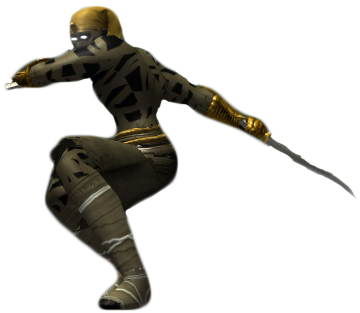 A typical battle between good and evil took place at the museum, with the hero prevailing. In a moment of desperation, the villain used his mastery over the undead to reanimate the corpses and bones within the museum as his minions, the mummy being among those awakened. Brought back into the world of the living, the curse of Set took hold. Sensing no heart beat nor pulse within him, he did not succumb like before but instead unlocked the power sealed within the gauntlets, regaining both his mind and soul. Waking up in a decayed, lifeless body with incredible power, the warrior, in a state of confusion, slayed both the hero and villain and escaped the museum.

Years passed, with Kamen Hotep adapting to society, learning our ways and language. He has been branded a criminal, seeking power for an unknown reason and refusing to allow anyone to stand in his way. He's temporarily allied with many villains, none of them capable of granting him the strength he seeks. His more recent actions involve affiliation with the group known as United Underworld. His goals remain unchanged, and it is unsure if he will ever reach the end of the path he walks.

Armed with two scimitars, Kamen Hotep was an adept warrior before death. Now empowered by the god Set, he possesses increased strength, stamina, durability, agility, and even heightened senses. Further more, he has a mastery over the sands themselves, wielding them defensively to cloud his opponents vision and make them less accurate. Although far from totally impervious to damage, should he suffer anything severe the sands will allow him to recover anything sustained.

Strong as he is, Kamen Hotep carries with him powerful weaknesses. It's entirely possible to overpower and defeat the warrior, as the strength he is gifted has limitations. Hotep is also susceptible to powerful fire-related attacks, due to the bandages he is wrapped in.
Retrieved from "https://virtueverse.net/wiki/Kamen_Hotep"
Categories: Character | Villain | Scrapper | Magic | Undead | Egyptian | United Underworld