This article is a work in progress. Knightward is my first character and still one of my favorites. And no, I didn't get the idea for him from Full Metal Alchemist. Infact, I can't pin any particular source of inspiration for him, but Full Metal Alchemist definately didn't play a part as I had never seen or heard of the show when I made Knightward.

Knightward's exact personality is hard to pin down. In most social situations he is has a tendancy to stick to formality, often it is executed awkwardly due to his culture shock in the modern world. The frequent result of this is a relatively unassertive demeanor that appears "stuffy" and somewhat off-guard. Among those he shares close, informal bonds with Knightward is more relaxed and assertive, but his archaic speech becomes more prevelant, indicating a conscious effort to attempt to fit in with most company. When in combat however, Knightward is not only quick to react, but often keeps his calm even in the face of overwhelming odds.

Knightward is an expert swordsman. While some suspect that Knightward's sword is as magical as the armor he inhabits, the truth of the matter is that it is an old, if ordinary, sword. Any impressive feats he performs with it are merely from extensive practice. What is supernatural about Knightward's capabilities is the darkness he summons around himself. While he can affect others with it, the darkness he summons largely affects himself, affording far greater protection than he would otherwise have. It is likely that this power is a result of being summoned from the dead, and Knightward himself refers to it as the "Power of the Grave."

Knightward's armor will take a rusted and tattered appearance after enough extended damage. Thankfully, it quickly restores to its original integrity.

Knightward's "body" is an interesting case as well. It is simply a suit of armor his spirit has come in possession of. The fact that it is the armor he wore in his living days is probably the connection that allows this possession to work. This unique state of being allows Knightward to be in several locations at once depending on how much he wants to disassemble himself, and when in deep thought he has developed the habit of carrying his "head." The interior of his armor is notably cooler than the outside air, often to the point where there is a thin layer of frost inside.

As Knightward has spent more time acclimating his spirit to his armor he has become better able to manipulate it.

As acclimation to his plate mail body has peaked, Knightward is able to fight with even greater intensity.

From his desire to help his comrades and to "catch up" with modern technology, Knightward eventually obtained a medical device from Herocorp. While its aid is minimal compared to heroes better suited for the job, Knightward delights in helping where he can.

Knightward after sufficient exhaustion and injury.

Spoiler warning: Details about a player-created storyline, or information currently unrevealed about a character, follow.
Knightward was born on 8/13/1330 as Owain Gilmore. The son of the local blacksmith he was expected to pick up the trade until he was drafted into the Hundred Years War. There he served for a number of years until defending a wounded noble from eight French soldiers and defeated them all. For his heroism Owain was awarded the armor he now inhabits and leave from the military in 1350.

Owain returned home to find the local lord dead and his son, Magnus (currently known as Magnus the Risen) running the village into the ground with an iron fist. While the Black Death had already ravaged his home, Magnus's despotic governing worsened the situation considerably. Owain rallied the village and drove Magnus out. Afterward there was serious consideration of making Owain the new lord, but that was cut short when Owain was poisoned by Magnus a week after his exile. With his dying breath, Owain ran his sword through Magnus, resulting in the near-simultanious death of the two of them.

Owain Gilmore's deeds made him a folk hero of sorts, and his actions are still remembered in parts or rural England to this day. His suit of armor likewise, was a prized piece that traded hands between collectors and various museums over the centuries. At least, it was until the suit was stolen from the Paragon Museum of Human History in April of 2005.
Spoiler warning: Details about a player-created storyline, or information currently unrevealed about a character, follow.
The armor was stolen by the Circle of Thorns and brought to a cave in Perez Park. There they conducted an arcane ritual intended to allow their incorporeal allies to inhabit inanimate objects, providing an alternative to human bodies and would have allowed them to drastically bolster their ranks. However, a group of Legacy Chain members on a vacation in Paragon detected the evil magicks and intervened. The ensuing battle didn't stop the ritual, but it did botch it up. Instead of allowing spirits to be summoned into the armor, the ritual ended up summoning the spirit most associated with the armor: Owain Gilmore himself. Guided by the arcane energies of the ritual, Owain possessed his old suit. However, when he became aware of his surroundings, the battle seemed to have ended with both the Thorn and Legacy Chain members dead. Knightward is still yet to learn how and why he was summoned, only that the Circle of Thorns were involved somehow.

Owain spent several hours figuring out how to manipulate his new body. His first attempt at walking resulted in stepping out of his greaves and crashing onto the floor. Once he got the hang of his new body, Owain searched for a way out. He heard the cries of a young boy (apparently kidnapped by the Circle for human sacrifice) and freed him. Because the child was too weary to walk, and Owain didn't have the strength to hold himself together if he carried him, he was stuffed into Owain's breastplate as he wandered the cave. In his attempts to comfort and calm the child, Owain learned of the time that had passed since his death, his general geographic location, and the existence of superheroes. Once they escaped the child convinced Owain to become a superhero, and suggested he call himself "Knightward" as one's actual name "just isn't cool enough."

Spoilers end here.
Knightward has since stated in private company that, were he as savvy to the modern world then as he is now, he would have written down a different name when he registered.

Knightward often spent large amounts of time contemplating in seclusion early in his career.
Once Knightward had a basic understanding of modern life he painted himself and became a registered superhero. His early adventures were the most difficult for him as he was still woefully behind the times. His most harrowing included such things as his first encounter with an elevator, his discovery of explosives, his first time being shot at, and his first time seeing a womens' lingerie store. Knightward's technological aptitude was such that he couldn't operate a flashlight, which further led to frustrations in his early career. This alienation coupled with his inability to recall much if anything about his existence after death drove Knightward into a depression. He found solace however, when he joined The Defenders of Paragon. The supergroup lifestyle thrust considerably more social interaction on Knightward, and he learned to adapt to the modern world. He made efforts to learn modern English and began to study engineering.

Many wonder why some in the superhero community, largely within the Defenders of Paragon, insist on calling Knightward "Juicy." The origin came from an exercise in trust and teamwork among his supergroup. Members went out to the woods and practiced trust-falls. Knightward was strung along by Heather Wind and Dione into becoming a mobile cooler for their huge amount of alcohol. When he fell, Knightward accidentally detatched from his greaves, and the resulting crash shattered most of the bottles inside him, creating a large pool of "blood." Since then, many of his comrades at arms have called him Juicy. 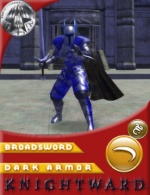 Knightward's collectable card in the "Defenders of Paragon" line continues to be a popular one among fans. 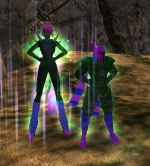 In part thanks to the extensive resources of the Defenders of Paragon, Knightward has spent a great deal of time studying physics and engineering. He has come to pride himself on his knack for acquiring and utilizing Warburg rockets. Infact, much of his technological understanding comes from studying the rockets he's gotten ahold of. According to one witness, when Knightward first controlled a heavy and took a pillbox in Recluse's Victory, despite his unchanging features he was, "grinning like a kid at Christmas."

While Knightward has overcome the depression which gripped him early on, he still has a tendancy to work on his own. He claims this is due to the risks inherent in situations he puts himself in, but gossip being what it is has led to a number of contrary rumors. There is however, no question to the fact that he puts himself in high risk situations. A fellow Defender of Paragon, Korpershutz, jokingly remarked that, "You'd think that coming back from the dead would make Juicy have no fear of death," which came as no surprise to anyone. Infact, a favorite tactic of Knightward is to fight an overwhelming group until collapsing, at which point he drains their life energy to come back and pummel them seneseless (preferably alongside his teammates at this point) while they're still dazed.

Despite his generally loner tactics, those who Knightward works closely with have attested to his intense loyalty. In his adjusting to modern life he has adapted his personal code of honor to the modern world as well. While he shows no mercy combating villains in their lairs or buildings they raid, he often goes to great lengths to ensure a relatively fair fight when encountered in less entrenched places. Likewise in the face of superpowered threats Knightward's chivilrous behavior has gone from just women to all civilians. Of course he does also slip up, as he has been known to refer to Xanatos as "his lordship," or "my liege," on more than one occassion.

Knightward certainly isn't the most popular of Paragons' heroes, but his unusual nature has led to a strong fan following. In the last two years there's been a notable increase in the number of children in the city going into fencing. But the strongest following of Knightward fans appears to be in Medieval reinactment groups. Ren Faires along the Eastern seaboard have seen more and more patrons donning blue and gray armor.