Charles Cooper was once a respected geneticist. He had a loving wife, was financially well-off, and had a good job developing crops that resist harsh conditions and yet yield a viable harvest. All this changed, however, when he learned he was sterile and could not conceive a child with his wife.

Something within the good doctor snapped and he became obsessed with his childlessness. His work deteriorated until he had to be fired. This didn't help his mental state. His marriage was strained until he was approached by a shady character about a new job. Jumping at the chance of working again, he and his wife Judy moved to Paragon City.

He did as he was told, asking no questions on exactly what it was he was doing. He had ideas, but he would rather not think about the implications. Besides, he was able to covertly do experiments on his own. Manipulation his own DNA with his wife's, he was able to create a zygote and implant his wife without her knowledge.

Judy was just happy to finally be pregnant that she couldn't even question how it had happened. Ryan was received as a miracle child by his mother. When he was born, the infant was doted over so much by his mother, that she didn't even realize how cold her husband had grown.

As Ryan grew, it was apparent that he was highly intelligent. His mother placed him in early learning programs, but the instructors kept telling her that they believed something was wrong with the child. Ryan was emotionally cold. He didn't like playing with the other children and even snubbed attention from the instructors.

As Ryan grew older, his distant attitude troubled his mother, who was now seeing a similar behavior in her husband. She got Charles to admit what he had done and Judy freaked. Judy could no longer see Ryan as her child, but as a thing her husband had created in a lab. The recent problems led her to having an affair with a neighbor. When Charles found out, Judy simply told him that their marriage was over and moved out of town with her new lover.

Ryan attended school, purposefully downplaying his intelligence so as not to garner unwanted attention. He still looked upon the other children as inferior creatures and wanted nothing to do with them. He kept to his books and such.

As Ryan grew from a child to an adolescent his feelings about those around him changed. He became lonely and sought companionship. By this time, however, his status as weird had already made him an outcast. No one else wanted anything to do with him. So he started developing habits at odds with his intellectual excellence. He stayed out late, wandering the streets without purpose.

It was on one of these late night excursions into the city that he came across some Trolls and Outcasts fighting. The Trolls came out victorious and in their frenzy decided to beat up Ryan, too. Ryan's dysfunctional emotional state lead him to form a sort of bond with those who beat him up and he began seeking out the Trolls, equating them with strength.

His grades in school fell as he came to despise his high intelligence. He started taking superadine as the Trolls came to accept his constant presence. He was well on the way of becoming one of the gang, even taking on the Troll name Krinzor. 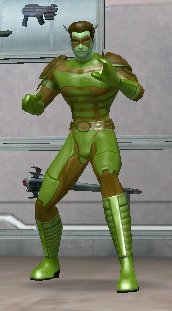 His place within the gang, however, was fragile. His father's genetic tampering caused his physical makeup to react differently to the drug. There was no dumbing-down effect and his muscle mass didn't increase quite so dramatically. Despite this, his skin still turned green and small horns protruded from his head. He was unable to fight his brothers, though, and to survive he had to rely on his genetically enhanced mind. The way he moved in combat marked him as a misfit amongst the Trolls, who desired brute strength. He knew his time was short if he stayed, so he began carving a couple of bones. At first he merely sharpened one end, but the project turned into something more. The sharpened ends became blades and the blunt ends became hilts. Krinzor crafted short swords out of the bones.

After Krinzor rebelled against his brothers' treatment, he was chased out of Troll territory and soon found himself wandering the streets. He didn't want to go home, he couldn't go back to the Trolls. He looked like a Troll so he couldn't go much anywhere without drawing attention. Despondent, he lurked in the alleys doing little more than moping around. He was generally able to fend off the denizens of the streets, or at least flee from those more dangerous.

He was found by a fellow street lurker a few months later. Several Vahzilok reapers with their cadaver servants had cornered him and he had already given up. Then a swirl of dark energy arrived and a figure materialized from within. It didn't take long before the zombies were defeated and the demonic creature turned its attention to Krinzor. After a moment of silence, the man held out his hand as an offer to help Krinzor up.

The man identified himself as Netherboy and asked if he was alright. Krinzor just shrugged. The man told Krinzor that if he needed help, it could be arranged. Even if it was just a place to stay for the night. Krinzor agreed to be taken to a safe house for abandoned superpowered children. There he found the love he hadn't known since he was a small child. Love he used to snub. After a series of psychological evaluations, he was offered a place in the United Paragon Academy, a training program affiliated with the supergroup Netherboy belonged to. There he began counseling sessions and resumed academic pursuits as well as learned to accept himself as a person and as a superhero.