Luna Praetoria was the first colony built on the moon as part of the Praetorian Extraterrestrial Advancement and Colonization Endeavor. It currently serves as PEACE headquarters and primary research and development center for its lead scientists, Archer and Helen Ellison. On January 1, 2011 it housed an estimated 1,047 scientists and laborers. Luna Praetoria is nicknamed “Gateway to the Stars” by those still on Earth. While no official government exists, the citizens of Luna Praetoria subscribe to standard Praetorian law as dictated by the Cole Administration and are organized by a council of the five most senior members of the project. 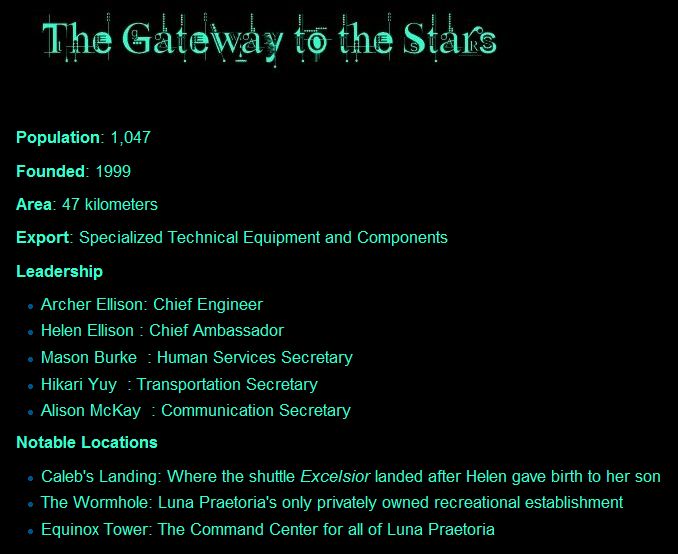 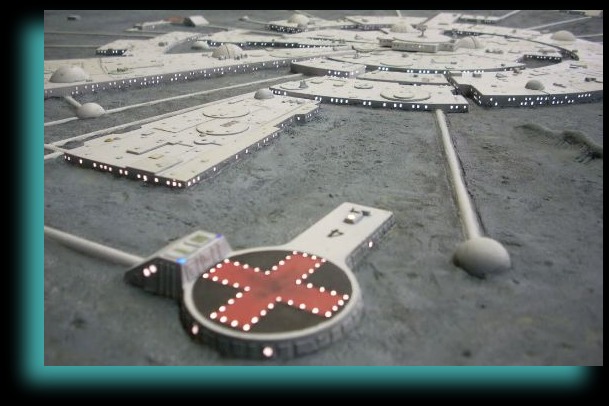 Spacial mechanic, theorist, and astrophysicist Archer Ellison married demographer and anthropologist Helen Bartlet. Both came from relatively wealthy families and enjoyed all the luxuries afforded to Loyalists of the Cole Administration in their formative years. The two spent the earliest part of their marriage teaching and researching ways to make life for Praetorian citizens richer. It was after one such collaborative study, however, that the pair came to a startling conclusion; what was left of the Earth post the Hamidon wars would be insufficient to support humanity beyond a rapidly approaching point of demarcation. They decided to turn their fields of study toward more radical means of solving the dire yet largely unaddressed problem. If Earth wasn't going to be suitable, something else would have to be. The Ellison's poured all of their finances into researching orbital habitats and even the planet Mars. It was decided after several years that the most cost effective and practical solution was to colonize the Moon. With their data collected they presented the plan to the Emperor himself who green lit the program immediately. Hopeful for the future, the Praetorian Extraterrestrial Advancement and Colonization Endeavor (PEACE) was born.

With funding flowing in from the Cole Administration PEACE began it's first massive undertaking; the construction of three shuttles capable of reaching escape velocity, landing on The Moon, and returning safely to the Earth. Archer Ellison commanded a small legion of scientists during this phase of the endeavor, working tirelessly for nearly five years, until the prototype was ready. The rarest and strongest metal known to the Praetorian people was Impervium and it was decided relatively early on that this would be the best choice for external components of the shuttles based on the stresses they would be forced to endure. After the successful launch of The Excelsior two sister shuttles, Enterprise and Columbia, were green lit to be constructed at an accelerated pace. While pilots for the shuttles were hard to come by due to the restrictions placed on publicizing PEACE by the Cole Administration, Archer persevered even going so far as to pilot Excelsior himself on several occasions. With a means to transport personnel and materials to and from the surface of the Moon the project had achieved its first major accomplishment.

Once the shuttles were running back and forth smoothly, construction began on one of if not the most ambitious Praetorian project post the defeat of the Hamidon; a city on the moon. Helen Ellison assumed charge of this phase of the endeavor though Archer continued leading a team of engineers to solve the problems she ran into early on. While rigorous and often times dangerous both enjoyed their work immensely and for the first time since the earliest days of their marriage, they felt contentment. It was during this time that Helen became pregnant with Caleb, the boy who would grow up to become Heliophysic. Over the following five years the population of the colony swelled to over 500 scientists and laborers from Nuetropolis, Imperial City, and Nova Praetoria. With so many citizens living there year round a name became necessary for the site. The name "Luna Praetoria" was chosen in a vote by an overwhelming majority. The Emperor and his Praetors found the gesture to be wholly appropriate. With the measured success of PEACE the future of lunar colonization and thus of human progeny seemed secure until the discovery of what became known as Primal Earth.

Nueron Technologies Unlimited became the central focus of the Cole Administration's scientific pursuits. With a relatively undamaged Earth ripe for conquest the prospect of colonizing the moon became considerably more daunting. The difficulties and expenses of doing so were suddenly considered "too great." It wasn't long after the first portal to Primal Earth was opened that funding from the Cole Administration all but completely evaporated, leaving the fate of Luna Praetoria in the balance. The Ellison's, well respected in the scientific community, decided that their way was the right way. Rather than return to Praetoria and live under the Dominion of the suddenly war-hungry Cole Administration, they opted to remain in Luna Praetoria in spite of the difficulties posed by dwindling funds. With a city of over a thousand scientists and laborers they continued on as leaders of their community, espousing reason and pace to the people of their former home, a message which fell on increasingly deafer ears. When their son was born, rather than keep him in Luna Praetoria they sent him back to Imperial City, entrusted to a collective of robots who were to raise him until the age of 12. With their network of satellites they are able to monitor travel all over Praetoria as well as travel back and forth from Praetoria to Primal Earth. Though the ultimate fate of the fledgling city remains to be seen what should be noted is the fierce spirit of exploration that burns deep in the hearts of Archer and Helen Ellison. 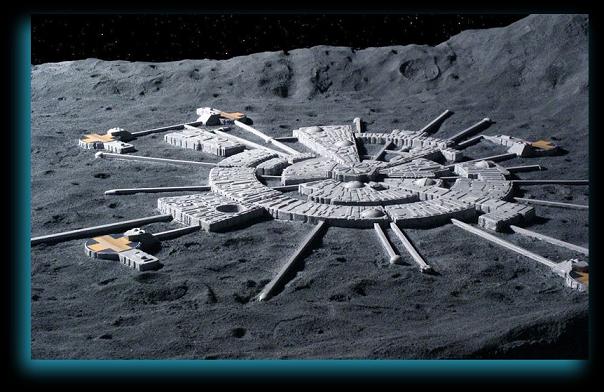