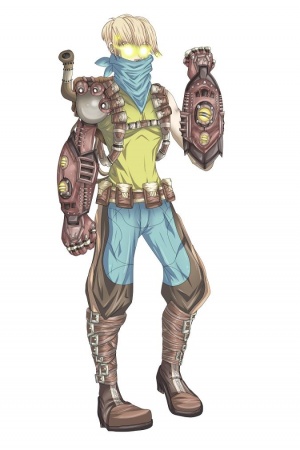 The Ellisons were pioneers of the Praetorian space exploration program known as PEACE (Praetorian Extraterrestrial Advancement and Colonization Endeavor) Creating Impervium-based space vehicles on behalf of the Cole Administration, they were the first Praetorians to leave devastated Earth behind and begin the colonization of Luna. Their son, Caleb, was the first child born in space. Wanting to spare him the rigors of life on the Moon they returned him to Praetoria to be raised by robots until the age of 12.

Caleb became a child prodigy and inventor extraordinaire. He assumed the mantle of Heliophysic upon being invited to join the Powers Division. As its youngest member ever he gained even more fame than as the unofficial mascot for PEACE. Fearing his involvement and exploitation by the Cole Administration, the Ellison's announced on TPN that Caleb was leading a team to found Rutilis Praetoria on Mars. Secretly they distpatched him to Paragon City to act as an ambassador to the peoples there.

After the destruction of his closest companions by a Rikti invasion force, Caleb returned to Luna Praetoria and invented "Helio-Tech," a means of redistributing nuclear fusion. He returned to Primal Earth to aid in the battle against the Emperor and all who threatened the ideals to which he held fast.

Friendly, energetic, and brilliant, Caleb constantly seeks new challenges. His world is a quest for truth through science and technology.

Archer and Helen Ellison were originally scientists from Imperial City. They lived affluent lives under the careful watch of the Cole Administration. Both pacifists and both pragmatists, they concluded that what remained of Earth would be insufficient to house an expanding human population after the end of the Hamidon War. Setting their sights on the Moon they began a decade long project known as The Praetorian Extraterrestrial Advancement and Colonization Endeavor (PEACE.)

Archer specialized in spacial mechanics and was in charge of a team of scientists that developed Praetoria's first space vehicles. Helen specialized in anthropology and demography, an expert in the field of creating human habitats in hostile environments. She and her team were responsible for the first city on the moon, Luna Praetoria. With three shuttles, a network of satellites and a city inhabited by 1,047 scientists and laborers after only 10 years, the endeavor was off to an auspicious start.

Funding for their project was cut, however, when The Cole Administration began pouring resources into portal technology in preparation for the war against what became known as Primal Earth. The Ellison's elected to remain in Luna Praetoria rather return home, wishing to have nothing to do with further hostilities, hoping against the odds to provide a haven for others like themselves who wished only to live a peaceful life.

Days after his birth in space, Caleb was entrusted to a collective of robots (six in total) in Imperial City. They were designed and programmed by the Ellison's to raise Caleb until the age of 12. He was educated in science and mathematics by the most advanced Artificial Intelligence ever created. With this training, in conjunction with his natural aptitudes, he constructed several devices in an attempt to follow in the footsteps of his famous parents. While his technical skill in engineering advanced the state of the art, his social skills and understanding of basic societal functions were somewhat lacking. This was primarily due to having spent his entire childhood with only machines for companionship and example. Examples of this fundamental disconnect included confusion over what constituted a machine and what was human.

Caleb was invited to join Powers Division after a TPN special showcased his first, mass produced invention, Super Gum. Though the invention itself was a failure (the gum was able to stick anything to anything else but was thusly unchewable) it was enough evidence of his creative genius to attract the attention of certain Praetors in the Cole Administration who had been watching Caleb closely since his descent from the heavens. During his time with the Powers Division Caleb was responsible for maintenance on Nueron's ever-failing Clockwork. It was simple busy work for the child prodigy and so he had plenty of time to dream up new things for the citizens of Praetoria. Because of his love of Solar sciences, influenced largely by his parents residence on the Moon, he assumed the mantle of Heliophysic.

Fearing their son's brilliance was being exploited by the Cole Administration Archer and Helen sent Caleb to Primal Earth. Their hopes were that, as a representative for the peaceful peoples of Luna Praetoria, Caleb would prove to the people he encountered that they had an ally against the Emperor. Caleb's noted absence was explained on TPN with a media charade on a scale not seen since the end of the Hamidon Wars. Heliophysic, the child avenger of Power's Division, was said to be leading a party to found Rutilis Praetoria, on Mars. Satellites were put in orbit of Earth to broadcast his exploits on Mars. The footage itself was faked using holographic technology. Though the Ellison's deplored the use of such high handed tactics, the safety of their only son was paramount and so the deception was justified in their minds by the goal.

With his Artificial Intelligences' Caleb Ellison stepped on to Primal soil with no fanfare. No camera's flashed and no people were there to yell anything let alone his name. Unfamiliar with such a lack of attention he wandered the streets of Peregrine Island, not entirely sure what to do, for hours. It was unfortunate timing as a Rikti Invasion rocked the area not long after. With their unfamiliar weaponry and strange tactics the Rikti made quick work of the young hero's robots. Their destruction brought the generally cheerful genius great sadness.

On his 13th birthday, a week later, he finally managed to sneak back into Portal Corporation. There he opened a rift and returned to Neutropolis. A shuttle quietly returned him to the moon where his disheartened parents awaited him. He vowed justice against what had happened to his closest companions and to return to Primal Earth more prepared. He spent the following three months developing what he termed “Helio-Tech.” With the surface of The Moon as his inspiration Caleb developed The S T A R S (The Solar Tactical Armament and Redistribution Suit). With specialized second-skin solar collectors, Caleb's new technology was able to harness and then utilize the devastating power of nuclear fusion. Assuming the new mantle of Heliophysic he works tirelessly in the pursuit of harmony through science and technology, hand in hand with Paragon's heroic and villainous alike. 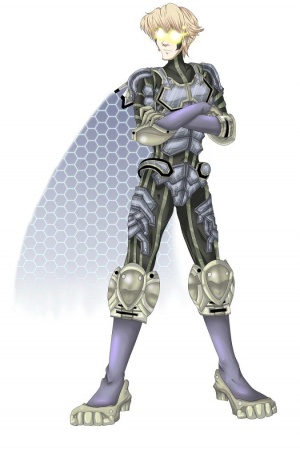 Advance agents were sent from Luna Praetoria to find potential allies for Caleb in his fight against the Emperor. It did not take them long to hear the exploits several groups of heroes. Archer and Helen sent video messages to the most elite organizations telling them of Helio's story. They applied on his behalf. Their hope for their son is that he will learn and grow from their wealth of knowledge and experience on Primal Earth. They also believe that Caleb will be an assest to the organization he will eventually join based on everything he brings to the table including not only his technical genius but his passion and dedication to always doing what is right in the name of truth and justice. While younger than most of the Sentry's membership, Caleb had proven himself to be highly adaptable and so it was their hope that in spite of his lack of social graces and human experience, that he would be accepted into their ranks and given a chance to excel.

When the original robots that guarded Caleb as a child were destroyed, the Ellison's realized their son was in more danger on Primal Earth than they had anticipated. Even with STARS they knew he would encounter foes that would prove to be a challenge if not outright impossible for him to overcome. In spite of their policy to never create weapons, they directed their researchers to come up with an Impervium-based Artificial Intelligence whose sole purpose would be to protect Caleb without wavering."She" acts as his silent companion, keeping an ever vigilant watch on him, day and night. She was programed with only one function; Caleb's preservation at any and all costs. While she maintains a constant vigil over Caleb she also keeps a close eye on his allies.

The mysterious Ashen General, the right hand of Labal, employed Caleb to construct a trans-dimensional gateway in order for the Ashen to escape to a private pocket dimension, crafted specifically for their needs. While Caleb was originally suspicious of Simi, he grew some sort of connection to her, offering his help in spite of his closer friends protest he do just the opposite. Whether or not the two were truly allies was unclear though his desire to help and to please those in need was no doubt at least somewhat taken advantage of in this particular partnership. Their collaborations to date have been limited and strictly scientific in nature. Simi was instrumental in the perfecting of DEATHS, making it possible for Caleb and his allies to detect the presence of near-by Ashen. Her motivations for freely offering said help remain unclear. 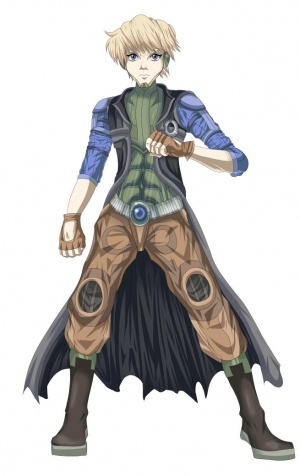 "Where are the feeding tubules... and what's this table doing here?"

-Said right before his first meal with human beings-

"I'll prove my hypothesis on Corrosive Organism Organelles from Tactile Interaction/Engagement Syndrome one day! But 'til then keep girls outta my lab! "

-Speaking to a friend about the integrity of his laboratory-

"I always tell the truth beca--- GIR, what is that smell?"

"What is out and how do you make it?"

-Confused over the term "make out" and kissing in general-

"Just 'cuz you're older doesn't mean you're smarter... It just means you're biologically deader than me."