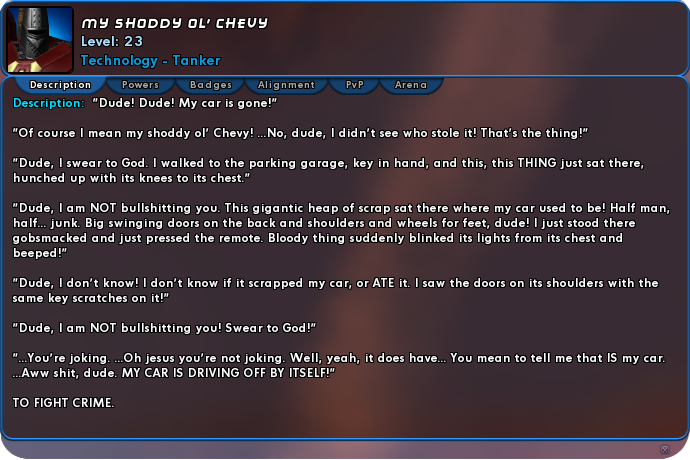 The Chevrolet Impala SS Convertible that belonged to Jonathan Hoovers had a good run. It had over twelve different owners that put their love and care in the vehicle that made up their youths, their adolescence, their early lives. It had carried pregnant mothers to the hospital, was the witness of many loving couples using the backseat for their first times together, suffered damages that would have caused a car to otherwise have been written off as a total loss before being restored...

And finally the old Chevy ended up with a typical Paragon Uni student with little money or love for that shitty old car.

But whether by chance, magic, circumstance, an act of divine will, or simply because the car was, the car suddenly was a car no more. Where it once sat as a mere four-wheeled vehicle, it suddenly sat on its haunches and its massive rubber-coated legs. And shortly after that fateful telephone exchange, where it heard the call of an elderly woman being robbed by Hellion miscreants, it ran off, never to be a mere vehicle again.

The Chevrolet, or Chevy as most people have taken to calling it, seems to be a force of nature. It 'rides' the roads of Paragon, pausing only to interrupt small crime in progress, or to divert its attention to the humans it now serves without question.

This used to be a shitty, broken, end-of-its-run '66 Chevrolet Impala Convertible. The car also used to have a small-track V8 engine block. Now, the Shoddy Ol' Chevy is a gigantic, heavy-set machine with only the faintest resemblance to the car is used to be.

It stands over eight feet tall and weighs over four thousand pounds. Its hood and front frame make up most of its torso, with its signature grill and headlights aimed to the front. An articulating, perforated air intake is often mistaken to be its 'head', though it moves its air intake often as a point of reference for people approaching the Chevy. Its doors stand on end from the sides of its body, with two large arms sprouting from its chassis that terminate in simple, oily steel mitts with thick thumbs. Its body is a haphazard mess of tubing, wiring, components and baubles, which twist and coalesque with the alluminum of its chassis in two thick, heavy legs. What used to be its wheels are now heavy-shod elephantine boots or feet of rubber that stomp heavily with its every step, and more often than not, sprockets, gears and motor oil leak from its twisted and broken shape as it goes about. It is a scratched, dented mess, and though efforts have been made by well-meaning heroes and civilians to improve its appearance (and by unruly curs smashing into the Chevy to break it), its appearance is as shoddy as it always has been.

The Chevy is a mute creature, unable to speak but in pantomime and heavy scribles. However, it seems to be an empathic machine, able to interact with people willing to put up with its own limited communicative abilities. It is a patient listener and steadfast companion to those it 'rides with', but it is also a creature easily distracted with the plight of the common man of Paragon, known to trundle and speed off to people in need. It isn't uncommon for gangbanger thugs to suddenly hear a loud, incessant honking before they are knocked to the pavement by one of the Chevy's mighty fists.

It holds no love for the usual business of the Paragon Police Department, flaunting its self-awareness and superior performance with its high-speed hurtling and parkours over the roads and highways of the city. For every good deed its seems to perform, it has a speeding ticket to its 'name' of "El Camino del Diablo".

As was last known, the Chevy stood side by side with the heroes of Paragon willing to stave off the coming conflict between Marshal Jason Blitz of Warburg and the impending nuclear threat that looms over the Rhode Island area, protesting with its fellows against the hands-off approach of the city council. It aids where it can with evacuations, but shall stand against the first strike. It will be interesting to see how well an anthropomorphic Chevrolet Impala will stand against a hurtling nuclear warhead. But, then again, the Chevy knows no fear.

The Chevy, standing with fellow heroes and civilians against the news of August 31st, 2012, that the Warburg situation escalated and that Paragon would be entirely evacuated. It led the protest with incessant honking that occasionally drowned out the cries of protest.

The Chevy is a powerhouse that either seems to ignore punishment to its frame, or it recovers almost instantly from debilitating damage. It can have its components ripped off, but they seem to either be easily attached again to its frame after a battle, or they seem to reappear on its body at any later time as if nothing had happened before. It strikes with tireless abandon at its assailants, knocking them aside with sweeping blows or kinetic backlash from a focused stomp to center mass.

The Chevy has an increased top speed of over 200 miles per hour, and can leap easily 90 feet high. Its mobility is both a boon and a bane, as the Paragon road crew is usually loathe to look after the many potholes its leaping and strides may leave in the roads and pavement of its patrols or police chases.

It has become over its time as a self-aware and sentient being a bartending affecionado with a love for good drinks and service. It has taken its time to serve man in a more literal sense in various coffee shops and even soup houses for the poor, and is even an often seen bartender at the Pocket Dimension club. Most famously, it is known for its excellent coffee, and for the flair with which it delivers the Imperial City Dominatrix, a mixed drink of Cole's Finest liquour with Doctor Pepper in even amounts, shaken on ice, finished off with a dash of grenadine juice for flavour.

For all its strengths, however, it is still a machine. Rust debilitates it until it restores itself through its nebulous recovery processes, and though it technically doesn't need oil to fuel it, its engine can still falter via pysical or mental blockade of its physical components. Drenching its engine (or worse, its spark plug) is also a sure-fire way to shut off the body of the Chevy. The mind, for as much as a machine with no actual computing components can have one, however, remains very much aware of any sabotage and vandalism to itself until it sputters back to life. And it can get angry.

A noted social weakness, of course, is that it is unable to speak. It can only vocalize itself through its engine and horn, and it certainly has no way to reach into its chassis to fiddle with the radio or CD player for appropriate songs, sound bytes or other such impromptu communications. Its pantomime has often been misinterpreted. It is also a stiffler for ettiquette when serving as a bartender, being very stern on the 'no shirt, no shoes, no service' houserule many bars tend to have (and which is a hassle in the Pocket Dimension club), as well as disallowing any 'pets' (read: therianthrope persons and animal-shaped aliens) behind the counter. It also takes unkindly to being called 'a robot' or 'a Transformer' (and don't you ever call it a Go-Bot), tapping impatiently at the chevron on its hood to assert itself as a Chevrolet. 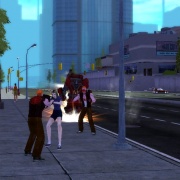 The Chevy somehow has mastered its autonomous control and motion into an elaborate means of combat beyond 'punch things hard'. Using long and elaborate swinging blows, revving up itself to its speed performance output while staying relatively stationary, the Chevy can project powerful kinetic blasts and waves that can knock people away as if they've, indeed, been hit by a freighter truck. The Chevy has mastered its output to such a degree, that it can disable and knock down non-superpowered people with relative ease without giving them more lasting harm than a hangover lasting into the next morning, or a slight concussion at worst.

The Chevy has been noted to operate much like a car proper. It can (and happily will) take diesel and gasoline to fuel itself, belching fumes from its sputtering, shaking chassis and the haphazard engine block and exhuast that protrudes from its backside. But something greater that has not been quantified or even succesfully identified seems to drive the car. If anything, it seems its own force of will fuels the car more than even Terra Volta might fuel a Paragon city block.