Neretheim most commonly appears as a wicked young man garbed in a dark, black and purple robe, with various humanoid and animal bones adorning parts of his biceps and forearms. Angel-fine, deep blue hair falls down the back of his neck, flowing freely behind him. A large, stitched scar trails from his forehead, down his left eye and cheek, halting at the left corner of his lip, and then continuing for a couple of inches past the right corner. He carries with him a certain demeanor of bitterness and despair. Despite his scarred face, Neretheim does not appear 'ugly', but actually has a certain charisma and grace about him that is not easily matched. 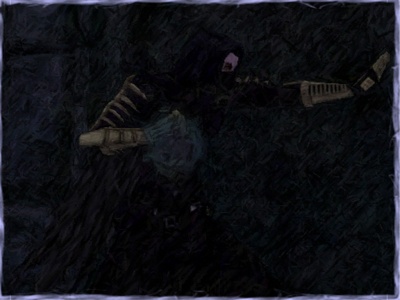 Aside from his rather menacing robes, Neretheim often wears a black, baggy longsleeved shirt with a skeletal pattern upon the torso area, as well as black mesh sleeves adorning the wrists and part of the forearms. Coupled with this, he wears a pair of baggy, studded tripp pants with a multiple chains attached to various loops in the pants. He doesn't appear much different from a typical, gothic teen while wearing this attire, and often wears the outfit while 'chilling', or simply talking a walk through the city.

Neretheim 'chilling' in an abandoned warehouse.

Neretheim is known to hold temporary truces and alliances with various villain groups and organizations.

The Circle of Thorns

Neretheim is known to on occasion, ally himself with the infamous cult known as the Circle of Thorns, likely because they share similar interests and desires. It is doubtful, however, that he and they hold any sort of longterm truce with one another, being that while not working with each other, they are often warring with each other. 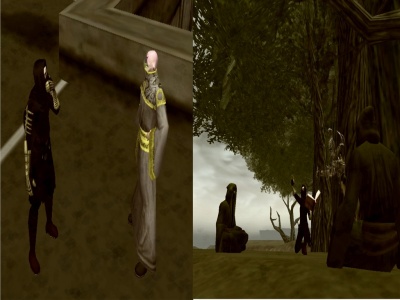 Neretheim consults with Diviner Maros of the Circle of Thorns, and partakes in the research of power with their cultists.

Though not an official operative, Neretheim also often finds himself doing various freelancer work for Arachnos, although his intentions for such acts are unknown. It is thought that in return for his services to Arachnos, Neretheim is cleared of any 'negative attention' that has been brought upon him, more specifically, bounties in the Rogue Isles. Another rumor is that he is rewarded with powerful and mystical Mu artifacts.

Aside from the few individuals that he is known to have disputes with, Neretheim is thought to have a negative disposition with various organizations.

The Freedom Phalanx, Longbow, and the PPD

Neretheim often finds himself in Paragon City, where his 'evil' presence is not tolerated by the city officials or the various superpowered and otherwise 'normal' law enforcement agents. It seems as though whenever he is in Paragon, it is always to cause trouble, whether it is stealing corpses from cemeteries, robbing museums for various mystical artifacts, or other villainous acts. As one can imagine, this does not make him very popular, and he is to be apprehended on sight by the law enforcement officers.

The Rikti seek to destroy magic, and the essence of magic, and thus render those that use it, the denizens of Earth, powerless. The Rikti believe that their own technology should be the only source of power. One could only imagine how this would interfere with Neretheim's plans, being a Necromancer entirely dependent on magical, nether-energies. He has made it a personal goal to dispose of any Rikti forces that he comes across.

Although remaining polite in all but dire circumstances, Neretheim houses a certain spite, even contempt for most all other sentient, living beings. He is more often to hide such feelings rather than display them publicly, obvious reasons being negative attention and ill will towards him. Despite maintaining a great composure, there have been limited occasions when Neretheim loses his emotional restraint. Aside from the bitterness towards others deep within him, Neretheim is quite a charming and polite young man, referring to others with a title such as "Sir" or "M'lady", as well as offering a whole-hearted bow in most greetings.

Neretheim is always looking to further his own knowledge and power. His own lust for power is so great, that he puts himself and his wicked desires before all else. If he felt that hurting, or even killing another person, or even an ally, would help him achieve his goals, or even if someone persuaded him that eating dirt would somehow grant him access to greater power, there is no doubt that he would do such.

Neretheim is a necromancer, and a very powerful one at that. Aside from his mastery over Undeath and the Undead that serve him, he is capable of channeling and manipulating negative energy for his own purpose. Such common forms of negative energy manipulation include firing blasts of dark, wretched energy, forming veils and barriers of shadows around himself to absorb incoming attacks, and creating abyssal chains and shackles to bind his foes. Other than using the darkness as attacks, shields, and bindings, Neretheim is also known to create extradimensional rifts, 'voids' in time and space, pocket abysses consisting of only blackness. He uses these voids for various purposes, including storage of equipment and goods, prisons for captured foes, and for his own transportation.

This necromantic, fully-functioning musical instrument resembles a small lyre or harp, elegantly crafted from white bone. To a mortal man, the music played from the Bone Lyre may sound mournful, wretched, depressing, and sour, although it is known to enthrall and charm Undead and Fiendish outsiders from the Lower Planes that hear its bitter-sweet song.

The blade of this ritual dagger seems to glow red with Infernal energies. It easily slices through flesh and bone as if it were butter. The Infernal Carving Knife is particularly effective against Undead, prying away part of their soul energy in the process and feeding the blade itself. For this, the weapon is known and feared by many Undead.

Despite the negative opinions of others, Neretheim claims that his acts are more of an artform than a vile and corrupt force. He states that Necromancy is simply a school of magic, much like Evocation, Illusion, or Conjuration. True as this may be, the acts that he commits in his so-called artform are particularly heinous, and because of such, he is actively hunted and prosecuted by various religious groups, such as the Legacy Chain.

One may notice a slightly discolored blotch of skin on Neretheim's neck. To most, it would appear to be nothing more than a natural mark, or maybe even a small swelling or sore, but its true nature is far more sinister. The origin of the mark is actually an internal cyst of undead flesh tissue. Those who have an supernatural ability to detect undead entities may find it a bit unusual that such a dimimutive form of undead creature exists, and perhaps even more unusual that it is a part of this living man. 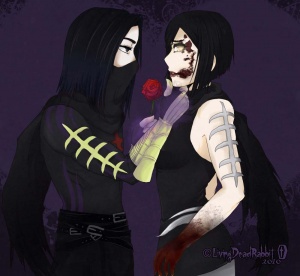 Kijuk is one of the few people that Neretheim seems to have a semblance of trust, affection, and perhaps even some other emotions for. When he had stumbled upon Kijuk, she was little more than a lost, wretched soul with a certain paranoia of a few certain people. What may have originally caught his attention, however, was the fact that Kijuk was a Revenant of sorts, an intelligent Zombie that had retained its sentience in its ascension to Undeath. Neretheim offered to Kijuk an alliance, protection from those she feared, and a place to stay, which she had accepted. Over time, it seems as though Neretheim and Kijuk have developed strong, mutual feelings of affection for one another, something that he had not experienced in a very long time, if not ever. Neretheim is content with this for now. 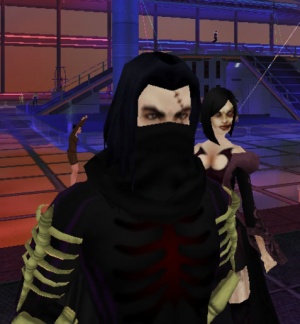