The Warshade Nocturne XIII is a former secret agent who bonded with a renegade Kheldian while under a deep cover mission working against Malta and the Council.

Paladins of the Night; Federal Bureau of Super-Powered Affairs (formerly)

Nocturne XIII posseses powers typical of a Kheldian capable of shifting into both the Dark Nova and Black Dwarf form. Approximately 40% of his training efforts have gone into perfecting the Nova Form, and 50% into strengthening the human form. He has only put cursory effort into increasing his abilities with the Black Dwarf form.

Nocturne XIII is a former espionage agent working with Crimson and Indigo, primarily investigating the Malta Group in a deep cover assignment. While investigating a Council base alleged to be doing Nictus research under the direction of Arakhn, the Malta forces were lured into a deadly trap. They encountered much heavier Council forces than expected, including a Shadow Cyst Crystal, Dark Archons, and prototype Warcry mechs. The council was interested in brainwashing the Malta forces and making them a new elite cadre of Void Stalker. The renegade Nictus who eventually bonded with agent Nocturne had emerged from that cyst crystal when the Malta squad encountered it. He hid away after draining his fallen companions' energies, intent on sustaining himself unbound for quite some time. "Nightsong" had been working with Nightstar in sending repentent Nictuses to Earth to become Warshades for some time, but his identity as a spy among the Nictuses was close to being revealed. Sensing it was time to move, he travelled to Earth with the intent to join the front lines.

When Nocturne XIII was injured by a Council Dark Equinox Archon, he attempted to retreat from the center of the battle using his Gunslinger's teleportation gear, but failed to get very far away. By chance, he encountered the renegade Kheldian, and after a tense encounter, the two bonded. Nocturne's revival as a Warshade turned the tide against the Council and he was able to withdraw his squad. Crimson and Indigo extracted him from his assignment by "capturing" him and his Malta companions as they exited the base. Now, he is working with the Kheldian forces on Earth to combat the Nictus's plans. While he remains on good terms with Nightstar, Indigo has distanced herself from him at this time, claiming that the Federal Bureau of Super-Powered Affairs doesn't currently have any appropriate missions for him. When he encountered the Paladins of the Night, Nocturne XIII knew that he'd get along well with the maverick mystics, and became one of the first warshades to join the group. The Paladins' mystic background provides him with needed support when dealing with magical threats.

Recently, Nocturne XIII has gained a great deal of confidence in his abilities as a Warshade, enough to feel comfortable in occasionally putting on his gunslinger hat (because the hat's just that cool; plus the stealth clothing is handy in some environments). Additionally, he's recently clashed with his professional and name rival, Nightwidow Nocturne. (Each of them considers themselves to be "the real" agent Nocturne, and they have a bitter rivalry.) In his spare time, he moonlights as an electronic musician, as the Kheldian NightSong was a professional recording artist before becoming a Nictus.

Nocturne XIII stands approximately 6'6" tall, with a lean, muscular physique. He has short-cropped black hair, and mildly luminous eyes (possibly the result of Kheldian energy leaking through eyes slightly damaged by Malta stealth technology). He usually wears a basic tac-ops bodysuit, but occasionally may put on some of his Gunslinger gear when he's feeling particularly cocky. Out of consideration of easily frightened lower security level heroes, he does not run around in an outfit that completely matches that of Malta Gunslingers. 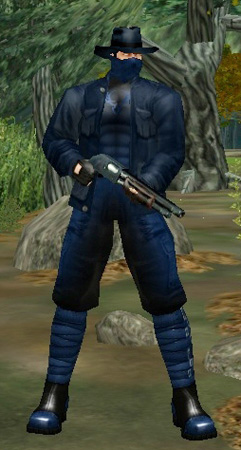 Nocturne XIII is a good example of a concept that started small and really grew. When I created the character I had the name pop into my head and I knew that I wanted him to be some kind of an ex-spy, probably investigating Council somehow. It was pretty easy to make his first costume, which is what I think of as his general tac-ops bodysuit. After playing him a while, the Dark Nova form graphic glitch was introduced into the game, and I realized that whenever I used the cone blast, a gun was appearing in his hands. I didn't know what that model was for a while, but I dug around and found out it was a Malta Gunslinger Rifle. That gave me an "ORLY?" moment and after a little research Malta just added itself in and fleshed out the origin.