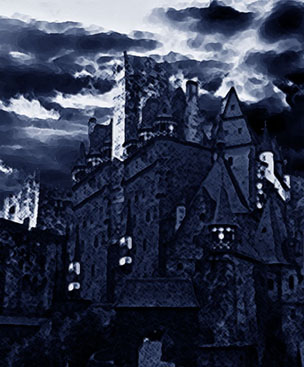 Details about Nox, the home dimension of Sable Thirteen, Raven Nightstrong., and other Netherlings are presently under compilation.

Most of the references on Nox that still exist are currently believed to be in the possession of members of The Midnight Squad, The Circle of Thorns, and various private collectors.

What can be gathered about the dimension of Nox is that it is a realm of both science and magik, both of which have vast differences, as well as similarities to this world.

Some general facts about Nox are listed below.

1. Natives to the dimension of Nox are called Netherlings. There are other species who have sought refuge there over the years, but there is little documented information about them.

2. The dimension of Nox apparently has only one planet capable of sustaining life. There are vague references to a universal cataclysm that has either destroyed or rendered the rest of the universe of Nox uninhabitable. When someone says they are from Nox, it is understood that they are all from the same planet.

3. Nox is a realm existing mostly in darkness. The sun that Nox revolves around is strong enough to sustain life on her planet, but no more. The brightest it ever gets on Nox is twilight. The only reason that life still exists there is due to various advanced technologies and magiks.

4. The walls between this dimension and that of Nox appear to be easier to pierce through the null-space realm known as Pocket D. It is unknown if there is in actuality a fixed rift or multi-spatial wormhole that exists within Pocket D, that allows easier access to Nox and other dimensions, or if the dimensional barriers are really "thinner" there, as termed by dimension jumpers and magik users.

5. Nox does not have countries, like that of Earth, but instead their lands are separated into what are known as "Houses". Raven and Sable are from the lands known as the House of Silence, ruled over by the Circle of Dark Elders.

6. Recently, Raven discovered that Sable had left an instable tear in the fabric of reality when shunting through dimensions. Raven used what Sable had left and built upon it. Closing off a small portion of her estate in Nox, she erected massive sealing wards and through vast preparation and ritual incantation, shifted the reality phasing of what was contained inside. When asked about the process she described this as "Blowing up a magic bubble, then taking out what's inside, but leaving the bubble where it's at."

This left her the sealed pocket of space she desired; not truly in Nox, but not existing outside of it either. Raven then used her knowledge of magikal and spatial relations to attune the interior of her bubble dimension to the rift that Sable had created, and with binding and holding spells created a permanent doorway into the bubble for herself and those she allows access.

7. Individuals from Nox refer to Circle of Thorns magik as "Dirt Magik" and apparently look on it with great disdain. It is unclear whether it is because they disapprove of the way The CoT use their magiks, or if they feel that the magiks learned in Nox are somehow more pure. It should be noted that other forms of magik are not usually referred to by those from Nox with such distaste.