In the Rogue Isles, No one can hear you Scream...

Project Splice is a creepy, childlike monster that inhabits the Rogue Isles and is owned and employed by Lord Recluse and his organization Arachnos. The creature itself is friendly when not hungry or working, and often watches others form its camouflage. He often spends time in Cap Au Diable, watching and interacting with some. Splice is not to be taken lightly though. He is severely dangerous and labeled by the American Government and Longbow as a Global Threat to the safety of Mankind.

Project Report: Commander Samuel McKnight- The year is 2002, and I've been assigned to oversee the work here in Indonesia. The Tsunami was quite devastating, and has managed to destroy most of the coast. My troops had begun to pass out the supplies we'd brought as relief for the Sumatrin people, when a Lieutenant brought a corpse to my attention. Apparently Tsunamis have a habit of bringing up unknown species from the ocean depths to the surface, but this find is beyond reproach. This is a corpse that looks ancient, and is as my resident Scientist Professor *Deleted* has informed me. Apparently this creature was both reptilian and icthian in nature, and has Regenerative capabilities at least 100 years ahead of any country. Its completely dead, but its body refuses to admit it, i watch as tissues grow and serve no purpose. The corpse was quickly contained and moved to Area 42 for study...*multiple deleted articles* Resuming. Its been 2 years since we discovered the source for Project Splice, and so far the results are promising. We went ahead with phase one, and have combined the DNA of the Unknown Species with a Male child, and he has taken well to the procedure, aging from just a few months old to the equivilent of 5 withing days. The regeneration powers seem to speed and strength development. As he continues to develop, and go into training, ive begun to refer to myself as Uncle Sam to little Splice, love is the greatest loyalty. I end this report with this, We have created the ultimate weapon with this creatures DNA. Splice is a creature of pure military training, that will never die...*Report lost*

Report to Recluse of Threat's Powers

My Lord Recluse, as requested, the released creature known only as Project Splice has been tested and surveyed for your knowledge. He was quite willing I might add, seeming to behave as Ive only a child.. Report on Splices Powers: Instantaneous Cellular Regeneration and Manipulation- This power seems to be an incredibly super charged metabolic healing factor on the cellular level. Splice is able to recover from woulds literally WHILE they are being inflicted. Whenever damage is done to any portion of his body, the cells become super active and begin to heal at an alarming rate. As far as we can tell, no form of known force to his body would result in permanent damage or death, as the cells quickly react and adapt and fix the damage. While he doesn't seem to be resistant or impervious to any outside forces, he instead simply heals whatever is done to him, making him the ultimate expendable soldier. A suicide mission would be impossible for Splice, as he couldn't die, making him a very valuable soldier and specimen. This primary power also seems to offer the subject other abilities. His reptilian skin is filled with cells similar to the Chromatophores located in Cepholapods, but more powerful. These cells can be used to mimic his surrounding environment and even "bend" light, allowing Splice to completely vanish from all forms of non magical detection. He generates no heat signature, or even an electrical signature while camouflaged. This makes him an impossibly powerful assassin. He also possesses modified bone structures in his arms, giving him deadly sharp claws that can even damage titanium-impervium corrupted alloys. So far, only Proto-Steel and Refined Impervium seem to resist his claws. Finally, it seems Splice's muscles are severely overpowered by his regeneration, allowing him to operate at impossible speeds, and never tire. This report concludes, Project Splice is an incredibly dangerous but controllable Stalker. 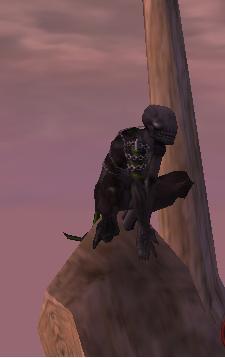 Currently, Splice is an evolving organism, and his physical state is light years ahead of his mental one. Splice behaves much like a child would, often without thought about consequences, or without forethought. Contrary to his mental state though is his cunning and murderous talent for stalking. He is the perfect predator, but a highly defect person. He spends much of his time, going from job to job, lead on by Arachnos with no idea how his lifestyle is affecting him as he cannot quite comprehend what he is. He loves murder, but has no clue to the moral implications behind it. His brutal predatory lifestyle has attracted Captain Mako's attention, and currently Splice has been taken on as one of Mako's personal apprentices. This bodes not well for the Heroes of the world, as Mako despises them, and Splice sees Super humans as his favorite food source. And it seems this contact with Mako is having an effect on Splice, furthering his evolution away from a pure predator into something even more sinister, a Predatory Mass Murderer. A few records from lucky Heroes and Longbow Agents report seeing a larger, darker, more conniving and more evil form of Splice in the field, who has Eyes on his hands, so he can see his prey's last moments first hand...

As a lot of people can see, Splice's biggest influence was the Alien from Alien,Aliens,AVP and so on. I based the character design a lot on the alien, even taking the characteristic of not having eyes to further his alien visage. His powers are based sort of on the Predator though, using hand to hand to rend his prey to death, while being able to recover from any wound. His mindset is unique, and I sort of developed the whole Child murderer made by the government from a lot of different Sci Fi movies i've seen in my lifetime.