Redoubt is a taskforce under the authority of the United Nations. It’s main purpose is as an experiment with an irregular force of robotic for the completion of various tasks. Founded on March 20th, 2003 the group was created in it’s current incarnation to determine the feasibility of a robotic force to assist Vanguard and deal with the rising threat level in the world today. Rather than integrate the robotic soldiers with an existing unit the new unit was created avoid tensions with flesh and blood operatives until public opinion is more favorable, and also to allow easily dismantling of the unit should the venture prove unsuccessful.

The name of the organization, Redoubt, is an acronym which stands for

Redoubt mimics the military structure of the United Nations peacekeeping forces with the express difference that Redoubt soldiers are UN employed rather than on loan from various member nations. Like it’s name suggests Redoubt is a battalion sized military unit which consists of five companies with a total troop strength of about 1000 soldiers. Redoubt is lead by Lieutenant Colonel Gilgamesh and is based in their headquarters named Redoubt One.

Rather than build most of the personnel for Redoubt itself, the UN recruits members from the population of it's member nations. This is done so the UN does not associate itself with the rather ghoulish image of making an army of robotic soldiers bent on world domination. Of the personnel that have been recruited to Redoubt, about one third are were previously freelance heros or constructed to assist heros. The second third are robots or androids that were build for civilian applications which for various reasons have enlisted into the organization. These can range from free robots that feel the need to enlist, those have been dismissed because their previous roles are no longer required, or those who have escaped from their previous owners, nefarious or otherwise. The final third are robots built specifically for service into Redoubt by private organizations. These typically come from companies that are looking to expand their public notoriety by supplying the UN with a new enlistee. These are typically built to fulfill UN requests for new personnel to fit a particular role. Recruits currently comprise 95% of Redoubt personnel. The other 5% are the initial batch constructed by the UN to fulfill specific roles in the group when it was created. Most of these are administrative or leaders of particular divisions. 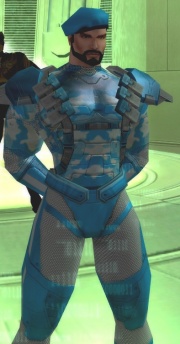 Gilgamesh is the first replicant built by the United Nations for Redoubt. Gilgamesh was specifically constructed and trained to be the commander of Redoubt. Of all the various shapes, sizes, and types of soldiers Gilgamesh is the one that most resembles the conventional peacekeeper forces that came before him, and he is clearly decked out in the classic UN blue peacekeeper uniform. More about Gilgamesh can be found in the subarticle on him.

The Five Companies of Redoubt

Redoubt is separated into five different companies. Each of the companies specializes in a particular role that Redoubt needs to have filled. Each company is lead by a Major and each company consists of several platoons.

The infantry company consists of soldiers that are optimized for land-based combat. Typically soldiers in this company are equipped with heavier armor than other units or built to run at faster speeds than other units depending on the specific needs required by their platoon. Infantry soldiers tend to be more heavily armed than comparable configurations in the Aquatic and Aerial companies. The infantry company of Redoubt is the only portion of Redoubt that possess artillery units.

The Naval company specializes with units that can specialize in aquatic combat or landings. Most of the soldiers in this division have the capability to travel underwater for long periods of time, make landfall on a beach, and then hold the beach or continue inland if needed, all without the need for landing craft. The few ships that Redoubt has allocated to it would be manned by such soldiers. Because of this the company frequently fills in the role of marines or reinforcements for the Infantry company when more land-based units are need in addition to strict naval roles.

The Aerial company of redoubt specializes in units with flight capability. All of the soldiers in this division have flight capability to some extent or another, negating the need for aircraft for flight. Soldiers in the aerial company tend to be the lightest armored and the least armed compared to the other companies in Redoubt. Of all the companies these are the ones least exposed to public attention. Aerial company soldiers typically provide support to the other companies depending on the task required.

Redoubt typically focuses on peacekeeping missions and the apprehension of terrorist and super-human threats with a specialization for dealing with the misuse of robotics and cybernetics. Being an extra-national group they’re ideally suited to dealing with super villain threats as these usually spread across national borders. This means Redoubt operatives may find themselves acting in roles from a swat team, a special operations strike team, or a conventional military presence. Since developed nations typically have little use for UN peacekeepers their actions working with local law enforcement tends to have more of an impact of the public’s impression of the unit. To this end Redoubt typically makes it a point to establish at least a few operatives in major cities on a regular basis to capitalize on this. Since the amount of soldiers Redoubt can leave stationed in these cities is small Redoubt operatives are encouraged and usually required to work with local heroes in the area in the execution of their work. The purpose of this is to help paint Redoubt operatives, and by extension robots in general, in a favorable light, to help foster favorable contacts with the super hero community, and lastly to report information back to the United Nations Special Council on Super Human Activities.

The headquarters of Redoubt is called Redoubt One. Not wanting to create a new military force based within a member country the United Nations has placed the headquarters of Redoubt in international waters in the middle of the North Atlantic Ocean. Redoubt One is a massive pentagonal artificial island which stays stationary at the surface of the sea. The base is mostly a metallic silver, reflecting sunlight making it visible from miles away. The island is built with high walls with only one entrance into the base from each wall. From these entrances there are layered hallways that go further into the interior of the island. The island provides all the requirements of redoubt, and includes repair bays, communications facilities, conference rooms, press rooms, vehicle bays, offices, and other functions.

In addition to Redoubt One there are other based placed at various locations around the globe. Most of these bases are smalled and provided by member countries for Redoubt's use. Redoubt typically names each of these bases by naming the bases function and giving it a number. Ex: Depot 73, Airstrip 32.

This group is featured as a part of the below arcs. Remember that Mission Arc articles may contain spoilers. For articles with story information but not spoilers look for articles listed under Related Articles.

The Redoubt enemy group focuses more on standard offense and personal defense for each individual on the field. While no enemy in the group focuses on debuffs, like the Imperium, they have do have two soldiers which assist their allies. The Medic is a minion type which has healing aura that will also use gravity control abilities in combat. And the Aegis, the boss minion, has the grant cover ability. The Medic is the only soldier in the group which does not have a defensive powerset associated with it. Of particular note is the Coordinator, a lieutenant which robotics as it's primary. It may be advantageous to eliminate these early on in encounters before they can get their robots ready to attack.

Description: The backbone of the all robotic Redoubt forces are either built by the United Nations, contributing manufacturers, or enlisted civilian types. Redoubt assists these green troops by using a model of powered armor similar in model to those used by Vanguard. Marksman make up the bulk of the Redoubt forces. They provide versatility of combat ability that makes them a staple of any modern military force. To assist them Marksmen have their powered armor fitted with enhanced optics suits, allowing them track targets farther away and display targeting information from their scopes right on their internal visor display.

Description: The backbone of the all robotic Redoubt forces are either built by the United Nations, contributing manufacturers, or enlisted civilian types. Redoubt assists these green troops by using a model of powered armor similar in model to those used by Vanguard. Pugilists are those Redoubt soldiers who excel in martial arts and other hand to hand combat. To augment their combat ability their powered armor suits are fitted with increased strength and energy emitters in each hand and field emitters placed at strategic points throughout the armor.

Description: The backbone of the all robotic Redoubt forces are either built by the United Nations, contributing manufacturers, or enlisted civilian types. Redoubt assists these green troops by using a model of powered armor similar in model to those used by Vanguard. Medics are an invaluable resource for Redoubt, allowing each of their units to stay in the field for longer periods and keeping their personnel safe to gain experience and rise through the ranks. Medics in Redoubt are fitted with powered armor that has gravity manipulators paired with nanomachine dispensers. This allows Medics to propel nanites quickly to where they're needed to repair fellow soldiers, and heal hurt civilians alike. In addition these can be used to pick up and hurl objects and is an invaluable ability for digging people out of rubble after a disaster.

Description: Compared to other military organizations the number of troops is relatively small. In an attempt to compensate for this Redoubt employs various types of drones for different roles. While all members of redoubt are full artificial lifeforms with complete intelligence, drones have no such intelligence or versatility. Coordinators instead control the drones by sending commands through transmitter modules connected to their central processing networks, without which the drones are inert.

When not in battlefield coordinators also serve as communications officers and support officers for units deployed in the field thanks to their enhanced communications suite.

Description: The Duelist is close quarters combat specialist among the soldiers of Redoubt. Equipped with a talsorian katana and heavy nanite dispensers Duelists cut down their enemies while repairing their armor and themselves.

Description: Aegis are Redoubt troops built to outlast the enemy and ensure squads with them do as well. Equipped with the heaviest impervium powered armor designed by the UN the Aegis compliments this armor with a large talsorian shield and a charged war mace to disable and destroy foes.

Description: Lieutenant Commander Gilgamesh is the leader of the Robotic Extradition and Defense Operational United Nations Battalion Taskforce more commonly known as Redoubt. A Replicant built by the United Nations, he has come to embody all the ideals they stand for. A close friend of UN Secretary-General Elizabeth Choi, Gilgamesh has become the public face of Redoubt to the world. When in battle Gilgamesh relies on his electromagnetically charged armor and his specially modified rifle Enkidu.

Timeline - A timeline of events which includes Redoubt activities.

Replicant - Information or replicants, a type of robot which comprises are large number of Redoubt's personnel.