Kalago is a small country in southern Africa. The country is landlocked but is bordered by the large inland Kbamba Bay on it's eastern border. Ever since it gained it's independence from the United Kingdom on July 6, 1964 it has had a steadily increasing quality of life and increased stability despite ethnic tensions that at first threatened to split the country in two. However all that peace and stability rapidly changed when the discovery of what should have been a boon lead to a time of strife for the small nation. 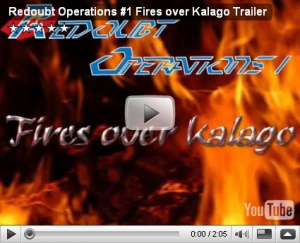 The trouble in Kalago started with the discovery of impervium[1] deposits near the city of Shantyre on March 5, 2007. The news was greeted with celebration in many quarters of the country as the mining of the impervium would provide a new source of income for the country. However not everyone greeted this news with joy. A faction of dissidents saw the wealth the impervium provided as an opportunity to break away from greater Kalago. What began as a movement of dissent become the organized Sepratist faction lead by Gituku Youssouf by June 12. By September 20 the first armed standoff between the Kalagonian government and the Sepratists had occured, forcing mining surveys or flee the area.

With tensions continuing to increase and local officials unable to resolve this issue the Kalagonian government requested assistance from the United Nations on March 20, 2008, hoping their aid would put an onus on the Sepratists to come to a peaceful solution. The United Nations sent in Redoubt in an attempt to return stability to the country. While Redoubt's presence did reduce the number of armed confrontations between the Kalagonian government and the Sepratists the progress of the diplomatic front was minimal with no agreement the Kalagonian government could make seeming to appease the Sepratists. On June 12, 2009 Youssouf contacted Sky Raider officials for assistance. Youssouf offered the Sky Raiders a portion of the impervium if they assisted the Seprtatists in a coup to take over the country. Soon the plan was enacted and on March 23, 2009 Sky Raiders initiated an attack more daring than Redoubt anticipated. Sneaking into Lilongsa in the dead of night they ambushed the Prime Minister, Sizwe, in his home and spirited him away to a cargo ship in Kbamba Bay.

For Redoubt a tense but stable situation has suddenly become critical. The Prime Minister has been kidnapped, a known infamous criminal mercenary has become involved, and the entire nation seems to be careening toward chaos. Faced with these difficulties Redoubt puts out the call to the brave heroes of the world to come to Kalago and help restore tranquility to the besieged nation.

What neither Redoubt, nor the heroes they've sent know is that the chaos in Kalago has attracted the attention of the Mechanius Imperium. The Imperium's secret base Vigrior is hidden deep in the jungles of the Congo. The Imperium has been working in the region for the some time, causing nations to destabalize, extracting resources, and working to setup puppet government for unlucky nations there. With Kalago teetering on the brink the nation is to rich a prize for the Imperium to pass up. Knowing that Redoubt has better access to tracking technology then they do they send their infiltrator Spectre to disguise himself and follow Redoubt to the Prime Minister's location. Once Spectre has the location of the Prime Minister he is to eliminate the Redoubt and Sky Raider opposition. Once that is done Spectre can use his solid hologram system to masquerade as the Prime Minister and then either hand the real Prime Minister over to an extraction team, or kill him. Luckily for Prime Minister Sizwe, a group of Paragon's best and brightest is there as well to stop Spectre's plan in it's tracks.

Timeline - A timeline of events which includes events in Kalago

Redoubt - Article with the description of Redoubt

Redoubt Operations #1: Fires over Kalago Feedback - The information and feedback thread on the mission arc available in the City of Heroes Architect.