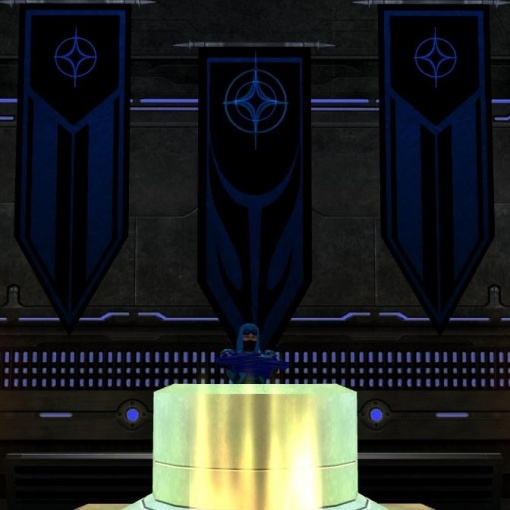 Refuge was a villain group headed up by Iceciro, Zefnex Bellarus, and Satyana. Primarily founded to serve as a new home for the group after the original base of Seekers of The Void was attacked by a demon, Refuge was extended into becoming a machination primarily to support Iceciro's own plans for evil.

Refuge, like Iceciro, was believed to be defunct, but recent activity of the Swatbots, Refuge's mass-produced robotic soldiers, may prove differently.

If Iceciro has returned, much of this information may be currently incorrect.

Refuge is a place for villains who cannot find a home anywhere else, for those whom a shelter from Longbow and perhaps the other villains they've wronged would otherwise be a dream. Refuge is a place for camaraderie even on the wrong side of what most would call morality. A place where a desperate villain can find backup, and a place to call home, even if just for long enough to dodge the people who may want him dead. The leaders of Refuge, on occasion, personally bring contingents to extract members from jails. Refuge exists to give its members a better chance against the ever-encroaching legions of so-called "heroes" who would seek to stop them from using their powers to secure the future they want, who would inflict their cancerous morality upon everyone instead of allowing the strong to rise. The leader of the group, Iceciro, used his position as an Arachnos Arbiter to provide further protection, until blatantly renouncing it and directly assaulting Lord Recluse.

Refuge is a small organization headed by the ex-Arbiter Iceciro, and those affiliated with it are as marked as he is.

The membership of Refuge was composed of three different groups that interconnect: the Non-Contributors, the Upperclass, and the Inner Circle. The Inner Circle are members of Refuge who work directly with the Keepers, overtly to keep the Refuge safe, but in fact for more nefarious reasons.

Non-Contributors, or NCs, are villains who have joined Refuge recently, or have been in Refuge for a long time and are not deserving of any further honors or responsibilities due to insanity, incompetence, uselessness, or untrustworthiness. NCs have the smallest rooms and receive less trust from the Upperclass in most cases. Many NCs who Iceciro finds no particular use for find themselves drawn into the ranks of the Wolf Spiders, and move away from Refuge - as such, the NC dorms are in a constant state of change.

The Upperclass, or UC, begins with Officiates, who are basically NCs who have proven their worth to Refuge and the Keepers, as well as a willingness to defend not only themselves, but the other members of the group. It is also important that they are found to be trustworthy enough.

Paramounts, the next class, are those who have shown exemplary status in defending other Refugees, either through armed combat, information gathering, or even simple dedication to keeping the secrets and keeping Refuge running. Paramounts have larger rooms, are considered permanent members of Refuge, and are respected by even those who rank higher than them for these reasons.

Guardians are drawn directly from the Paramounts in most cases, and are generally only those who the Keepers and Iceciro in particular find trustworthy or controlled enough to be a part of his actual plan. The title, however, is a misnomer; Guardians do not work in the interests of Refuge as a home for villains with no other options. Each Guardian works directly for Iceciro and the other Keepers in furthering his plan. Guardians are often sent out on missions of subterfuge and kidnapping, and occasionally break other villains out of jail in order to direct them to Iceciro. All Guardians are either considered trustworthy enough to no longer be a risk, or controlled enough that they would risk death or a similar fate to go against Iceciro. The ranks of the Guardians and above have so far had no infiltrations, though rumor has it that a few Guardians have been killed by Iceciro to maintain this status.

The Keepers are the final tier. The term is a holdover from their old group, Seekers of the Void. All Keepers are addressed much as Arbiters are within Arachnos: Keeper Iceciro, Keeper Satyana, Keeper Zefnex. The Keepers are generally not only fanatically loyal, but friends and accomplices to Iceciro. Keepers are those entrusted to keep Refuge secret, and what keep Iceciro's plan for domination slowly marching forward. Keepers are rare but extremely powerful within Refuge.

If it breathes, moves, or thinks within the Isles, Iceciro is aware of it.

Madman, monster. The unquestioned leader of Refuge, Iceciro is a brilliant inventor and veritable evil genius. What he lacks in physical strength he makes up for with his staggering intellect and incredible cruelty. Known to make allies of the most unlikely and unsavory people, Iceciro has a hand in the goings-on of almost every event on the Rogue Isles.

Zefnex prepares the summoning beacon in his body armor to return him to The Refuge.

Furious, sadistic. A quick-tempered brawler from Long Island, New York, Zefnex Bellarus is a surprisingly well rounded individual. Having briefly studied or engaged in a wide variety of topics from acting to volunteer firefighting, he prides himself on his wide array of knowledge and talents. His zealous dedication to his body, almost superhuman fits of rage, and ability to strike utterly without mercy or remorse have accelerated him to the top echelon of Refuge. 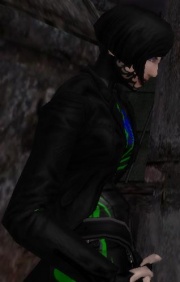 A former Commissar within the 5th Column, her work benefits Refuge from behind the scenes.

Enigmatic, mysterious. Little and less is known about Satyana, easily the most powerful woman in Refuge by status and ability. Seldom seen and even less often heard, many of her efforts are kept all to herself. Though she obviously prefers to work alone, Satyana has joined field operations from time to time.