What began as a genetics project within the 5th Column spawned a growing scientific collective now calling themselves The Siren Chorus. The mysterious enclave seems inscrutable to outsiders, where faceless cloned agents called 'Blanks' speak with an odd cadence. Hiding in enormous bunkers underneath the Rogue Isles and Paragon City, the machines of the Chorus are always producing new, ever-changing test subjects. The Siren Chorus' mission statement is spoken in their salute; "Many Voices, One Word!"

The Blanks themselves, men and women recruited and then cloned, are an amalgamation of all three technologies. Upon being 'slated', a process which destroy the flesh and blood bodies of recruits, they can be cloned in the Chorus' Manufacturing Centers. When completed, they are put into surgery for the SCS Implant, a small device that wires directly to the Blank's brain, putting them in constant contact with the Chorus HiveNet. The HiveNet itself is a massive network where all sensory information provided by Blanks is stored, where any Blank can access and spread that information, and where the minds of the Blanks are strictly regulated.

Created by Dr. Wight, with the aid of the psychologist Dr. Praecox, and with the funding of Oberst Steiner of the 5th Column, the organization grew and began to test three major technologies moving forward, two of which were developed by Wight; the SCS (Silhouette Control Suite) Implant, and the Chorus HiveNet. The third major technology, the unstable but cheap cloning process to design the Blanks was rumored to have been partially developed by another man -- Dr. Bravura, before he split off to work alone on a different sort of personal project.

The three leaders of the Chorus are rarely seen, and speak through their Blank agents in most matters. Their commands are disseminated through the HiveNet, and the Blanks are willed to obey -- though the amount of freedom given depending on the task varies, only the most unsuccessful Blanks need tight mental controls, the rest have surprising leeway. The organization's mission is unknown, even to it's own soldiers, they only know that they must grow, and that all should speak the one word of the Siren Chorus.

The Blanks are the central servants and soldiers of the Siren Chorus. Though they each possess a mind of their own, they're all connected to the Siren Chorus HiveNet with wireless cybernetics, allowing them to access the minds, thoughts, experiences and commands of their fellow Blanks when needed. Though they are uniform, each Blank series of models have a unique personality and look, based upon the recruit the series was cloned from.

The standard Blanks, the Sirens were cloned from the very first agent of the Siren Chorus -- Kimberly Williams. Instead of sacrificing her own body for the slating process, Kimberly acquired her Praetorian double for the Chorus, and in the process, discovered the lost Praetorian Opus Laika Volkova.

The Blank Sirens, though often appearing similar to Kimberly, actually are a mix of various other recruits and genetic samples, giving the Sirens a variety of different appearances and personalities. But, they all share several traits. Sirens are social, professional, and obedient. They work as cleaners, workers, soldiers, assassins, greeters, secretaries, maids, scientists, drivers, or whatever else the Chorus requires.

The Sirens were named for their alluring and curious natures, drawing men and women into the loving hands of the Siren Chorus. They're the face, and heart, of the Chorus.

A stern series of Blanks with no-nonsense attitude and a penchant for violence. These Blanks are militaristic to the extreme, with their training patterned off of Arachnos' thuggish soldiers. The Naiads serve as frontline soldiers, and love nothing more than combat -- and swimming. Naiads, due to their discipline, serve a variety of functions with the Chorus and make excellent trainers, just don't expect all their students to survive.

One of the most unstable Blank series, the Myrmidons were designed and programmed to be the best of the best fighters. Based off an enemy of the Chorus, the Myrmidons want nothing but a worthy opponent in battle. Hungry to improve and destroy, outside of combat these Blanks are an absolute wreck. Implanted half-hazardly with an Operator's mental scans, the Myrmidons struggle between two dueling personalities. Often, the Myrmidons will choose their own weapons and customize their uniform. Because of their poor influence on other Blanks, they work solo and very few are produced. But, when it comes to taking down powerful heroes, and the Chorus can no longer rely on numbers, the Myrmidons are sent into action.

A rare sight among the faceless numbers of the Siren Chorus, the Blank Sybil is member of a series that has been endowed with psychic abilities. Using their precognition and mind-linking capabilities, they act as coordinators for teams of weaker, cheaper blanks, greatly increasing their effectiveness. Narcissistic and overconfident, the Sybils often lord themselves over the blanks they guide while staying safely behind cover, not intended for a role in direct combat despite being equipped with a pair of poison-coated flatblades.

The Harpies are an erratic Blank series that often experience programming problems due to the bipolar nature of the original slated recruit. Jumping between love and hate, the Harpies serve a pure combat role, either standing guard inside Cell facilities or as indoor enforcers, where the Siren Chorus' mental blocks keep them under tight scrutiny. Released, the Harpies enjoy preying on the weak, taking great joy in hurting others physically and emotionally, and tend to travel in tight packs with other Blanks.

An upgrade over the pistol-wielding Harpies, the Furies are fiercely loyal to the Siren Chorus, and fearsomely protective of their sister Blanks. Often seen protecting the weaker models, Furies serve as bodyguards and assassins. If the Chorus is hurt, or Blanks are killed, the Furies are the first to volunteer retribution. Armed with a set of double knives, they are ruthlessly efficient, and stand as one of the most successful combat Blank variants. Outside the mask, the Furies are antisocial and despondent, unsure of what to do with themselves.

The Sylphs are noncombatant Blanks, produced to sweet-talk and shoo away the curious. Unlike the Nymphs, that serve as social seductresses, the Sylphs are most commonly found out of uniform where their straight-forward demeanor makes them even-handed political voice for the Chorus. With above average intelligence, but a partial disdain for the public they must interface with, the Sylphs fight the war of words for the Siren Chorus. While they were not programmed for combat, the Sylphs can help coordinate and ease the minds of other nearby Blanks with their specialty sonic waves that only other Blanks can register. The Sylphs are the businesswomen of the Siren Chorus.

The Sylphs might be the studious business-side of the Chorus, but the Nymphs are the wild party girls. Most often seen at various nightclubs owned by the Siren Chorus, Nymphs seduce and tease their targets, drawing them into the Chorus' snare. When not working to recruit impressionable minds, the Nymphs work as bodyguards and escorts, accompanying Chorus VIPs in and out of uniform. Out of the mask, and even in it, the Nymphs are hyper-active flaky social butterflies. They're also trained in effective hand-to-hand combat, if they're ever called upon to fight.

A relatively new series of Blank, the Tengu are genetically altered to feature lighter-than-average bone structures. Some even have been given wings. Due to the testing, the Tengu are light and frail, but they make up for their weaknesses. Using stealth and a tricky nature, Tengu love confusing their opponents and striking at them from the shadows using kinetic 'talon' claws. The most clever of all the Blanks, the Tengu have a childlike confidence backed up by results. When the Chorus needs something stolen, the Tengu jump at the occassion.

Siren Chorus
"Many Voices, One Word" 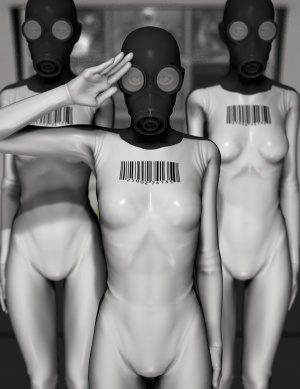