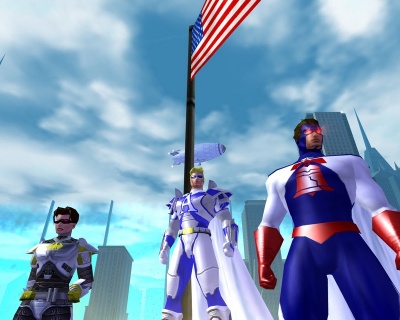 The Society of Evil

Upon returning from the Rogue Isles, having thwarted one of Lord Recluse's most sinister plan to date, namely the siphoning of every super power in the world into him, Commander Amazing was re-instated into the Freedom Phalanx. However, rather then take on full time membership, Amazing decided that the situation that brought the world on the brink of destruction should never come that close again. He decided to put together a cadre of super heroes that, should they have to, could take on the more dangerous missions of Paragon City and the world, where the Freedom Phalanx couldn't. (The latter had already been seen in what many now call the Statesman's Taskforce, where Statesman himself was powerless to stop his one time friend, Lord Recluse...)

As luck would have it, Liberty Guard, the "embodiment of patriotism" and long time friend of Amazing, began talking about just the same thing. LG would recount his days in the Justice Guard, a premier Supergroup before and after the Rikti war, that had fallen into disarray and abandonment. At that moment in time, they both looked at each other and agreed that it was in fact time for The Justice Guard to be "reborn", with a new leadership behind it, one that represented the best of the current heroes and the champions of old. Their idea was perfect, until they ran into a slight problem. Statesman still didn't entirely believe that Amazing had the maturity to be trusted with a undertaking, but with the increased media coverage and public outcry of the Captain having in fact led a team to save the world, he simply couldn't yank his membership or hero rights, nor could he put one of his own with Amazing, things were far too busy. So he came up with a middle ground: A police liaison. ArchStrike, a mutant police officer, was to be a third founding member with equal rights of Amazing and LG, just to keep an eye on things. Amazing protested but he was topped short by Statesman's ability to veto any new Super group, which he threatened to do. Amazing conceded and The Justice Guard was reborn!