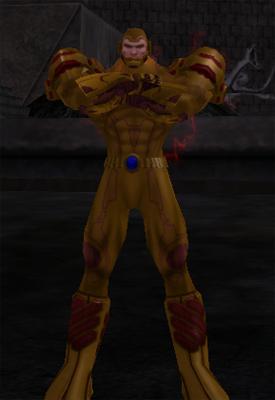 Traveling back and forth throughout time without regard for the Laws of Time Travel and respect for the Space-Time Continuum will eventually have a price. Constant interdimensional and temporal travel can cause Space-Time Paradoxes to form which can result in the degradation of one's own history or timeline. DiGregorio caused one such paradox while on a temporal heist which created an older version of himself to manifest.

This older DiGregorio has more respect for the Laws of Physics and tends to only travel through Ouroboros sanctioned portals. A Mender himself, the Timecrusher of the future dogs his younger self tenaciously, trying to correct the paradoxes he creates. Less prone to arrogance and more humble, Timecrusher II is a quiet, introspective person.

Due to some future accident, the technological gloves that allow DiGregorio to control time become damaged, their polarity reversed. No longer able to control the electrical discharges offensively, Timecrusher II uses the minerals and detritus of time travel offensively and the electrical discharges defensively. Not nearly as impervious as Timecrusher, this older DiGregorio could almost be considered "anti-heroic" - Years of temporal travel having instilled in him a need to preserve the timeline, and therefore it's denizens, at all costs.