Hero Entry #2831F, Hall of Records, Paragon City, USA: The Hero known as Transwarp first appeared in Paragon City about 3 years after the original Rikti invasion of May 23, 2002. He has consistently been helpful to the authorities of Paragon City though his presence at any particular city disaster or crime scene is unpredictable. He has not previously been associated with any Supergroups registered with the city and therefore has been considered an independent operative. Current security level is authorized at level 50. Intelligence reports have linked him with individuals such as Athena Currie and Guy Denson. Gordon Stacy in Brickstown has proven to be able to contact Transwarp on past occasions when emergencies have arisen. Otherwise, Transwarp's general whereabouts and day-to-day activities are unknown.

Unknown to the general public, the hero behind the Hero known as Transwarp is actually Dr. Franklin Hart, PhD. Dr. Hart was born in Frankfurt am Main, Germany in 1982. His parents were Werner Hart, a TV repairman by trade, and Dr. Ursula Hart, a bio-chemical professor at the Frankfurt Institute for Advanced Studies. Franklin was preceded by an older brother, Ernst, who also went into the scientific fields, obtaining a doctorate of his own in Applied Physics from M.I.T. and later taught at Paragon University.

Franklin, twelve years younger than his older sibling, exhibited a natural talent for mathematics at an early age, many times assisting his older brother with his school studies at the Gymnasium even though he himself was only a youngster. By the time Franklin turned 7, Ernst left for M.I.T. and Franklin's mother realized that the normal school system had offered all it could to the young boy and set out to make sure he could continue to be challenged academically. Through some colleagues at FAIS she found a program that would tutor Franklin privately at an accelerated rate. Thus, when brother Ernst completed his doctorate at M.I.T. in 1996 young Franklin left his home in Germany at 14 to begin his own university studies at M.I.T.

In the spring of 2002 when the Rikti invaded Earth for the first time, Franklin was still working in Boston on his now seminal thesis on gravitational entropy dynamics. Having already completed a first PhD in Applied Mathematics the previous year, Franklin felt a sudden urgency to not just study these abstract subjects for academic's sake but to transform the concepts he was developing into technological advances that could aid mankind in this far more dangerous world that the Rikti invasion had introduced. This desire was also punctuated by the recent revelation that his older brother Ernst had undergone his own remarkable change as a result of a Rikti attack upon Paragon City and was now the hero known as Doc Frost.

A Hero is Born 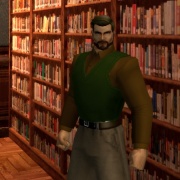 Dr. Franklin Hart, the professor behind the mask.

Having always admired his older brother, Franklin wished he could somehow also be granted super powers of some sort. Alas, short of another Rikti invasion, that wouldn't be in the cards for him. Realizing this, Franklin determined to take matters into his own hands. Obtaining a full professorship at Paragon University in the Fall of 2002 (an unheard of occurrence for someone only 20 years old but made possible by the deaths of so many professors in the invasion of the previous spring), Dr. Franklin Hart put forth his efforts full force for two years as he developed what he liked to call his "COSTUME" (COmpact Symmetrical Tachyon Unified Matrix Emission suit), the suit that made Transwarp possible.

Since 2004 the COSTUME has fulfilled all mission objectives that Franklin had designed it for but over time he discovered several weaknesses. One was the fact that the tachyon emitter array was spread out over the entire surface area of the suit which compromised its functionality when it took battle damage. In addition, in emergencies, donning the suit became cumbersome, especially the heavy full face helmet. Therefore, in May 2009 Dr. Hart completed work on version 2.0 of his suit which incorporated many new technological advancements in digital nano-circuitry designs recently developed at Paragon University. The COSTUME had become the GAUNTLETS, Genetically Attuned Unified Nano-Tachyon Lateral Emission Tuning System. The key to the design was Hart's recent discovery of a method to incorporate the emission of tachyons via nano-bots instead of standard emitter arrays. This has reduced the required mass of the device considerably and also increased its usability. The change in technology also allowed Dr. Hart an opportunity to redesign his heroic appearance.

With the return of the 5th Column's presence in Paragon City in July 2009, Dr. Franklin Hart took an indefinite sabbatical from his teaching duties at Paragon City University so that he might dedicate all of his resources and time to this new threat. Transwarp has taken a personal interest in the defeat of the super villain known as "Reichsman" (see reasons below under the "Enemies->Council" entry) as his return could bode much ill for Paragon City.

During the last week of August 2009, Dr. Hart was attending a conference in Millennium City, Michigan showcasing the latest advances in nano-technology when he was inadvertently caught up in an unprovoked alien attack by the Qularr upon the city. Immediately coming to the assistance of the beleaguered city, Transwarp joined forces with the local superheroes there and helped save the city. Having thus made the acquaintance of the supergroup known as the Champions, Transwarp was asked to stay with them a while to assist in other needs that had arisen of late. Seeing as Paragon City was still well-defended by many other heroes, Transwarp accepted their offer and is currently aiding and assisting the Champions where they need him. Whether or not he will return to Paragon City in the near future is still uncertain. 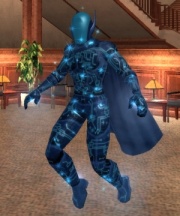 Dr. Hart, aka, Transwarp, incorporated everything he knew about gravitational entropy dynamics into the original COSTUME. The suit worked by focusing tachyon particles into definable subspace or "warp" fields around persons or objects. This same functionality has now been incorporated into the new GAUNTLETS:

--Genetically Attuned: DNA-linked to Dr. Hart so as to make them useless to anyone but him.

--Unified Nano-Tachyon: Tachyons focused into a unified subspace or "warp" field of varying intensities via nano-robotics.

--Lateral Emission Tuning System: The means by which Transwarp directs and focuses the tachyon fields.

Depending on various parameters that Transwarp can manipulate, the following powers can be achieved:

Dr. Hart's closest ally has always been his brother, the "other" Dr. Hart, as they are known around the university. When they are not protecting the city as Transwarp and Doc Frost, Franklin and Ernst share a luxury apartment in Founders Falls, which works out fine for both them since they are each rarely home. They both have their classes to teach and research to continue so little time is left for much else. They have been known to conduct missions together on occasion but by no means do they intend to form themselves as a team.

Being a taciturn and reserved professor at Paragon University hasn't made it very easy for young Dr. Hart to make many other friends in Paragon City and that has held true for Transwarp as well. While he has assisted countless other heroes in a myriad of missions and patrols over the last few years, none of these associations has ever developed into anything more than the most transitive of relationships. In general that's been acceptable for Transwarp but of late, with his brother being called to conduct more and more research and less and less field work, the younger Hart has decided to speculatively seek out other heroes to join with on a more regular basis.

While no true hero in Paragon City could ever claim to have a shortage of enemies, Transwarp does tend to restrict his activities to those involving two particular groups of criminals.