Vermillion Star is a former villain turned reluctant hero. He has an intense dislike for his brother and heroes in general, particular paragons of virtue and morality. He outwardly trusts little but his own ability, and was able to use one of his most prized skills to infiltrate the Shield of Paragon in order to seek revenge on his brother, Mr Mountie.

Vermillion Star suffers from any number of personality flaws. He is arrogant and crude, he has no regard for other people's feelings, he is a womanizer of the worst variety, and he is unapologetic about all of it. However, he also has a genius level intellect and has great experience in practical application of it. If he actually likes someone he's more apt to be cruel to them in a perversity of logic since, to his mind, staying away from him would be the best thing for them. 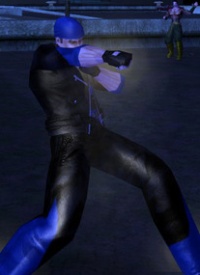 Star's powers come from a mutation in his genetic structure. This mutation carries through his family blood line, though his has manifested in unique ways. Rather than being granted the super-strength and invulnerability that is common in his family he shoots bolts of energy from his hands, and can manipulate energy in several other ways, as well; for enhanced speed, more powerful melee attacks, and to give his eyes an intimidating glow.

Trained for infiltration, Vermillion Star's high intelligence and personality 'quirks' make him perfect for this field. He is adept at changing his mannerisms and speech patterns to fit what he wants people to think of him. This was proven when he successfully infiltrated both the Reciprocators and the Silver Guard with intentions of killing some of their most prominent members. During the same period he met members of both groups in combat as his alter-ego Baron Nightshatter without anyone ever connecting the two of them.

This hero underwent a trial and inquery into his former alternate identity as Baron Nightshatter. During this trial many of his secrets came to light, and he was convicted of countless crimes, all of which he admitted to. The difficulty came in because of his long hours as a hero in Paragon, and the many lives he's saved. Eventually, he was let into a kind of parole with the Reciprocators, wherein he was allowed to keep his freedom so long as he met a certain amount of active hours per week as a hero, was tracked with an implanted beacon, and reported to a parole officer. He has since been released from these conditions, though is still looked upon with suspicion by the City at large.

Christopher Mathews was inducted into the ICE FIELD Hero Training Academy at eighteen years old. For the first two years he only managed average grades despite his high intellect. Teachers cited a lack of motivation and drive, as well as a 'class clown' attitude. He was fairly popular at the school though he had a tendency to get in trouble, picking fights with other teens.

During his second year he witnessed a horrible crime committed against his sister, Courtney, and his mind twisted the events he perceived in order to help deal with the fact that his powers weren't enough to stop what was happening. Instead, he transfered the blame for this event to his older brother whom he began to resent, and see as a symbol of everything that was wrong with the world. This obsession built on itself and in his third year at the Academy he switched majors to History with a focus on the effects of Meta Humans on society. He made excellent grades throughout the entire year and then, rather than complete his fourth year in the school/academy and recieve sponsorship, he dropped out. He finished his education in another school while he crafted his dual identities; Vermillion Star, and Baron Nightshatter.

He moved to Paragon City not too long after this and began to build a reputation in both the city proper, and the Rogue Isles. For several more months his hatred festered but he didn't dare make a move yet; he studied his brother and the heroes he associated with, and he planned.

It was around this time that an accident in a Crey Lab brought the Praetorian of his brother, Justin, into Earth Prime. The Praetorian sought Star out and they made a deal. Star saw him as a perfect vision of everything that his real brother should have been. He all but worshipped at his feet as they plotted the deaths of their mutual enemies.

Eventually the mental turmoil Star was in caused him to reveal his dual identity to his niece, Emily Kincaid, a powerful psychic. She probed his mind and unlocked the truth of what happened on the day that his sister was attacked, and made Star realize that he was seeking revenge against someone who hadn't done anything. He reeled in the realization that all of the terrible acts he'd committed were in fact unjustified, and he sank even deeper into himself. He became convinced that the only one who could destroy his brother's Praetorian and end the threat was himself. He used his unique position as a confident to betray and murder the Praetorian, and ultimately to save his family, and perhaps himself.

The Praetorian dead, Chris had few choices left in life. He went to Black Starbeam, co-leader of the Reciprocators, and handed himself in. Shortly thereafter, as he was held inside the Citadel of Defiance, he was grudgingly given the chance to prove his worth by saving a friend. He exploited his contacts in the Isles to learn who was attacking Bridgit O'Malley and used this information to help toss off the hold that Giovanna Scaldi had on her soul. Once again he had proven that some remote part of him was actually interested in helping people.

Thus began the long process of a trial that would rip almost every secret from him, and bring it into the light. Much to his chagrin there was heavy coverage of these events in the media, and he is still widely remembered more for his betrayals and secrets than for his good works. The trial eventually resulted in his parole and release to the Reciprocators, in light of his immense works as a 'hero'. As much as he tries to avoid that title, playing it up was necessary at the trial, and his lawyer did an excellent job of it. He was implanted with a tracking beacon, placed under the watch of the Reciprocators, and had to report to a parole officer. But this didn't stop him. He discretely began life anew - both in Paragon City, and the Rogue Isles. This time, however, his adventures in the Isles were purely for informational purposes, and he hurt no one that he wouldn't have as a hero anyway.

Shortly after this Chris made the acquaintance of two individuals that would change his personality and life immensely; Wisp Kestrel and Hard Russian Winter. Over time it became clear that Wisp was in some kind of trouble, and he and the Russian formed a very uneasy alliance to help her. Through macho banter and immature name-calling, the two men eventually fell into a struggle for Wisp's affections, despite the odds against such a thing occurring. Eventually the three heroes were able to overcome incredible obstacles and free Wisp Kestrel from her torment. Strangely, to Chris, she chose him over the Russian and they began a romantic relationship - a first in his life. He'd been with hundreds of women, but never had he had real feelings for one.

All of this came into jeopardy when his old, shady business contacts found out he'd "gone hero" on them. A criminal named Bricks turned on Chris and blamed him for a job that had gone bad and ended with Bricks spending time in the Zigg. He claimed that the 'hero' had set him up from the beginning, and he planned to exact revenge on Chris and his former criminal partner, Hui Cai. Chris found himself in a struggle with his own morality at the centre of it; did he kill Bricks and betray the Reciprocators, possibly landing himself in jail, and tearing him from his newfound love? Or did he arrest Bricks, prove once and for all that he was one of the 'good guys', and risk losing his entire business? In the end his former partner betrayed him and Chris overcame Bricks, Hui Cai, and several guards in a final struggle that ended in the arrest of the criminals - not their murder.

Now thoroughly tagged as a hero by villains, and a mercenary by other heroes, Chris exists in a limbo state. His membership to the Reciprocators has been called into question dozens of times, but he maintains his position with them firmly, now being a long-time veteran of the group. Despite unorthodox methods and a far-from-winning personality, Star has earned some respect from the leadership of the group, and he insists on reporting directly to them, and only them. He refuses to take orders from lower officers. With such an attitude its hard to tell how long he'll last in the group. Of course, people said the same thing when he first joined, over three years ago.