Vixen Violet, alias Stephanie Halifax, is a former agent of the British SIS (what most people know as MI6) and current costumed hero operating in Paragon City. She was formerly a member of The Dawn Patrol, and in her secret identity is an "employee" of Crey Industries.

Stephanie Halifax has served Britain for most of her adult life. The daughter of Nigel Halifax, an operative of the UK's Secret Intelligence Service (commonly known as MI6), she was destined for service from a young age.

Her father, unbeknown to Stephanie, her father was the first volunteer subject for what would be known as Project Sovereign. The British government had endeavored to create super powered agents through various means ever since the Age of Heroes dawned following the First World War. Project Sovereign was an outgrowth of this effort that began in the late 1950's, and culminated in a serum developed for the purpose of enhancing humans. It gave those that took it heightened strength, agility, and stamina, but fell well short of the superhuman levels that most Heroes possessed. Still, Nigel and several other agents were selected as subjects, and received the serum. He would go on over the years in several over-seas assignments for the SIS, carrying the code name "Sovereign One", as he was the first recipient of the serum.

Stephanie joined the SIS after graduation from university, and was eventually assigned as an operations officer in her father's section. The section was in charge of British intelligence operations in the Rogue Isles, and had several agents in place. When one of these agents requested a meeting with Section Chief Halifax, nothing seemed amiss. However, it was all an elaborate plan by Lord Recluse to secure a sample of the Sovereign Serum. Upon his arrival in the Rogue Isles, Stephanie's father was captured by Arachnos agents whose aim was to try to reverse engineer the serum from samples of Nigel Halifax's blood. However, when this proved impossible, another plan was required.

With their extensive knowledge obtained through interrogation of the elder Halifax, Arachnos agents learned that MI6 still possesed samples of the serum, and held it in it's archives, untested. Instead of attempting to break into the facility, Lord Recluse decided that they would force Stephanie to steal it for them, as she already had access. Through various clandestine channels, they delivered their ultimatum to Stephanie, deliver the serum or her father would be executed. Stephanie, though a loyal agent of the crown, was even more loyal to her father and complied. After her theft, she traveled to the Rogue Isles where she was taken captive by Arachnos as well. Reunited with her father in a dank cell, Stephanie learned the truth about his past and the Sovereign Serum.

The two spent several months locked in their cell, plotting escape while Arachnos scientists endeavored to unlock the secrets of the serum. What none of the parties involved suspected was that the Sovereign Serum had not been simply stored since it's use in the 1960's, but it had been tinkered with and improved upon. SIS had, in recent years, captured several of the Fifth Column's War Wolves, and had worked to incorporate some of their abilities into mix, namely greater strength and their uncanny abilities of healing. Also, an initially unrelated SIS program to give agents concealed weapons had been added to the serum. The Nanorobotics division had developed and programed a series of nanites that could be suspended in the serum medium, and would activate once they were exposed to the blood stream of the subject. They would rebuild the subjects internal makeup, giving them claw-like weapons that could be extended from their hands. The nanites would construct the claws from a trinium alloy, meaning that they would not be detected by metal detectors. This, combined with their concealed nature, made them the perfect weapon for spies and intelligence agents operating in a world of super powered villians.

After enduring their imprisonment, Stephanie and her father finally escaped from captivity. Knowing that even their own survival was less important then preventing Lord Recluse and Arachnos from unlocking Sovereign's secrets, they quietly made their way through the complex to the lab facility. There, they incapacitated the scientists, sealed the building, and rigged the facility, including all computers with Sovereign related information, to explode. However, before they could make good their escape, they building was surrounded by Arachnos soldiers. Nigel knew that he could probably escape with the help of his enhanced abilities, but his daughter would never make it. Unwilling to simply leave her, he knew there was but one option left for her. With the enemy soldiers trying to break their way into the facility, Nigel gave Stephanie the serum.

The affects were immediate and alarming. Unlike her father's experience with the process, which had been easy, Stephanie was wracked with convulsions and sharp, stabbing pains. The untested formula warred with her body, the lycanthropic elements breaking down her biological makeup, while nanites ripped apart and rebuilt the inner structures of her forarms and hands. Looking on in horror, Nigel was almost oblivious to the Arachnos agents that were then entering the room. As they opened fire on him, he picked up his daughter and dove behind a consel. Hefting a weapon, he began to return fire, but knew that he had been pinned down. Unable to get up to speed before being shot, he knew that they were trapped.

Before the end came, however, a scream of fury erupted behind him and his daughter vaulted over the consel and attacked the Arachnos agents with her claws. Stephanie made short work of the surprised agents, their own weapons proving inadequate to harm their attacker. The two would eventually make good their escape and destroy the facility, ensuring that Arachnos would not have the Sovereign Serum. They would steal an Arachnos Flyer and take it to the American mainland, and eventually return to Britain. 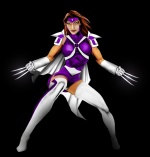 Vixen Violet's fist costume
Upon their return, Stephanie was examined by doctors and scientists of the SIS. It was found that as a side affect of the War Wolves additions to the serum, she could transform into a somewhat wolfen form, retaining human features with canine elements. With time, she became able to control the change, and could maintain her fully human appearance. She was eventually cleared, and released from the medical center.

However, as a result of her actions, she was removed from the SIS, and only avoided prison time through the intervention of her father and the fact that the formula for the serum had not fallen into the hands of Arachnos. Crushed and unsure of what to do now, she began to slip into a depressed state. However, her father provided an answer. With her new powers, she would make an excellent costumed hero, still able to serve her nation in her own way. Father and daughter would design a costume, and chose the name "Vixen Violet" (a reflection that her canine form's red-orange fur resembled a fox).