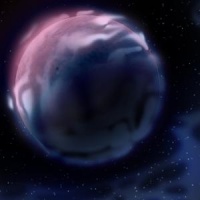 The only existing picture of Xol'na.

Xol'na(pronunciation: Zohl-nah) is a relatively unexplored planet about 50 light-years away from Earth, part of the Fomalhaut star system. It exists inside of the Piscis Austrinus constellation, just outside of Fomalhaut's "kuiper belt". The planet is thought to orbit the Fomalhaut star itself. Xol'na is the homeworld of the Xol'nari, a race of humanoids with incredible cerebral capabilities. The only known Xol'nari is The Eldermind, perhaps the only Xol'nari to exist outside of the planet.

Though capable of sustaining life, Xol'na is uninhabitable by man; though there are levels of oxygen, nitrogen and carbon dioxide, the levels vary greatly. Somehow the Xol'nari have evolved advanced respiratory systems capable of surviving such drastic atmospheric changes. Xol'na itself is a hot, steamy and stormy planet -- what exactly rains is unknown.

Once thought to be a void planet, it was revealed during the Rikti War that Xol'na did in fact harbor sentient beings, most notably a race calling themselves the Xol'nari. Despite being carbon-based life forms and thus similar to Earth life, many of the inhabitants of Xol'na are incredibly complex and far more advanced, by both mental and evolutionary standards. The surface of Xol'na is hot and barren, sustaining very little life; thus, most of the sentient beings live underground, amidst the planets many catacombs and natural labyrinths.

Evolution of life on Xol'na occured millions of years ago, with its dominant race existing since before humans existed on Earth. Much like that of Earth, it began with single-celled organisms that grew from the aquifers within the planet's crust. Over the course of millions of years, these organisms further adapted until today -- curiously identical to that of planet Earth.

The most advanced species on Xol'na, and arguably one of the most advanced in the universe, the Xol'nari are blue-skinned humanoids with incredibly powerful mental capabilities. They dominate other forms of life on Xol'na as the dominant predatory, and the only form of sentient life. Like most other lifeforms on Xol'na, the Xol'nari dwell in vast, cavernous cities beneath the ground, built around natural aquifers under the planet's surface. For more on this topic, search Xol'nari.

Though very little is known about them, the Xol'nari have made mention of a lesser, semi-sentient species called the "Kthel'nari". From what has been discussed, it is believed that the Kthel'nari and the Xol'nari exist together in a caste system. Some theories include slavery or a semi-symbiotic relationship between the two species.

While not a species, "Ilkatha'nari" is a word in the Xol'nari language that refers to the lesser, non-sentient creatures that inhabit Xol'na. What these creatures are, exactly, is unknown; however, the word "ilkatha" -- when used to describe a sentient being -- is thought to be a derogutory word.

Though the Xol'nari keep to themselves for the most part, it is known that the Xol'nari have been involved with the Glaciorians of Olympia. The Xol'nari, powerful telepaths, felt the ripple in the fabric of reality and raised the call to the much stronger Olympian fleet. The Glaciorians response was instantaneous. Supposedly, Xol'nari telepaths inadvertedly influenced various government officials to the spearhead the swift founding of the Vanguard. Whether this is true or not is debatable.

As a planet, Xol'na's resources are utterly useless to man. All attempts at contacting and establishing an inter-planetary alliance have been ignored. It is known that the Eldermind - the only Xol'nari known to humans - has a superiority complex to human beings, which may be shared by the race. However, he is known to regard the Glacorians with respect and relative equality, thus alluding to a respectful alliance between the two extraterrestrial species.