Derby from the Deep

Derby from the Deep associates with the Legitimate Businessmen, as their flippant disregard for human safety provides no end of interesting conversation around the water cooler.

A guardian of the Outer Hells, the Derby from the Deep was raised in a carefree, easy-going environment by the Blind Idiot God, Azathoth. All insolence was punished with immediate dispersal into the Void; all progress was rewarded with immediate dispersal into the Void. Such an upbringing has gifted Derby with a very upfront and curt attitude, ideal for middle management or sales.

After accidentally devouring both a goth and the contents of a Naruto box set, Derby developed vast and incredible superhuman abilities. Of course, being already superhuman, they were mostly on par with prior knowledge.

Derby possesses the ability to initiate a devastating kancho attack, funneling qi such as to make an opponent's skull fly out. This also works on trees, bank vaults, and certain models of mailboxes. What a mailbox would be doing with a skull or an anus is as yet unknown. Then again, how does a Derby know what a physiologys is? After watching Star Wars, Derby learned the infamous Jedi Mind Trick, and can relax the sphincter muscles of any foe with a simple hand wave (great for parties on tile floors).

Cloaked in an irritating fog effect, Derby moves amongst her prey unseen and unheard, outside of the low hum of toggle effects and a constantly emitted atonal piercing wail. Oddly enough, nobody ever notices the black, glowing cloud slowly walking between, and often bumping directly into, them. In addition, Derby from the Deep can also leech the life force of all nearby using a ferocious Dark Regeneration, transforming it into reassuring green numbers that float skywards. Finally, the Derby has developed an astounding ability to stun those in the immediate area. Touch Derby, get dizzy.

Everyone has special aptitudes and is perfect in their own way.

In an incredibly misguided attempt to be useful, the Derby from the Deep can call mere mortals through the fabric of existence itself simply by tugging them out of temporal reality for a short second. Unfortunately, this usually involves meeting Derby's parent(s) and an embarrassing several hour long discussion about STDs and birth control, during which Derby stares blankly at the transported person while the gibbering voices of the Unformed One echo inside their mind. Fortunately, this voyage beyond the gates of time only takes a split second for onlookers. Unfortunately, once you've seen a slideshow about deepspawn making inappropriate peer-to-teen choice behaviors, you can't really unsee it.

By pandering to Ghost Widow's tragic ass, Derby from the Deep has gained the ability to send people back to the Ghost Zone or something by pretending to be a blaster. More importantly, however, is that Ghost Widow imparted the knowledge of how to use the vagrant souls of the damned to make people do barrel rolls for prolonged periods of time. Both hilarious and marginally useful, it is widely regarded by some as the best power in the game, bar none.

I have no mouth yet I must snack

As an Other God, Derby is an undisputed master of the dance. This has no practical benefit in game, as Council will not drop what they're doing to engage in an impromptu acts of revelry. Still, should this occur in a later patch, one can rest assured it will be put to good use.

Derby doesn't have a mouth. Also, if smacked around too much, Derby will usually die. Make sure to feed and water your Derby, and pay plenty of attention to it. Derby is a choking hazard, and may explode at high altitudes unless properly stored. 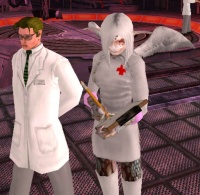 Derby in an unsuccessful attempt to cure boredom

A secretive cabal consisting of Professor Robot, TheProctologist, and Wikipedia seeks to mate Derby with a storied and ancient Moon Warrior, as is told in the prophecy. Although the three great sages proclaim to know the results of such a mating, they have no comprehension of how it could be brought about. Some say that when the stars are in alignment, the blood moon rises over the horizon, and several bottles of Jack Daniels have been imbibed, shall the Derby find a host and commence vigorous movement resulting in the impregnation of one (or both) participants.

Derby holds doctorates in all known fields of science and medicine. Unfortunately, most of them were obtained off of the Internet, excepting those stolen during mad fits of passion and a small business card with nothing but "Amateur Gynecologist" written in bold typeface.

This legitimate article is relatively rounded out. Businessmen can add to its legitimacy by writing more information in here. Others can help by doing nothing.