Professor Robot is at least 3 times cooler than you.

Depressed, sullen, pessimistic, sarcastic, inebriated, and all sorts of other unpleasant terms could be used to describe Professor Robot's personality, let your imagination run wild.

Because being able to fly is clearly the coolest means of travel, Professor Robot made sure to install anti-gravity devices in his feet. These, when fully functional, allow him to zip across the sky at high speeds. When not at full power, the Professor is left slowly crawling across the sky.

Ever the coward, Professor Robot has developed an advanced cloaking system. This allows him to follow his natural inclination to run and hide rather than actually engage in combat.

Professor Robot has many useful devices, none of which can be discussed publicly as they are a tad inappropriate for polite conversation. To sum up though, ladies, he can make you pregnant. 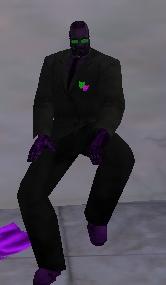 Professor Robot in one of his invisible chairs (PATENTED)

The man that was Professor Robot was once a less than successful college professor at a less than prestigious community college in Paragon City. Professor Robot had never felt much of a drive to succeed after accomplishing all he would ever need to secure a place in the history books with his co-invention of the invisible chair (the subsequent royalties proved to be quite lucrative as well). The Professor was quite content to waste his life away sitting on an invisible stool with a bottle of gin in hand. Unfortunately it soon became apparent that at his current rate of alcohol intake his life wasting would quickly be coming to an end. To avoid the complications of liver failure, Professor Robot chose to remove the complications of a liver entirely, replacing the organ with a vastly more efficient machine. Realizing how successful the mechanical liver had been, Professor Robot chose to fashion an entire mechanical body for himself. Realizing that Robots had very limited career options, the Professor entered into super heroics, hoping to secure yet another chapter for himself in the history books (of course no one has told him that nobody actually reads history books). To that end, Professor Robot joined The Circle of Jerks.

It has been recently revealed that Professor Robot is one of the last remaining sages of the ancient Moon Kingdom. Together with TheProctologist and Wikipedia, the other remaining sages, he searches for the prophesied Moon Warrior who, after enough bottles of Jack Daniels, will mate with Derby from the Deep and save an unspecified world from an unspecified destruction. Having failed miserably thus far, the search continues.

Professor Robot was for a time transformed into what he dubbed a "Zombot" during the zombie plague that swept the Jerks. However, after devouring Grae Knight's brains his hunger subsided and his condition has since improved.