'Rapace' is a French word meaning 'bird of prey' or 'raptor'. I casually lifted the name from the rather delectable French comic book Rapaces, which I believe has been released in the US under the name Raptors. It's the rather seedy story of two disenfranchised vampires exacting revenge on their brethren just as they commit the same sins they seek vengeance for. I can only highly recommend the book, though it bears no further meaning for the character.

The character itself was mostly conceived as an experiment of how far I could bend the system with IOs (and so far it's looking pretty damned good) and the personality more fell into place through IC needs and experiences, but I'm very happy with the end result. That said, both personality, background and powers may remind people of existing characters, in particular Ambrose Chase and maybe Gambit. I can only assure people that none of this is conscious, things just worked out that way.

Both Darius and Rapace are generally outgoing and friendly, albeit in slightly different ways. Rapace is a flamboyant swashbuckler and in many ways as much performer as he is crimefighter. A mutant physique and the ability to almost completely defy the laws of physics via some subtle manipulation of his time field do of course help with that. When the mask comes off, he becomes more subdued in his actions, but makes up for that by being more verbal. Of course, 'subdued in his actions' is a questionable phrasing when it regards a man for whom the world as it exists in real time moves at a constant snail's pace.

Of course, at the age of 17 and even with the ability to react to matters immediately as they unfold, Darius still lacks a whole lot of polishing and refinement. Every once in a while, his attempts to bring a smile on a girl's face are horribly misinterpreted in one way or another. He won't let that stop him, of course.

On the one hand, he just enjoys being a charming rogue (when he can pull it off) for the simple reward of seeing someone smile, on the other hand (and very few people realize that) there is something much more serious going on inside. Despite his crimefighting exploits, despite witnessing the first Rikti Invasion, Darius Lafayette has always lived a relatively safe and sheltered life. Never had to go hungry, always had a roof to sleep under unless he chose otherwise.

Hurricane Katrina and, more importantly, its aftermath changed a lot of that. Most importantly, it gave him perspective on what little whatever problems he was under the impression of having weighed, and how short and miserable life could be. He simply won't stand for anyone wasting their chances to be happy for a day, or anybody else trying to ruin these chances. At the end of the day, how much more is there?

Rapace is surrounded by a personal energy field in which the physical laws of time do not apply but the passage of time itself is instead subverted to his will. He can speed up or slow down the passage of time for individual objects (or even parts thereof) within his time field, to the point of slowing down time so far, it's essentially stopped. In practice, he cannot actually stop time, but the degree to which it is slowed is so massive that it might as well be. 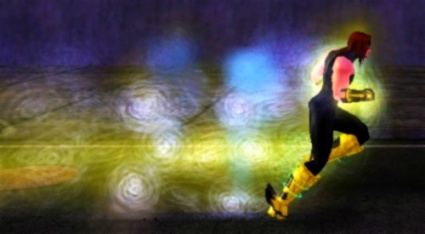 Rapace 'flickering' across Kings Row. Note the bluish afterimages and temporal ripples left behind by each individual 'flicker'.
Simply put, Darius Lafayette manipulates relative time. Most often for himself, but to some extent for his surroundings as well. He can casually speed down incoming attacks while still moving at normal speed himself, giving an onlooker the impression they're watching a scene in 'Bullet Time' (eg. The Matrix). By the same token he can speed up his own motion to the point where he moves faster than the human eye can follow, at least in spurts. When that happens he seems to 'flicker' from place to place, as if watching a movie with music video style fast cuts (eg. Out of Sight).

Combining these two rudimentary applications, he can turn into a holy terror on a battlefield, seemingly appearing everywhere at the same time, hitting enemies with debiliating temporal distortions or flinging time-shifted high-speed projectiles at them.

Other applications of the Time Field allow Rapace to defy the laws of physics altogether. He can literally walk up walls or on the ceiling by simply stretching out the period of time before gravity overcomes friction. By similarly tricking gravity or inertia, he can reverse his direction or stop dead in his tracks no matter at which speed or angle he's moving. This allows him to pull off seemingly inane stunts such as balancing his entire body weight on a single toe or finger and generally show off while doing whatever he's doing.

In the same vein of cheap parlour tricks, Rapace can easily 'store' small objects in his time field, keep them suspended and invisible once they have gone sufficiently out of synch with objective time and then apparently pull them out of nowhere as needed. For the most part, he wastes this particular talent on flowers (which stay fresh as an added bonus), hot and cold drinks (which stay hot and cold, respectively) and ice cream (which also doesn't melt).

Maybe as a result of growing up with his malleable time field, Rapace's brain and nervous system have adapted themselves to high-speed life. While he cannot actually think faster than anyboy else, he is very used to perceiving high-speed objects, sizing up situations on a cursory scan and making split-second decisions based on what he sees. This is not so much a conscious process but subconscious conditioning, as experienced by Formula One drivers whose reactions behind the wheel are based on a mental idea they have of a racing course that flies by too fast for them to actually properly perceive.

Furthermore, Rapace enjoys the benefits of a classical Mutant physiology. While not markedly different from that of a normal human, the same changes in the genetic makeup that effect the large scale changes and 'super powers' many Mutants exhibit are theorized to also affect a Mutant's body on a subtler level. In particular, Mutants, even those who are not necessarily more resistant to injuries, display a heightened ability to bounce back from non-fatal injuries and generally are less susceptible to common diseases that afflict baseline humans. It has been theorized that on a micro scale, Mutation never stops and that a Mutant body's cells evolve even as they split, conditioning the body for survival. While this Secondary Mutation happens at a much slower speed than the Primary Mutations usually exhibited at puberty, it has been found present in many Mutants around the world.

Rapace is no exception to this widespread phenomenon and has proven his physical resilience more than once due to his high-risk approach to crimefighting. Beyond this common amount of fortitude, his musculature and bones have grown in such a way as to allow him maximum comfort and ease of movement in all situations. He is easily as nimble as a world-class gymnast or double-jointed circus performer, even though he cannot achieve the latter's full potential due to having more bulk than a comparable performer and therefore limiting his body's ability to contort itself slightly.

This physical state of being in turn lends him an easy air of cat-like grace, even when not manipulating time to trick the laws of physics.

It's pretty much an open secret that Rapace is the son of a former super-villain. Supposedly, he fell for Rapace's mother and hung up his cape for good (or so he thought). However, the identity of his father has never been officially disclosed or acknowledged, and he himself refuses to give any statement to the extent. In fact, he may have had all memory as to his father's true identity stripped from his brain to prevent the information from being "found" by an inquisitive telepath. If not that, it's at the very least buried very deep in his mind.

Rapace was twelve when the Rikti first invaded, but his powers had already broken their way to the forefront (not to mention that he had received some rudimentary training in their use as well as knowing some down and dirty fighting moves). Therefore he couldn't be kept from volunteering to help with the war effort in the southwestern US. While noone had any intention of having a child serve in the front lines, his ability to move at high speeds or simply accomplish tasks faster than anybody else found good use in field hospitals or relaying sensitive commands despite radio silence.

It was in this capacity that he first met the Teleporter Kacey Baker aka. Wayfare and as is to be expected with children, they immediately developed a sort of rivalry.

Five years after his first outing against the Rikti, Rapace had long since stopped being a little boy. After seeing his mother was safe, he immediately set out for the heart of the conflict, the site of the downed Rikti Mothership: Paragon City. By his own admission, concern for the girl who for better or worse was still his best friend was as much of a motivating factor for this trip as the obvious fact that Paragon City needed all the help it could get. A fact that played havoc with his emotions due to memories of Hurricane Katrina.

Getting to Paragon was an obviously easy task for an experienced timecutter, and due to the Rikti attacks, it was just as easy to get a provisional license and a place to stay in the Longbow barracks. Not ideal, but at least a roof over his head for when he'd crash after hours or fighting.

He'd not allow Paragon City -or any place within his sphere of influence- to turn into a second New Orleans, straight and simple. By design, he was reuinted with the aforementioned friend, Wayfare in Paragon City, and surprisingly enough also with their former comrade in arms, Deadlight, as well as running into some of the locals, including the Urban Shaman Fatal Harmonic.