The original idea was based on the idea of the Little Mermaid mixed with the Batman. She was supposed to be a mutant who was about as close to natural and normal as possible having trouble with the super powered world around her. Her story retains some of these aspects but has changed a bit since the story moved on.

Desend features a very complex history filled with lies and deceit often making it confusing for people to quite understand what the real truth is. This is further complicated by the fact that over the course of the character's life two different players have had a hand in shaping it. It's also important to remember that Serpeanids grow extremely fast compared to humans, averaging four times faster.

Ascend, who would later be known as Desend, was hatched in one of the few static tribes among the Virtea, in a place known as Observance due to its close proximity to the humans. As is common with Serpeanid tradition and society, Ascend and her sisters learned from their mother on how to find herbs while her brothers learned how to hunt from their father. However, when she was two years of age a plague broke out among the land and many males died from it. To compensate for this, the elders selected some of the fitest girls to learn how to fill roles the males traditionally preformed and Ascend was among those picked. At first she was assigned to be a hunter but her knowledge of herbal proved useful for helping the injured warriors of her tribe who would raid human ships for rare supplies. So she was transfered yet again to joining their ranks and helping aid any who would get hurt in such a dangerous task. She proved extremely successful on these raids due to her tracking skills, knowledge of herbs, and combat skills.

The other Serpeanid tribes even learned of Ascend's abilities and many thought she would go down in their legends however it was not to be. Five years after her hatching when she along with all the others hatched around the same time as her were to have the elders prophecy over each of their futures and be declared an adult, a major disaster occurred as the chief elder was murdered by a fellow Serpeanid. Such an act is unheard of, to kill another Serpeanid is to kill one's very own brother or sister and the entire ceremony was put on hold while they hunted down the criminal responsible. This however left room for quite an awkward turn of events as the ceremony precedes the mating season, and since this was to be their first after being declared adults it left many of them confused as to what to do. During this time, Ascend had met Strong and the two fell in love. Yet it didn't last long as shortly after the mating season had passed, the criminal was caught and the ceremony finally went ahead as planned after the criminal had been tortured to death and then skinned alive with his scales put on display outside the temple as a warning to all.

When it came to Ascend's turn for a prophecy to be established, many had great hopes that she would be a champion of their dieing race and it was made the big event. However, the new chief elder prophesied that her staying would led to the destruction of their tribe and for their sakes she must be banished. So as was tradition, they changed her name to be more fitting but not wanting to punish her for things beyond her control they named her Desend instead of Descend. Not wanting to doom her to death, the elders asked her if there was any place special she would wish to go and they would help in anyway possible. Desend asked if it were possible to live on land as she had grown fascinated by the human creatures. It took several weeks for the elders to finally get back to her as they spent long and hard to find a possible solution and they found an ancient shamanic ritual that would turn her into a human permanently if she should ever step on land. Desend agreed to this and the ritual was enacted turning her into a human. As a final farewell, she and Strong swam to the shore together looking at each other one last time before never seeing each other again as she walked towards the land to begin her new life.

Having left her old life behind for good, Desend began her new life as a human with a harsh lesson in human greed. All alone, unarmed, and completely distracted by all the new sights, and sounds not to mention that she wasn't at all used to being a human and kept stumbling or falling over while trying to walk it didn't take long for a band of highwaymen to quickly seize her. Having nothing of value on her, she was taken to the leader of the highwaymen to find out what they should do with her. As would be expected of such depraved individuals, they tried to take advantage of this strange acting foreigner. However she had managed to use their infighting to free and arm herself, quickly slaying several of the highwaymen. The rest of the highwaymen were about to slay her as she was easily outnumbered but the leader found it amusing that a woman had such skill with a sword and ordered them to stop. Not wanting to stain his reputation by having his men killed by her, he himself challenged her to a duel. Naturally she didn't understand anything they said this entire time nor could speak a reply so she just stood their still on guard in case anyone would attack and with the leader drawing his sword and heading towards her after all the others stopped attacking it didn't take long for her to get what was going on. What the leader of the highwaymen wasn't expecting was that his combat experience paled in comparison to hers and she soundly outclassed him until he surrendered.

In a strange turn of events, the leader of the highwaymen offered her the position of his second in command. Desend still unable to understand anything just stood there with her sword to his throat. What followed was a long and drawn out situation with the highwayman trying to bargain with her and she not doing anything. It wasn't until she started blurting out words randomly that it clicked to them that she couldn't understand anything nor speak it. With this knowledge in mind they tried many different things to try and get her to understand what was going on and eventually thanks to a crude drawing in the dirt she understood and agreed to join them. As she joined them on their raids, muggings, and often as being bait for a trap set by them, they in turn taught her all the necessary things needed such as English. It wasn't a fantastic life but at least it suited her abilities and she got to learn a great deal about humans, from their ways of life, politics, and even human weaponry. Desend was particularly drawn to the bow as she had found human bodies to be far less forgiving and much more rigid then what she was used to and one screw up with a sword meant she might be in serious trouble and with a bow she could keep her distance. She eventually became quite skilled with her bow to the point she even won a couple archery contests in various towns.

Yet with rumors of a crusade being called, the lord of the land decided to take a campaign against all the theives, robbers, pirates, and highwaymen that plagued his lands so he wouldn't be left wide open when his troops would have to be sent out. Desend, constantly trying to learn about humans, learned of this and warned the highwaymen. Most favored leaving to a different country but the leader of the men came up with quite a daring plan. Over the years, many people had joined his group to flee the corruption and problems of life following the law and it grew to the point where it was almost an army in it's own right. Desend was sent as an envoy to the lord knowing that he would more likely accept a proposal from her then if he sent one of his men or himself. The plan was simple, she was to try and get the lord to agree to grant a pardon to any criminal who pays a small fine and serves in the crusade. The lord eventually agreed figuring that no criminal would actually pay their dues, never mind joining the crusade. However, the highwaymen had enough wealth in excess that every one of them paid their fines and agreed to join the army. In the end, so many ex-criminals took advantage of this that the lord didn't have to send out a single soldier of his own nor spend a copper on equipping them while in return, when the ex-criminals would return from the land they would get to live a rich life without any fear of being hunted down. 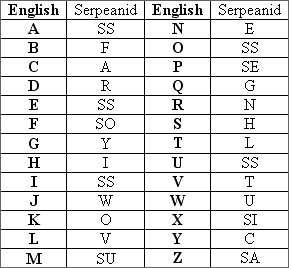 When Desend is in her true form she is unable to speak anything but her kinds language which is made up of hissing and growling. But it is actually very similar to English with different sounds and less letters. The Serpeanid language is mostly verbal but they do have a written language that is a type of hieroglyphics focused more on simple pictures letting most people to be able to figure out with a bit of guess work.

To the right is a guide to translating the spoken language to English. Its important to remember that anytime an s sound appears in Serpeanid it is the first letter in a pair unless it follows an s.

There is also a few changes in their speech since names are often taken from words. Desend Lionert is directly translated as "Rsshsser Vssssessnl" but this isn't right because it is a name of a female so it should be "Rsshsser Vssssessnl'so" with 'so meaning F for Female. The other two main ones are 'su for Male and 'se for Place.