Alistaire Carson-Davies is a spoiled little girl who grew up to be a self-indulgent and self-centered bitch, with few morals, fewer scruples, and absolutely no shame. She deals drugs, she buys and sells guns, and... she'll engage in whatever "thrill" activity comes along to get her attention. Including larceny, extortion, blackmail, and manslaughter.

Of course, that's where her story begins. What she becomes now that she's a Sigma? Anybody's guess.

Alistaire doesn't have any powers, really. But she has friends, she has guns, and she has drugs.

Alistaire's posse is a loose association of men she calls the "Boytoys". These guys are punks, pure and simple. But they like her, so they are willing to fight for her. For her part, she keeps them armed and happy, with whatever illegal contraband she's managed to acquire.

Alistaire lucked out in one of her weapon buys - instead of the cheap street-soldier 9mm handguns she expected, she discovered that her seller had included two custom Sig-Sauer 9mm semiautomatics, both equipped with the latest laser designators, flash suppressors, 15-round clips, and even scopes. Of course she can't conceal them very well, because of the gingerbread. But damn they look sexy riding on her hips in cross-draw holsters.

Plus, she's not that bad of a shot with them.

She uses 9mm Parabellum rounds, and tends to aim for the head or the center of mass. Occasionally she aims for the groin or the kneecaps, if she's looking to mess up someone's day rather than just kill them.

One reason WHY the guys like Alistaire so much, is her stash of pharmaceuticals. She's got drugs to make you feel better when you're hurting, DMSO compounds that'll attack the target's endocrine balance, and even some things that'll wake someone up from a coma and make them feel invincible for a short time. She's always on the lookout for new things to try... and she's not above using her crew OR her targets as lab rats.

Alistaire has few abilities per se. She's good at recognizing gun makes and models, and can tell a gun that's been shoddily put together or not taken care of. She also can recognize most street drugs by the mark indented on the pills, or in the case of pot, by taking a slight sniff of the dried leaves. For things like coke, heroin, or Superadine, she carries test kits to determine their 'cut' and quality.

She is a consummate shopper, and has a taste for expensive clothing and styles that showcase her figure. 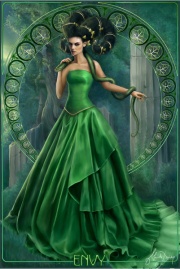 Sometimes, a gun's all you need to wear.

Ali's snooty, self-entitled, extremely vain and narcissistic, and occasionally bitchy. She's used to getting what she wants, when she wants, and without any real justification.

She's happiest when she's 'showing off' something that she has, that others cannot have. This can be anything from a dress, to a car, to a lover. She measures her status by how many people want what she has, and are 'following her lead'. She's extremely pleased that Professor Fairchild has agreed to be her mentor in Sigma Iota Nu, because she regards the woman as "perfection", and thinks "now everyone will be jealous." It's clear to everyone else that Ali's smitten with the older woman, and is accepting her every word as gospel.

If crossed, she goes out of her way to inflict pain and cruelty on whoever 'wronged' her. But normally she's not cruel for the sake of cruelty.

She's never really been supervised or disciplined, so will probably act outraged or break into tears the first few times she is 'corrected'. However... she is intelligent, and to a certain degree empathic. So there's a chance she'll learn... and then store the lessons for when she is in charge.

Due to certain bad experiences she's had, she does not trust men, and will not sleep with them or allow them to get her drunk, high, or otherwise incapacitated. Her own crew knows not to make passes, as the last fellow that tried to force the issue got 2 9mm rounds in his crotch region.

Ali has no mental defenses whatsoever. A telepath can pretty much reach right in and start planting suggestions, commands, or even entire memories. She will become confused if these conflict with what she 'knows'... but if detailed enough, a memory construct can be fed to her that doesn't make her feel odd. Her posse knows this, and has learned to look for signs of tampering or attack, and while they can be controlled as well with effort, there's enough to start shooting. Whether they get the right target is another question entirely.

Ali's in good physical shape, but she's human. Therefore, she's rather frail by metahuman standards. Only the medicom device has kept her from becoming a statistic.

She has a slight addiction to Ecstacy, and has gone 'cold turkey' to get clear of it. Her withdrawal is being eased by endorphin release therapy[1].

She also is not very skilled in reading or writing, and functions at an 8th-grade level. Her math is tolerable, although she likes to stick to multiples of 5 or 10.

Alistaire receives her funding from her father, due to a certain 'arrangement'[2] she has with him.

Although Ali owns a Kelly green Lambo LP640SV Murciélago Sport Veloce, there's no real place to drive it in the Isles. So, we'll have to come up with an explanation for her travel power (flight). Perhaps she's using / testing one of Miss Fairchild's antigravity devices?

Heard something juicy about 24-Karat Bombshell? Why not add it here?

Rendered in Poser 5, using add-ons from Daz and Content Paradise.

This image is a work in progress.