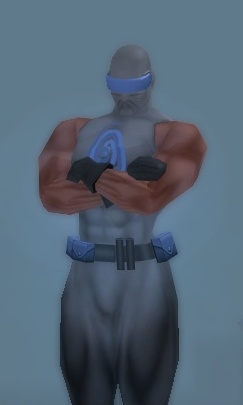 A homage to the Sandman, Airbound gained his powers when he was hit by a teleporter ray and had his body pass through a barrel of toxic waste. Now he's finally getting a second chance at a life of crime, and he's not going to waste it. He's my first ever Stalker and so far, he's been a blast. I can't see where all the Stalker hatred comes from.

Blair Winter and Conrad Morse were two people from opposite lifestyles that had turned to a life of crime. Blair's family was amongst the upper class in England. Naturally, Blair grew up to be spoiled so it came as a surprise to her when her parents kicked her out of the house. Not being able to cope with having no money, she moved to America to start a new life for herself. Conrad on the other hand, had lived in Kings Row all his life. Conrad's mother passed away during childbirth, so he was raised by his alcoholic father who would beat him constantly.

The two met when they were both hired to help rob a bank. They had both delved into a life of petty crime beforehand, but this was their first big heist. The two hit it off almost immediately and shortly after the bank robbery, they began to work together regularly. They did everything from armed robbery to kidnapping. They had become so infamous that the citizens of Paragon City commonly referred to them as the modern day Bonnie and Clyde. It was when things were just getting out of hand that they began to slow down.

As it turns out, Blair was expecting a child. Not wanting to endanger the life of their son, the couple settled down in Founders' Falls and got married (under assumed names of course). Of course, when they say crime doesn't pay, they mean it. The couple was eventually tracked down and thrown in jail. Their son (who was 4 at the time) was sent to live in an orphanage in Kings Row.

Clyde didn't do well in the orphanage. Even though they weren't supposed to, all the other children knew who he and his parents were. It's not very easy to get adopted when everyone that comes in knows you as the son of two of Paragon City's most famous criminals. He lived in the orphanage for about 12 years without getting adopted. Soon after he got to be 16 and began to drive, he left the orphanage. He left no notes, no phone numbers, nothing. He packed up and drove off in one of the orphanage worker's cars.

Clyde drifted for a while after his escape. He became a petty criminal and resorted to mugging civilians and robbing convenience stores. After that didn't work, he settled down and actually got a job, albeit a job as a waiter at El Super Mexicano. Clyde earned very little, but it was enough to pay for a small apartment in King's Row. Clyde knew that he couldn't continue to live like this, and so he devised a plan that would hopefully turn his life around.

Volker Tech was a rapidly growing company created by Dr. Henry Volker. The company specialized in creating gadgets and serums that allowed your average person to do things that supers could do. Clyde had the bright idea to sneak into one of their labs and steal whatever he could find, gadgets, money, anything.

Of course big companies don't leave their factories without good security and Volker Tech was no exception, but when you're the son of two famous criminals, you're almost guaranteed to be able to sneak in and out of places. Clyde was a natural, dodging the security cameras and armed guards he sneaked in looking for a safe of some sort. What he found was much better.

The room was large and mostly empty, save for a few consoles on one side and what looked like a large laser in the middle. Clyde knew that he was racing against the clock and that any minute, one of the armed guards would walk by, but something about the laser intrigued him. He walked up to it and examined it curiously. You'd think he'd never seen a sci-fi movie in his life, but sure enough, Clyde's curiosity got the better of him and he flipped the switch on the laser.

Almost immediately, the laser whirred to life. Shocked, Clyde took a few steps back and tripped over his feet. That's when the laser turned on him and zapped him. At first he thought he was a goner, but then he realized that he wasn't dead, just lighter. He looked around. Nothing was out of the ordinary. Why, the only thing that was missing was him! Before he could think about it, he lurched forward like a gust of wind. As he moved, he noticed that he one on a collision course for a barrel marked 'TOXIC WASTE'. Now, Clyde had in fact seen several sci-fi movies, and he knew that touching toxic waste was always a no-no, but in this situation, he was unable to stop as his molecules passed right through the barrel.

As Clyde reached the other side of the room he noticed his body slowing down. Before he could think about what just happened, the lights in the room flooded on as one of the guards walked in. Clyde froze, or he would have, if he knew how to in his current state. Luckily it wasn't necessary, the guard looked around, but he didn't see Clyde and with a shrug, he walked out again.

Now that Clyde was alone again, he set his mind to the problem at hand. He was invisible or something, and he didn't know how to reverse the effects. He concentrated with all his might in an attempt to become visible again. Slowly, very slowly, he began to become visible. After what seemed like an hour standing there concentrating, Clyde was fully visible again. After that he wasted no time in his escape. He didn't even stick around to find the money, he just ran.

Clyde lay in bed that night thinking. He thought about his botched robbery and he thought about the laser. As his mind began to wander, he felt a peculiar sensation. He looked down at himself to find that he wasn't all there! His body was beginning to dissipate right before his eyes. Horrified, Clyde concentrated on one thing in the hopes that it would bring him back together and sure enough, it did.

Clyde is actually a pretty quiet guy. He's not one to deliver long monologues or use flowery words. He tends to say exactly what he needs to say, and doesn't like to beat around the bush.

Despite now having superpowers, he's kept the same small-time criminal mentality. He has no plans for world domination and could care less who was running things as long as he wasn't affected too much. He just believes the world owes him for such a hard life, and he intends to see that the debt is repaid, whether he has to use force or not.

Airbound's namesake ability is the power to split his body's atomic structure up and then scattering his atoms into the air, rendering him "invisible" to the naked eye as well as most other forms of stealth detection. With this ability, he can pass right through the cracks between a safe and the wall to get to the loot on the other side. The ability does have it's limits, he can't see when his body is broken up, and he has a tendency to be pushed around at even the slightest gust of wind. To counteract this, however, Airbound does have some minor control over wind and air. He can alter the currents around him so that his body is pushed in the direction he wants to go. Sometimes, he can even suck the air out of his enemy's lungs. The more people that he does this too though, the harder it becomes.

After Clyde found out that it was impossible for him to break apart his clothing like he can with his body, he returned to the Volker Tech lab that he had attempted to rob and demanded that they create a suit for him. The Aerosuit utilizes the same technology that gave Clyde his powers. It was designed in such a way that all of it's particles are not completely meshed together. This way, when Clyde breaks apart the atoms of his body, the Aerosuit is broken apart as well.