Alessar is a peacebringer associated with the Crew of the Galactic Pelican and is on good terms with the Paladins of the Night. He is a square-jawed classically handsome "Good Guy" who enthusiastically protects the weak from anything that threatens them.

Supergroup: and the Crew of the Galactic Pelican

Relatives: No true relatives, but used Nocturne XIII as a biological template

Former associations: The Legion of LiveJournal

Alessar is essentially a tabula rasa slowly rebuilding a new core personality. Because of this he shifts from a very simplistic almost innocent personality to a persona based on one of his inspirations.

Alessar wields the light energy manipulation abilities typical of a Peacebringer. However, he does evince two distinct patterns of their use which may be tied to his personality shifts. He primarily functions in either Bright Nova or Human forms. In either form he is extremely dangerous and pushes the upper limits of the innate Kheldian ability to unleash energy. It is theorized that due to instabilities in his energy matrix, he constantly outputs slightly greater than 15% more energy than is normally considered safe for a Peacebringer.

Unknown but seems familiar with technology more advanced than currently exists on Earth. Has subconscious knowledge of Kheldian nature and technology.

The being now known as Alessar is one of a handful of Peacebringers who were captured and forcibly separated into their Human and Kheldian parts and survived the experience. The Warshade Nocturne XIII and the Paladins of the Night rescued Alessar from his Nictus captors, but irreparable damage had been done. Huge portions of both psyches were destroyed and forcibly rebonding the separated entities did not reverse this damage.

Alessar was sent to an extended care facility where he laid in a vegetative state for weeks. In this time, a TV was left on nearby to provide mental stimulation. One program in particular registered to the damaged mind of the peacebringer, and that was the 1950s sci fi serial "The Adventures of Captain Saturn." Perhaps the human host had watched this as a child; perhaps the Kheldian portion found resonance in the outer space adventures. Whatever the case, one day the Kheldian ability to transform matter and energy activated and the former entity (code-name unknown) disappeared, replaced by a revived "Captain Saturn" who bears no resemblence whatsoever to the original human form and instead looks like a buffed up version of the television character (but which is actually a duplication of his Warshade rescuer).

Alessar at this point did not have any clear memories of his life as a Kheldian, or a human, but had assimilated some of the sci fi serial's episodes as part of his memories. As time passed it became clear that either he was a prodigy at shapeshifting or his psyche was more unstable than previously believed when he demonstrated the assumption of the persona of the "Angel" from Barbarella and one of the cast of Miami Vice. Later, he encountered the Crew of the Galactic Pelican and apparently his mind has now retconned him as an officer of the ship, integrating all the other personas as "cover identities." To that end he applied for a real job with the PPD (not as an Awakened officer) and eventually was given a regular (but part time) appointment and the department mostly has him focus on publicity appearances, which he seems fine with.

Alessar is becoming more stable all the time and seems to be staying more and more in the persona of a ship's crewman.

Alessar is a strapping, muscular man 6' 6" tall with lemon-blond hair and ice blue eyes. At times, he manifests white and cerulean angelic-looking feathered wings. His body is an almost exact duplicate of the Warshade Nocturne XIII with the appearance of the TV character "Captain Saturn" mapped on top of it. His original human body was as a slightly-built man in his early twenties, approximately 5'8" tall with dark hair. 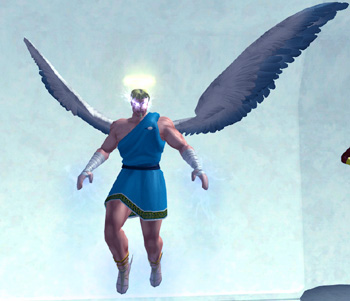 His usual uniform is an update of the Captain Saturn costume. He has dispensed with the 1980s cop look since he began a regular job. Technically, he holds the rank of Captain. 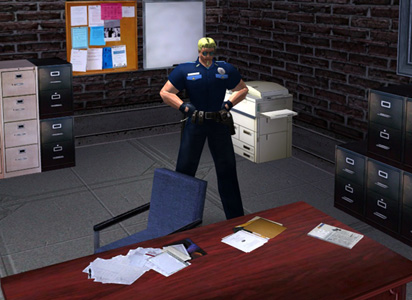